For Immediate Release
Office of the Press Secretary
May 18, 2005 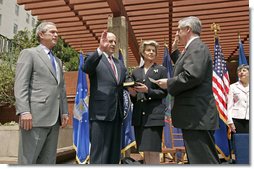 I want to thank Congressman Peter Hoekstra, Chairman of the House Permanent Select Committee on Intelligence, along with Congresswoman Jane Harman, ranking member. Thank you both for coming. I appreciate Chuck Robb, Co-Chairman of the WMD Commission, for joining us today. I want to thank members of the intelligence community who have joined us. I thank the rest of you for coming, too. (Laughter.)

Ambassador Negroponte's position is one of the newest in the government, and one of the most demanding. Our nation is at war, and John is making sure that those whose duty it is to defend America have the information we need to make the right decisions. He's ensuring that our intelligence agencies work as a single, unified enterprise. And he's serving as my principal intelligence advisor. These are vital and urgent responsibilities, and John has what it takes to fulfill them all.

In his distinguished career, John has represented America in eight nations on three continents. He's served every President since Dwight Eisenhower. Over the past four years, I've come to know John's wisdom, intellect and integrity. I've relied on his candid judgment to help solve complicated problems. I have witnessed his unique ability to bring people together, most recently in his historic achievements as ambassador to a free Iraq. I'm grateful to John for answering his nation's call. I thank his family for joining us today.

John is fortunate to count on an experienced and capable deputy in General Mike Hayden. General Hayden understands the intelligence community from the ground up. He has a long record of wise and effective reform. Mike also has a clear understanding of our enemies in the war on terror. He'll be a superb deputy to Ambassador Negroponte. I thank Mike for his willingness to serve, and I'm glad to see his family, as well.

As John Negroponte and Mike Hayden carry out their new duties, they're relying on the thousands of dedicated professionals working in our intelligence community. These men and women serve America with a wide variety of talents and expertise. They all report to work everyday with the same goal: to protect our fellow citizens from harm. Intelligence officers work in secret, and often at great risk to their lives. Their vigilance and bravery are vital to America's security. And on behalf of all Americans, I thank them and their families for their service in the cause of freedom. 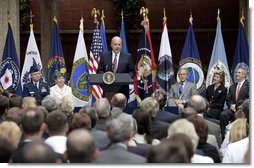 As Director of National Intelligence, John is taking action to help all who serve in the intelligence community to do their jobs more effectively. He has assembled a strong leadership team that reflects a wide range of skills and intelligence experience. He's visited a number of intelligence agencies, he's listened to experts in a variety of fields and he's made reforms in the daily intelligence briefing. John recognizes and values the contributions of all who collect and analyze intelligence. He will ensure that they have access to the tools and information their missions demand.

In the days ahead, Ambassador Negroponte and General Hayden will continue the structural reforms of our intelligence community that began after September the 11th, 2001. We've now implemented the vast majority of the 9/11 Commission's recommendations through executive orders, and the intelligence reform bill I signed last December.

My administration is also reviewing all the recommendations made by the Silberman-Robb Commission on weapons of mass destruction. We have already begun to implement a number of their recommendations. We will continue to evaluate and act on the commission's useful blueprint to improve the quality and quantity of intelligence we collect, and to be able to analyze that information more thoroughly.

John Negroponte will also ensure the sharing of information among agencies and establish common standards for the intelligence community's personnel. I have confidence in John Negroponte and Mike Hayden to carry out these vital missions. Well-integrated, effective intelligence efforts are America's first line of defense against the threats of the 21st century.

Congratulations to both men. May God bless you and your families, and may God continue to bless our country. (Applause.) 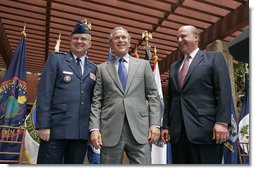 As parents, Diana and I want our five children to have as much freedom, peace and opportunity as we, ourselves, have had. We know every other American parent feels the same way. So I view the position of Director of National Intelligence as a challenge, yes, but I'm grateful to you, Mr. President, for asking me to accept it. In so doing, I am reassured by the fact that I will be supported by tens of thousands of patriotic professionals in the intelligence community who have dedicated their lives, often at great personal risk, to the defense of our country and all that it stands for.

I want to thank each and every one of you for being here today. Thank you very much. (Applause.)