For Immediate Release
Office of the Press Secretary
May 15, 2005

THE PRESIDENT: Thank you all. Thank you for the warm welcome. It is an honor and a privilege to join you to pay our respects to our nation's fallen law enforcement officers. Every year at the National Law Enforcement Officers' Memorial, we add names of those who have been lost in the line of duty. All of these men and women served the cause of justice. Our nation stands in admiration and gratitude for their service, and we ask God's blessings for the families and friends they have left behind. 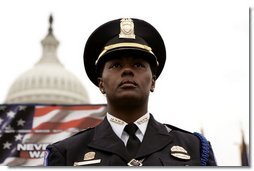 I appreciate the members of Congress who are here. I want to thank Majority Leader Bill Frist; Senator Pat Leahy. Congressman Dave Reichert, from Washington, is here with us. He served as a law enforcement officer for over 30 years, and received the 2004 National Sheriffs Association Sheriff of the Year Award. Congressman, I appreciate you coming, along with other members of the Congress.

I especially want to thank Darryl Worley for his beautiful performance of "I Miss My Friend."

There are more than 800,000 men and women who serve as law enforcement in this country. When these brave Americans take the oath to serve and protect their fellow citizens, they answer a vital calling and accept a profound responsibility. Since America's early days, the badge has represented a pledge to protect the innocent -- and Americans honor all who wear that badge.

The tradition of sacrifice and service runs strong amongst law enforcement. The fallen officers we honor this afternoon honored that tradition of service and sacrifice -- and the flag of the United States of America flies at half-staff today in memory of their courage.

I thank all the family members who are with us today. Our nation is grateful to you. We pray that you find strength to bear the loss. And you can know that our nation will always remember and honor the ones you loved.

I also thank all the law enforcement officers who have come here today to pay tribute to fallen comrades. The bonds between officers are strong -- and you look out for each other on sunny mornings and in the shadows of danger. Your loyalty to one another and your service to America do great honor to our system of justice. Thank you for your service.

We're a nation built on the rule of law, and the men and women who enforce those laws uphold America's role as a beacon for fairness and peace. And, today, we honor 415 new names added to the memorial wall. 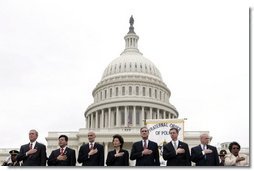 Among them are Detroit police officers Matthew Bowens and Jennifer Fettig. The officers were making a routine traffic stop when the suspect opened fire. Though Officer Bowens had already been shot several times, himself, his first concern was for his injured partner. Both officers gave their lives in protecting each other and their fellow citizens, and this nation of ours will always honor them.

Danger to law enforcement can come from the outskirts of a community, as it did to Bradford County Pennsylvania Deputy Chris Burgert. He and his partner, Deputy Mike Van Kuren, were shot last March while trying to serve a bench warrant on a known criminal. Chris had been leading a drug investigation that often brought him face to face with danger on rural back roads. And his bravery had brought a string of successes against a dangerous and volatile set of criminals. His acts took unusual courage, and our nation will be always grateful for his sacrifice.

Danger can come even in what one thinks is routine investigation. Last May, Arizona police officer Don Schultz was diving for evidence in a murder case when he lost his life. Officer Schultz had been on the force for 19 years and was one of the department's master divers. He died in an act of devotion to duty that was common to him, and will always remain extraordinary to us. These are just the examples of the brave we honor today.

Every generation of Americans has produced men and women willing to stand watch over the rest of us. Every generation has lived under the protection of law enforcement. We must never take for granted the police officers of America. (Applause.)

For each friend or family member here today, the engraving on the wall will always glow brightly around one name. We cannot soothe your grief or repay your loved one's sacrifice -- but their names are inscribed permanently on this memorial. We acknowledge the lasting debt we owe them, and offer the solemn thanks of a grateful nation.

May God bless you all, and may God continue to bless the United States of America. (Applause.) 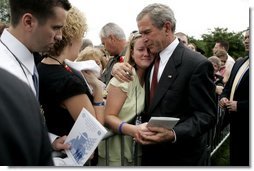