For Immediate Release
Office of the Press Secretary
May 11, 2005

THE PRESIDENT: I thank the members of Congress for coming down to give me and the Secretary of State a chance to talk about our recent trip to Europe. It was a great trip, and it's such an honor to represent the United States.

Sitting in Red Square honoring the veterans of World War II was an amazing event. I remember as a kid watching the missiles parade through Red Square -- and here I sat as the President of the United States in Red Square, paying homage to people who died to defeat Nazism. And I was sitting beside a friend. Russia is not an enemy; Russia is our friend. And it's important that we work together to achieve peace. Obviously, we have a difference of opinion on certain issues, but we don't have a difference of opinion on working together for peace. 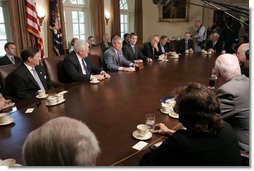 I went to the Baltics, had a great trip to Latvia. It's such an inspiring experience to be in countries that are newly-minted democracies that love freedom. And I met with civil society advocates. I look forward to briefing you on the situation that this young democracy faces in making sure that all people are participating in the democracy.

Went to The Netherlands. Her Majesty kindly came and visited, paid a visit with us. I laid a wreath with Her Majesty, honoring the U.S. soldiers who died at the end of World War II. Interestingly enough, some of my father-in-law's unit were there, and it was neat for Laura to be able to hug them and to remember her dad, as she paid tribute to the veterans.

Then I went to Georgia. It was -- standing in front of 150,000 people that love freedom was a fantastic experience.

The lessons of World War II is to honor the sacrifice of those who helped us keep the peace, and to remember that the United States is always the beacon of freedom, and that when we find people living under tyranny we've got to work to free them in order to make the world more peaceful.

And so I want to thank you all for coming. I look forward to briefing you in specific on some of the conversations I had and I'm looking forward to your comments, as well.