For Immediate Release
Office of the Press Secretary
May 4, 2005

THE PRESIDENT: Bienvenidos. (Applause.) Laura and I are honored to host so many distinguished Hispanic Americans, and Mexican leaders here in the Jardin de Rosa. (Laughter.) Welcome to the White House. The way I see it is mi casa es su casa. (Laughter and applause.) I always look forward to Cinco de Mayo, especially because it gives me a chance to practice my Spanish. My only problem this year is I scheduled the dinner on quatro de Mayo. (Laughter.) Next year I'm going to have to work on my math. (Laughter.) 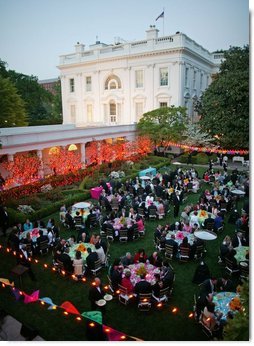 These guys said they want to get to know you, Eduardo. (Laughter.) By the way, Eduardo has been announced, and upon Senate confirmation will become the U.S. Ambassador to Spain. (Applause.)

Cinco de Mayo commemorates a joyful moment in Mexican history. Tonight we're proud to celebrate that moment together. The United States and Mexico are united by ties of family, faith in God, and a deep love for freedom.

More than 25 million men and women of Mexican origin now make their homes in the United States. And they're making our nation more vibrant and more hopeful every day. Mexican Americans have enriched the American experience with contributions to music and dancing and the arts. Latino entrepreneurs are starting their own businesses all across America, and are creating jobs and trading in freedom with businesses across borders. More Hispanic Americans own their own homes today than ever before. And Mexican Americans are firmly committed to leaving no child behind in America.

Mexican Americans are also strengthening our country with their patriotism and service. Thousands of Mexican Americans have sacrificed in the Armed Services for our freedom. And more than 8,700 men and women born in Mexico now wear the uniform of the United States military. (Applause.) These dedicated men and women are making America safer, and they're making the world safer. And they're carrying on the courage and devotion that inspired an outnumbered band of Mexican soldiers to victory in the Battle of Pueblo on the cinco de Mayo, 1862. 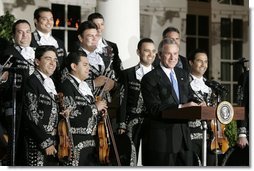 Here at the White House, the triumph of Cinco de Mayo was recognized by President Abraham Lincoln. And through the generations, Americans have continued to look on our neighbor to the south with fondness and deep respect. Tonight we look to the future with confidence in our warm and growing friendship. And so now it is my pleasure to offer a toast: May God bless the people of Mexico, and all the sons and daughters of Mexico who call America home. Que Dios los bendiga.