For Immediate Release
Office of the Vice President
May 2, 2005

THE VICE PRESIDENT: Thank you. (Applause.) Thank you very much. Please be seated -- if you've got a chair. (Laughter.)

Well, thank you very much. And good afternoon, Mike and Connie. I thank you for your kind words, and for the great service that you render the country. And I want to thank also, Connie, your fine staff, the faculty members, and all of you that are here today and have taken the time to come out. I'm pleased, as well, to be with my good friends Saxby Chambliss and Jack Kingston. They do a superb job for Georgia and all the folks here. And they're great friends of law enforcement, as well.

I appreciate the warm welcome to Glynco. And the whole nation appreciates the men and women who come here for training, as well as the instructors and staff who devote so much energy and effort to their jobs, year in and year out. This is an absolutely first-class training center. Its contribution to the country is more vital today than it's ever been. You're doing great work for the American people, and I'm honored to bring congratulations and good wishes to all of you from our President, George W. Bush.

I've been looking forward to the trip for a long time, and we've had a great afternoon. It's been 35 years now since the Federal Law Enforcement Training Center was established to provide high quality, consolidated training to men and women in law enforcement careers. Since that time, more than a half million officers and agents have graduated from FLETC -- including more than 85 percent of the federal law enforcement workforce.

Before long, those of you now in training will join other graduates in assignments throughout the government. Wherever that assignment might be, you can leave here knowing that you've been drilled and tested -- and found to be worthy. And when the big challenges come along in your day-to-day work, you'll be ready to face them squarely and decisively.

This training center has been critical to the improvements we've made in law enforcement and national security since the attacks of September 11th. That morning in 2001 changed everything for our country, as we began fighting a new kind of war against determined enemies. The terrorists behind 9/11 have declared their intention to kill great numbers of innocent Americans, and they seek ever more deadly means to do so. This continuing threat demands a comprehensive, effective response to make this nation better able to respond to any future attacks, to reduce our vulnerability and, above all, to hunt down the terrorists before they can hit us again. 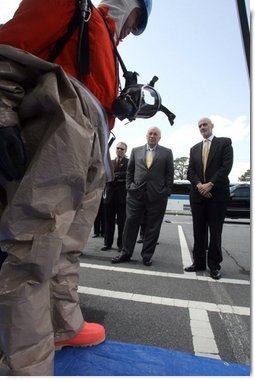 In the 44 months since, we have seen unrelenting effort to defend the freedom and the security of the American people. In a multinational campaign, we continue to make progress in many categories -- financial, legal, military, and otherwise. We are dealing with a network that has had cells in countries all over the world -- yet bit by bit, by diplomacy and by force, with our allies and partners, we are acting to shrink the area in which terrorists can operate freely.

Many countries have joined us in tracking the enemy, disrupting plots against America and our friends, destroying the training camps of terror, and closing off their access to funding. With strong partners at our side -- and with the skill and the honor of the finest military in the world -- we have removed two brutal regimes. We have persuaded another regime to voluntarily abandon its weapons of mass destruction programs. We have uncovered a sophisticated, large-scale network selling nuclear weapons technologies on the black market -- and we have shut that network down. The United States has acted decisively, and we have sent a clear message: We will not stand by and allow terrorists to find safe haven, or to gain weapons of mass murder to use against us.

The war on terror also has a home front, and we have taken extraordinary measures to protect the American people and our homeland. We've increased funding for first responders tenfold since we took office, to make sure they have the training and the equipment for WMD detection, and the ability to move quickly against chemical or biological attack. We've begun Project BioShield, to develop new vaccines and treatments against biological weapons. We've passed the Patriot Act, so law enforcement can fight terrorists with the same tools that we use against organized crime and drugs. We are reforming our intelligence agencies to ensure that they work as a single, unified enterprise, under the leadership of the Director of National Intelligence. And we've created the Department of Homeland Security, the largest reorganization of the federal government in over 50 years.

DHS, now ably led by Secretary Chertoff, merged together some 180,000 men and women from more than 20 agencies. Standing up this department has been a massive, necessary undertaking. And all Americans can be proud of the result. Our nation today has better security at our borders and airports. We have more sophisticated monitoring of ports of entry and incoming containers. And elements of our critical infrastructure -- such as power plants, bridges, and tunnels -- are also watched over more closely than prior to 9/11. 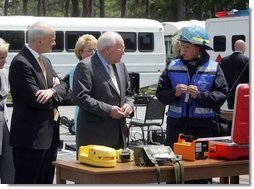 Yet for all of these improvements in security, we must realize -- as the 9/11 Commission put it recently -- that America is safer, but that we are not yet safe. Every morning President Bush and I receive an intelligence briefing, and we review threats tracked during the previous 24 hours. Several times a week we meet with Mike Chertoff, the Director of the FBI, and the Director of the CIA. The enemy that appeared on 9/11 is wounded and off-balance, and on the run -- yet still very active, still seeking recruits, and still trying to find ways to hit us. As months and years pass, they are hoping that our country will grow complacent, and get lazy, and forget our responsibilities. And it's our job, ladies and gentlemen, to make sure the United States of America never lets down its guard.

Vigilance, and professionalism, and adaptability are critical to national security, especially in times of war. And they are watchwords of the Federal Law Enforcement Training Center. I can tell you that I've been immensely impressed by the work that goes on here -- not just from what I've seen today, but from all I've observed over the years, particularly in the urgent period since 9/11. In addition to all the traditional training provided here, you've stepped up to meet the needs of a new and very different era for law enforcement. For the first time the President has made countering and investigating terrorist activity our nation's top intelligence and law enforcement priority. We've had to move quickly to develop the equipment and procedures to protect against WMDs, radioactive material, and vehicle-borne explosives. We've needed a mock port of entry complex, and new training for flight deck officers, federal air marshals, TSA screeners, and visa security officers.

We've also needed to make law enforcement officials familiar with Man-Portable Air Defense Systems, and to get started on a major new Counterterrorism Operations Training Facility. All of this, and a great deal more, has been carried out by FLETC, and I can say with complete confidence that your work is paying off. 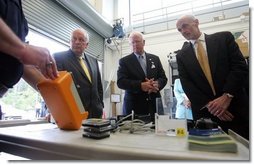 It's in the nature of your business -- as in intelligence and national security -- that many of the wisest judgments and the best work go unrecognized until years after the fact, if ever. And we may never know what horrors this country has been spared because of the extra effort, creativity, and determination of the men and women who serve America in public safety, intelligence, and national security. But the President and I want you to know that we realize how hard you're working. We never take it for granted. And the country is very grateful.

We're all grateful, as well, to the men and women of our military. I know that a good number of the people who work and train here are veterans, and others have family members serving in the armed forces today. I've had many opportunities to meet with servicemen and women, from military bases at home and abroad, to the deck of an aircraft carrier in the Arabian Sea. They are as motivated and focused as I have ever seen them. Several years ago I was asked to speak to the class of 2002 at the United States Naval Academy. The attack on America had taken place, of course, earlier in their senior year. And I was told that on the morning of September 11th, every midshipman in the brigade at Annapolis had the same wish, that he or she could graduate on September 12th, and take the fight to the enemy.

That kind of commitment, that kind of devotion to the freedom and security of the American people defines our military. And it defines the men and women who serve the United States as sworn law enforcement officers. At a time when so many are searching for greater purposes in life, we can point to people like all of you as examples. I appreciate the chance to be with you this afternoon to thank you for your fine work, your idealism, your sense of duty, and the great credit that you reflect on the United States of America.