For Immediate Release
Office of the Press Secretary
April 21, 2005


I commend the Senate for moving quickly to confirm John Negroponte as the first Director of National Intelligence. I congratulate John on his confirmation, and I look forward to working closely with him. As the DNI, Ambassador Negroponte will lead a unified intelligence community as it reforms and adapts to the new challenges of the 21st century. The United States continues to make progress in the global war on terror against the enemies of freedom who target innocent civilians and seek weapons of mass destruction. I appreciate John's willingness to once again serve his country and the many men and women who serve in the intelligence community. 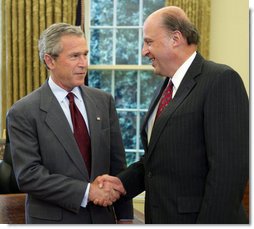