For Immediate Release
Office of the First Lady
April 21, 2005

MRS. BUSH: Thank you, Regan, and thanks, everybody. Thank you all for being here. Thanks so much. Thanks, everyone. 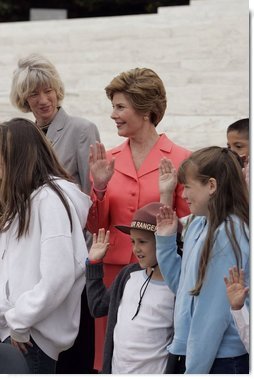 I've hiked in the national parks for my whole life, and it's been a very, very important part of my life, hiking in our beautiful western national parks, in our parks that are in Texas, and that -- some of the ones, a few of the ones, I've walked on these ones that are right here in our nation's capital.

I want to recognize Secretary Gale Norton, Secretary of the Department of Interior for such a terrific job that you've done. Gale, thank you very, very much. (Applause.) And Fran Mainella, who is the Director of the National Parks. Franny, thank you so much. Fran and I had the chance to hike together in Death Valley just a few weeks ago at the very height of the wildflower season there. And Fran, you've done a great job. Thank you very much. (Applause.)

And Vin Cipolla is the new President and CEO of the National Park Foundation, and welcome aboard, Vin. Thank you very much for your good work. (Applause.)

And Nancy Bechtle, who just spoke to you, who is the Vice Chair of the National Park Foundation is doing a really wonderful job for the national parks, so thank you, Nancy.

The Junior Ranger Campaign is the latest example of a really great private-public partnership that helps all Americans, but especially children, appreciate our historical and national landmarks that are our wonderful national parks around the country. I'm proud to be the honorary chair of the National Park's Junior Ranger program, now called "Connecting our Children to America."

This site, the one that's right behind us here, honors our nation's third President, Thomas Jefferson. Jefferson had a very grand vision for America, and with the Louisiana Purchase in 1803, Jefferson nearly doubled the size of our country. He sent two explorers right from the White House, Meriwether Lewis and William Clark, to chart a course through all of these new lands to the Pacific. Lewis and Clark reported more than 300 new discoveries to scientists and to the public back here on the East Coast.

Today, America's national treasures are being explored by a whole new generation of adventurers. National parks, national forests, national seashores, America's historic sites are as diverse as our nation itself. There are enough sites to keep even the most active explorers busy for a lifetime.

As Junior Rangers discover our parks, they learn lessons about history, culture and science. Buildings like Independence Hall in Philadelphia and this memorial to Thomas Jefferson offer information about America's Founders. The Martin Luther King, Jr. National Historic Site in Atlanta tells the story of an American hero. The redwood forest in California and Glacier National Park in Montana, formed over thousands of years, teach lessons in geology and botany. Junior Rangers can also go online and become Web Rangers and bring the resources of the parks right into their own homes.

Americans have enjoyed our national parks for generations, and future generations deserve to enjoy them every bit as much as we do. We have a shared responsibility to preserve our natural landscapes and keep them in pristine condition for people who will come after us. The Junior Ranger program instills in young people respect for nature and an appreciation for our role in protecting it. And of course, we hope that some of these Junior Rangers will grow up to be real park rangers, dedicating their lives to caring for our national parks. (Applause.)

The best part of the Junior Ranger program is that whole families get involved. They get to exploring national parks together. And we know that children who enjoy visiting national parks with their parents will one day make the same journeys with their own children. Generations of American families can make really happy memories for their children in our nation's most scenic places.

At his State of the Union address, President Bush announced a new initiative called "Helping America's Youth." It's designed to call attention all the ways adults in the United States can help America's youth make healthy decisions for their own lives and for their own future. Introducing boys and girls to the magnificence of nature and encouraging them to spend time with their parents and their loved ones outdoors makes an important contribution to helping America's youth, a contribution that makes our communities and our country stronger.

Thank each one of you for bringing America's cultural, historical and natural heritage to millions of young explorers. Thank you all. (Applause.) 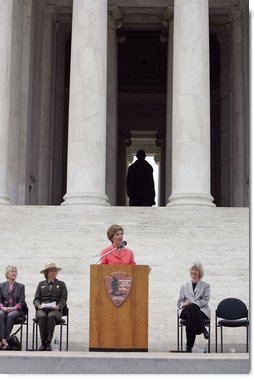