For Immediate Release
Office of the Press Secretary
April 20, 2005

THE PRESIDENT: Thank you. Please be seated. Welcome to the Rose Garden. It is my honor to welcome the Midshipmen of the United States Naval Academy back here again. Coach Johnson told me last year -- he said, "Don't worry about it, Mr. President, we'll be back." (Laughter.) I like a man who keeps his word. (Laughter.) 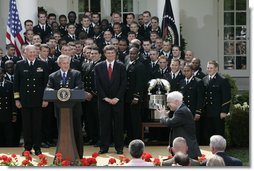 The football rivalry of our military academies is one of the great American sports traditions. Once again, the Midshipmen set a standard of excellence on the field. This team is tough; it is talented; and you knew how to win. You whipped the Air Force Academy in a field goal in the last minute. I was there when you beat Army. (Laughter.) And you won the Commander-in-Chief Trophy again.

I want to thank our guests who are here. A member of the United States Senate is on his way who is a huge Naval Academy supporter, and that would be Senator John McCain. He will be here soon. I appreciate Mike McIntyre from North Carolina joining us. Congressman, thank you for being here. I appreciate Michael Steele, the Lieutenant Governor from Maryland. I appreciate Gordon England, who's the Secretary of the Navy, soon to be, upon Senate confirmation, the Deputy Secretary of Defense. We're glad you're here, sir. And I appreciate Vice Admiral Rod Rempt for your hospitality at the games.

Coach Johnson, welcome back. Congratulations on the award you have won. There's nothing like a good team to make you look good. (Laughter.)

This team will be well-represented in the Navy record books. You won more games than any Navy team in 99 years. That's a long time. (Laughter.) The last time a team of Midshipmen won 10 games the Commander-in-Chief was Theodore Roosevelt -- who, by the way, built the West Wing. You finished the season ranked number 24 in the polls. The last time that happened, that you we're in the top 25, was 1979. None of the players on this team had been born then. You earned a trip to the Emerald Bowl in San Francisco and you beat New Mexico for your first bowl victory in nine years.

You also set -- Senator John McCain. Thank you, sir. (Applause.) Thanks for coming. The thing McCain loved about the Naval Academy was he got to study all the time. (Laughter.) He and I both showed that if you -- people with C averages can succeed. (Laughter.) Welcome.

The interesting thing about the football game at the Emerald Bowl was this -- I happened to watch it -- it was the drive that lasted 14 minutes and 26 plays -- like he kind of redefined the definition of ball control. The team was a source of pride for the brigade of Midshipmen and for Navy fans everywhere. The seniors on this team led one of the most dramatic improvements in college football history. Navy went 0 and 10 during your plebe year, and 10 and 2 this year.

I'd like for the record to show that your turn-around started the year I delivered the commencement. (Laughter.) I'm not, like, taking any credit for it. (Applause.) But I do appreciate the invitation to come back, and I'm looking forward to giving the commencement address this year at the Naval Academy. (Applause.)

You've inspired fans everywhere, so much so that Josh Smith's hometown radio broadcast the Navy games. And by the way, that radio -- that hometown is in Indiana.

The lessons you learned on the football field will prepare you for the win -- helping us win the war on terror. Midshipmen, you've developed leadership, teamwork, and strong character. You know the importance of setting high standards, and you know the importance of training hard to meet those standards. All these qualities will serve our nation well as you become commissioned officers in the finest military the world has ever known. (Applause.)

We are still at war, and many of your former teammates are serving and sacrificing at this very hour. Marines and sailors are leading vital missions in Afghanistan and Iraq and elsewhere. They're interdicting shipments of deadly weapons. They're maintaining America's command of the seas. You're helping to protect this country. And the citizens of America are grateful.

We've lost some of our finest men and women in the war on terror, including several former Navy football players. Our nation will always honor their sacrifice. The American people are safer and the world will be more peaceful because of the honor and courage and commitment of the United States Navy and Marine Corps.

I thank you all for volunteering to serve in a cause greater than yourself. I'm proud of what you achieved on the football field. I am confident that your service will bring even greater achievements in the years ahead. It's an honor to be the Commander-in-Chief of such a fine group of people.

Congratulations again on winning the football trophy, the Commander-in-Chief Trophy. May God bless you all, and may God continue to bless the United States of America. (Applause.)