For Immediate Release
Office of the Press Secretary
April 19, 2005

THE PRESIDENT: Thank you all very much. Thanks for the warm welcome. Laura and I are so very grateful for your generous invitation to be here. Mr. Speaker, thank you for your incredibly warm words. I appreciate your leadership, I appreciate your friendship and so do the people of Illinois. 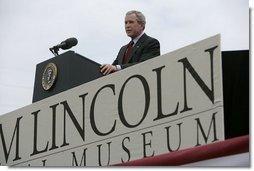 I am so honored to be here to dedicate a great institution honoring such a great American. The Abraham Lincoln Presidential Library and Museum was a long time coming. But as many speakers have said, it's really worth the wait. Laura and I were just given a tour by Richard -- appreciate his leadership, by the way. I guess the best way to describe what we saw is a superb collection; a superb resource for scholars; and an invitation for all, especially the young, to rediscover Lincoln for themselves.

The mission of this library is essential to our country, because to understand the life and the sacrifice of Abraham Lincoln is to understand the meaning and promise of America. Most of you all know, the First Lady was a librarian. (Applause.) Any time she can get me into a library is a pretty good deal, as far as she's concerned. (Laughter.)

It's an honor to be here with our fellow citizens. I particularly want to say thanks to my friend, Jim Edgar, for his leadership to get this museum going. (Applause.) I want to thank Brian Lamb -- C-SPAN happens to be one of my mother's favorite networks. (Laughter.) I particularly want to thank Mihan Lee for standing up in front of us and expressing her words so eloquently about living in a free society. (Applause.) I thank Reverend McLean for his prayers. And I thank you all for coming. All of us have come here today because of our great appreciation for the 16th President of the United States.

In a small way, I can relate to the rail-splitter from out West because he had a way of speaking that was not always appreciated by the newspapers back East. (Laughter and applause.) A New York Times story on his first inaugural address reported that Mr. Lincoln was lucky "it was not the constitution of the English language and the laws of English grammar that he was called upon to support." (Laughter.) I think that fellow is still writing for the Times. (Laughter.) 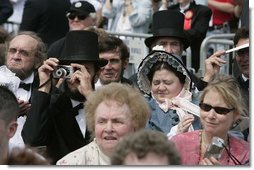 In Washington, D.C., where Lincoln served America and where he was assassinated, we honor his influence in a great temple of democracy. Here in Springfield, in Illinois, where he lived along with Mary, and where their sons were born and where the funeral train ended its journey 140 years ago, we honor his good life in a more personal way. Here we can walk through his house, see his belongings, and read the Gettysburg Address in his own hand. And even across the mounting years, we can sense the power of his mind, the depth of his convictions, and the decency that defined his entire life.

Abraham Lincoln started life in the last month of Thomas Jefferson's presidency, with no early advantages other than curiosity and character. Before history took notice, he earned money as a storekeeper, a surveyor and a post master. He taught himself the law. He established a successful legal practice and rose in a new political party on the power of his words. Those who knew him remembered his candor, his kindness and his searching intellect -- his combination of frontier humor with the cadences of Shakespeare and the Holy Bible. As a state legislator in Springfield, a congressman, and a debater on the stump, Lincoln embodied the democratic ideal -- that leadership and even genius are found among the people themselves, and sometimes in the most unlikely places.

Young Lincoln didn't worry much about how he looked or what he wore. He took great care of the things he said, and Americans took notice beyond the borders of Illinois. In New York City, an eyewitness at his Cooper Union Speech in 1860 said this: "His face lighted up as with an inward fire; the whole man was transfigured. I forgot his clothes, his personal appearance, and his individual peculiarities. Presently forgetting myself, I was on my feet with the rest, cheering this wonderful man."

An ambitious young Lincoln was heard to lament that the great work of the American Revolution was all in the past. When he departed Springfield as President-elect, he spoke of duties perhaps even greater than George Washington faced. Events proved him correct. His very election as President was regarded as a cause for war. And as he sent legions of men to death and sacrifice, Lincoln's own burden began to show in a lined and tired face. Without really knowing, the American people had chosen perhaps the only man who could preserve our unity and assure our future as a great nation. He was the relentless enemy of secession -- without hatred or malice toward those who seceded. He grieved every day at the ruin and waste of war -- yet he knew that even this tragedy could be redeemed by the renewal of American ideals. On Good Friday, 1865, Lincoln did not know it was his last day on Earth. But on that day, he knew that all the sacrifices and the sorrow across the land had meaning, and the Union had been saved. 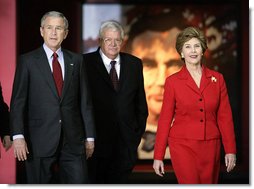 When his life was taken, Abraham Lincoln assumed a greater role in the story of America than man or President. Every generation has looked up to him as the Great Emancipator, the hero of unity, and the martyr of freedom. Children have learned to follow his model of integrity and principle. Leaders have read and quoted his words, and have hoped to find a measure of his wisdom and strength. In all this, Lincoln has taken on the elements of myth. And in this case, the myth is true. In the character and convictions of this one man, we see all that America hopes to be.

Lincoln's career and contributions were founded on a single argument: That there are no exceptions to the ringing promises of the Declaration of Independence; that all of us who share the human race are created equal. At a campaign stop in Chicago, Lincoln said, "If that Declaration is not the truth, let us get out the statute book, in which we find it and tear it out. Who is so bold as to do it? Let us stick to it then, let us stand firmly by it then." This led him over time to confront the great tension in America's founding between the promise of liberty and the fact of slavery. Lincoln was morally offended by what he called "the monstrous injustice of slavery itself." And he believed the permanent acceptance of the institution of slavery would represent the end of the American ideal. He would not accept that our new world of hope and freedom must forever be a prison for millions. And so with the relentless logic and clarity of Lincoln, he pushed his countrymen to choose: Live up to the truth written into human nature by our Creator, or disavow the freedom our Forefathers had earned.

President Lincoln sought every reasonable political compromise that might avoid war -- but he did not believe America could surrender its founding commitments and remain the same country. As his presidency unfolded, this conviction gathered force and urgency until the day he freed millions by signing a proclamation. And then he looked up and said, "That will do." Days before his death in April, 1865, Lincoln spoke from a White House window and declared that the right to vote should be extended to some freed men and African Americans who had fought for the Union. In that audience was a man named Booth, who vowed, this is "the last speech he will ever make."

Lincoln's voice was silenced, but he, more than any other American, had spoken to all the ages and his words have haunted and driven our history. His authority was asserted after the war as we corrected our Constitution and finally ended the great national sin of slavery. Citizens enlisted Lincoln's principles in the fight to bring the vote to women and to end Jim Crow laws. When Martin Luther King, Jr. called America to redeem the promissory note of the Declaration, he stood on the steps of the Lincoln Memorial -- and Lincoln was behind him in more ways than one. From the lunch counter to the school house door to the Army barracks, President Lincoln has continued to hold this nation to its promises. And we will never relent -- we will never rest until those promises are met. (Applause.)

The convictions that have guided our history are also at issue in our world. We also face some questions in our time: Do the promises of the Declaration apply beyond the culture that produced it? Are some, because of birth or background, destined to live in tyranny -- or do all, regardless of birth or background, deserve to live in freedom? Americans have no right or calling to impose our own form of government on others. Yet, American interests and values are both served by standing for liberty in every part of the world. (Applause.)

Our interests are served when former enemies become democratic partners -- because free governments do not support terror or seek to conquer their neighbors. Our interests are served by the spread of democratic societies -- because free societies reward the hopes of their citizens, instead of feeding the hatreds that lead to violence. Our deepest values are also served when we take our part in freedom's advance -- when the chains of millions are broken and the captives are set free, because we are honored to serve the cause that gave us birth. (Applause.)

Sometimes the progress of liberty comes gradually, like water that cuts through stone. Sometimes progress comes like a wildfire, kindled by example and courage. We see that example and courage today in Afghanistan and Kyrgystan, Ukraine, Georgia and Iraq. We believe that people in Zimbabwe and Iran and Lebanon and beyond have the same hopes, the same rights, and the same future of self-government. The principles of the Declaration still inspire, and the words of the Declaration are forever true. So we will stick to it; we will stand firmly by it. (Applause.)

Every generation strives to define the lessons of Abraham Lincoln, and that is part of our tribute to the man himself. None of us can claim his legacy as our own, but all of us can learn from the faith that guided him. He trusted in freedom and in the wisdom of the Founders, even in the darkest hours. That trust has helped Americans carry on, even after the second day of Gettysburg; even on December 8, 1941; even on September the 12th, 2001. Whenever freedom is challenged, the proper response is to go forward with confidence in freedom's power. (Applause.)

Lincoln also trusted in the ways of Providence, the working of an unseen power. He knew the course of Providence is not always what we hope, or ask, or expect -- but he trusted still. In his example, we are reminded to be patient and humble, knowing that God's purpose and God's justice will break forth in time. (Applause.)

Abraham Lincoln had a streak of melancholy in him. He said our short lives are like "the break of the wave." But the wave of his life is still felt in our world. The Union he saved still thanks him. The people he freed still honor him. And here in the place he called home, Springfield, Illinois, we proudly dedicate the Abraham Lincoln Library and Museum.