For Immediate Release
Office of the Press Secretary
April 5, 2005

THE PRESIDENT: Just concluded the second Cabinet meeting of the second term. I want to thank my Cabinet officials for doing such a fine job. I appreciate your hard work, and thank you for your dedication to the country.

Tomorrow I will be leaving for Rome, leading a delegation to attend the services for His Holiness Pope John Paul, II. What a great man. It will be my honor to represent our country in a ceremony marking a remarkable life, a person who stood for freedom and human dignity. 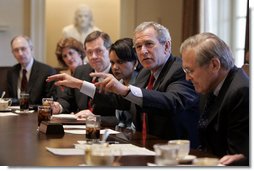 I also urge the Congress to successfully conclude budget negotiations. The House passed the budget resolution; the Senate has passed the resolution. We look forward to working with the leadership to successfully conclude those negotiations. It's important we get a budget, a budget which will show the American people that we will spend their money wisely; a budget that shows that we know how to set priorities -- winning the war on terror, protecting our homeland; a budget that says we can cut the deficit in half in five years; and a budget that will encourage economic growth and vitality.

I appreciate the fact that it looks like that we're going to get a solid cap on discretionary spending, one that we agree with. It's also important for the senators and the members of the House of Representatives to understand that a good, solid budget that helps us meet objectives is one that deals with mandatory spending items. And we've presented some meaningful, realistic, common-sense reforms on the mandatory spending side.

And so, as Congress returns, I look forward to working with them to get a good, solid budget. It's important for the country.

Q Yes, sir. Al Qaeda has claimed responsibility for the attack on Abu Graib prison. Is this a sign that they're becoming more sophisticated in Iraq?

THE PRESIDENT: No, I think it's a sign that they're still deadly, that these people will kill. They kill innocent life. Their strategy hasn't really changed. Their strategy has been one to kill as many innocent people as they possibly can, in the hopes that it shakes our confidence and shakes our will and, equally importantly, shakes the will and confidence of those brave souls who are helping lead this new country -- lead this new democracy.

And we are -- we're after them. And equally importantly, the Iraqi citizens are after them now. More and more citizens understand that these terrorists, like al Qaeda and Zarqawi, don't have their interests at heart. They don't believe in democracy, these killers. They believe in a society in which people aren't going to be free to practice their religion, or free to speak in the public square.

And so I think the American people ought to take heart to know that we have now more allies in defeating these few, and those allies are the Iraqi citizens. And perhaps the most notable step that the Iraqi citizens took toward complete defiance of the point of view of Zarqawi, who is an al Qaeda type, was when they went to the polls.

Q Mr. President, Prime Minister Sharon has said he intends to expand the largest Jewish settlement in the West Bank. Other officials say no construction is imminent. Are you satisfied? And what will you tell Sharon when you see him about the settlements?

THE PRESIDENT: Our position is very clear that the road map is important, and the road map calls for no expansion of the settlements. I'm optimistic we can achieve a peace in the Holy Land. I'm optimistic because I firmly believe that Ariel Sharon wants to have a peaceful partner, wants there to be a democracy in the Palestinian Territories, and I believe President Abbas wants the same thing. And there's a lot of hard work to be done, but we're making progress. And I look forward to meeting the Prime Minister in Crawford to continue to work with the parties to advance peace.

Q Thank you, Mr. President. You mentioned the deficit. Insofar as the deficit has been going up, can you talk about how that affects both the budget resolution talks on the Hill, and what it does to your pitch for Social Security reform in terms of complicating the message and the criticism you've gotten, particularly from Democrats?

THE PRESIDENT: Well, one of the things that people must understand on Social Security is there is a huge unfunded liability of trillions of dollars. In other words, because baby boomers like me are getting ready to retire and we're living longer and we're getting greater benefits, there is a significant obligation of the government. And the fundamental question is, will Congress have the will to take on this very important issue and solve this problem now, before that significant obligation becomes more significant.

Now, we're dealing with the deficit by presenting a good, lean budget that sets priorities. I want to thank Josh Bolten of the OMB, and I want to thank all my Cabinet Secretaries for having worked with the OMB to deliver to Congress a budget that will work on behalf of the American people. And now it's up to Congress. It's up to Congress to show the American people that we have the capacity to de-fund programs which don't work, and fund programs which do work.

And I'm looking forward to working with members of both the House and the Senate. It's going to be an interesting set of negotiations. But we're firm in our belief that we can cut this deficit in half over a five-year period of time, grow this economy, and meet our primary objective, which is defending America.