For Immediate Release
Office of the Press Secretary
April 4, 2005

THE PRESIDENT: Good afternoon and welcome to the White House. Today is a special occasion: We are here to pay tribute to a soldier whose service illustrates the highest ideals of leadership and love of our country.

Sergeant First Class Paul Ray Smith, of Florida, gave his life for these ideals in a deadly battle outside Baghdad. It is my great privilege to recognize his extraordinary sacrifice by awarding Sergeant Smith the Medal of Honor. 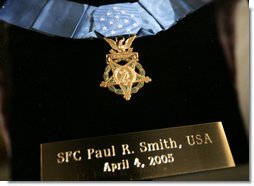 I want to thank the Medal of Honor recipients who have joined us today: John Baker, Barney Barnum, Bernie Fisher, Al Rascon and Brian Thacker. Honored you all are here.

I appreciate Chaplain David Hicks, for his invocation. I want to thank Lieutenant Colonel Tom Smith, for joining us, who was Paul Smith's commander. I particularly want to welcome soldiers from the 3rd Infantry Division, Paul's unit in Iraq.

The Medal of Honor is the highest award for bravery a President can bestow. It is given for gallantry above and beyond the call of duty in the face of enemy attack. Since World War II, more than half of those have been awarded this medal gave their lives in the action that earned it. Sergeant Paul Smith belongs to this select group.

The story of Paul Smith is a story of a boy transformed into a man and a leader. His friends and family will tell you that he joined the Army in 1989, after finishing high school. When he joined the Army, he was a typical young American. He liked sports, he liked fast cars, and he liked to stay out late with his friends -- pursuits that occasionally earned him what the Army calls "extra duty." (Laughter.) Scrubbing floors.

Two things would change Paul's life and lead him to the selfless heroism we honor today. The first would come when he was stationed in Germany and fell for a woman named Birgit Bacher. It turns out that Paul had a romantic streak in him: On the first night he met her, Paul appeared outside Birgit's window singing "You've Lost That Loving Feeling." (Laughter.) In 1992, the two married, and soon, a young soldier became a devoted family man who played T-ball with his son and taught his daughter how to change the oil in his Jeep Cherokee.

Second great change in Paul's life would come when he shipped off to Saudi Arabia to fight in the first Gulf War. There the young combat engineer learned that his training had a purpose and could save lives on the battlefield. Paul returned from that war determined that other soldiers would benefit from the lessons he had learned. 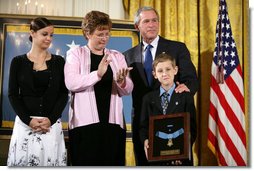 Paul earned his sergeant's stripes and became known as a stickler for detail. Sergeant Smith's seriousness wasn't always appreciated by the greener troops under his direction. Those greener troops oftentimes found themselves to do tasks over and over again, until they got it right. Specialist Michael Seaman, who is with us today, says, "He was hard in training because he knew we had to be hard in battle." Specialist Seaman will also tell you that he and others are alive today because of Sergeant Smith's discipline.

That discipline would be put to the task in a small courtyard less than a mile from the Baghdad airport. Sergeant Smith was leading about three dozen men who were using a courtyard next to a watchtower to build a temporary jail for captured enemy prisoners. As they were cleaning the courtyard, they were surprised by about a hundred of Saddam Hussein's Republican Guard.

With complete disregard for his own life and under constant enemy fire, Sergeant Smith rallied his men and led a counterattack. Seeing that his wounded men were in danger of being overrun, and that enemy fire from the watchtower had pinned them down, Sergeant Smith manned a 50-caliber machine gun atop a damaged armor vehicle. From a completely exposed position, he killed as many as 50 enemy soldiers as he protected his men.

Sergeant Smith's leadership saved the men in the courtyard, and he prevented an enemy attack on the aid station just up the road. Sergeant Smith continued to fire and took a -- until he took a fatal round to the head. His actions in that courtyard saved the lives of more than 100 American soldiers.

Scripture tells us, as the General said, that a man has no greater love than to lay down his life for his friends. And that is exactly the responsibility Paul Smith believed the Sergeant stripes on his sleeve had given him. In a letter he wrote to his parents but never mailed, he said that he was prepared to "give all that I am to ensure that all my boys make it home."

On this day two years ago, Sergeant Smith gave his all for his men. Five days later, Baghdad fell, and the Iraqi people were liberated. And today, we bestow upon Sergeant Smith the first Medal of Honor in the war on terror. He's also the first to be awarded this new Medal of Honor flag, authorized by the United States Congress. We count ourselves blessed to have soldiers like Sergeant Smith, who put their lives on the line to advance the cause of freedom and protect the American people.

Like every one of the men and women in uniform who have served in Operation Iraqi Freedom, Sergeant Paul Smith was a volunteer. We thank his family for the father, husband and son and brother who can never be replaced. We recall with appreciation the fellow soldiers whose lives he saved, and the many more he inspired. And we express our gratitude for a new generation of Americans, every bit as selfless and dedicated to liberty as any that has gone on before -- a dedication exemplified by the sacrifice and valor of Sergeant First Class Paul Ray Smith.

And now if his family would join me, please. Lieutenant Commander, please read the citation.

(The citation is read and the medal is presented.) (Applause.)