For Immediate Release
Office of the Press Secretary
April 2, 2005

THE PRESIDENT: Laura and I join people across the Earth in mourning the passing of Pope John Paul II. The Catholic Church has lost its shepherd, the world has lost a champion of human freedom, and a good and faithful servant of God has been called home.

Pope John Paul II left the throne of St. Peter in the same way he ascended to it -- as a witness to the dignity of human life. In his native Poland, that witness launched a democratic revolution that swept Eastern Europe and changed the course of history. Throughout the West, John Paul's witness reminded us of our obligation to build a culture of life in which the strong protect the weak. And during the Pope's final years, his witness was made even more powerful by his daily courage in the face of illness and great suffering.

All Popes belong to the world, but Americans had special reason to love the man from Krakow. In his visits to our country, the Pope spoke of our "providential" Constitution, the self-evident truths about human dignity in our Declaration, and the "blessings of liberty" that follow from them. It is these truths, he said, that have led people all over the world to look to America with hope and respect.

Pope John Paul II was, himself, an inspiration to millions of Americans, and to so many more throughout the world. We will always remember the humble, wise and fearless priest who became one of history's great moral leaders. We're grateful to God for sending such a man, a son of Poland, who became the Bishop of Rome, and a hero for the ages. 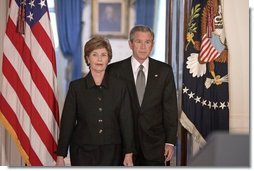