For Immediate Release
Office of the Press Secretary
March 31, 2005

THE PRESIDENT: Today millions of Americans are saddened by the death of Terri Schiavo. Laura and I extend our condolences to Terri Schiavo's families. I appreciate the example of grace and dignity they have displayed at a difficult time. I urge all those who honor Terri Schiavo to continue to work to build a culture of life, where all Americans are welcomed and valued and protected, especially those who live at the mercy of others. The essence of civilization is that the strong have a duty to protect the weak. In cases where there are serious doubts and questions, the presumption should be in the favor of life. 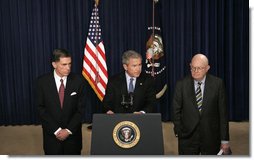 The most solemn duty of the American President is to protect the American people. Since September the 11th, 2001, we've taken bold and vigorous steps to prevent further attacks and overcome emerging threats. We face a new and different kind of enemy. The threats today are unprecedented. The lives of our citizens are at stake. To protect them, we need the best intelligence possible, and we must stay ahead of constantly changing intelligence challenges.

So last year I issued an executive order creating an independent commission to look at America's intelligence capabilities, especially our intelligence about weapons of mass destruction. I asked two fine Americans to chair this commission, Judge Laurence Silberman and former Senator Chuck Robb. They have done an excellent job. I appreciate your service to our country.

I also want to thank the other members of the commission -- Senator John McCain, Rick Levin, Harry Rowen, Walt Slocombe, Bill Studeman, Judge Patricia Wald, Chuck Vest and Lloyd Cutler. I want to thank them for their hard work. They spent a lot of time on this project. I asked these distinguished individuals to give me an unvarnished look at our intelligence community, and they have delivered.

This morning the commission presented me with their recommendations, which are thoughtful and extremely significant. The central conclusion is one that I share: America's intelligence community needs fundamental change to enable us to successfully confront the threats of the 21st century.

My administration has taken steps consistent with the commission's recommendations. In February, I named John Negroponte the first Director of National Intelligence, a post that was created to help ensure that our intelligence community works as a single, unified enterprise. It's important for Congress to move quickly on John's confirmation, because he'll have a key role in the continued reform and restructuring of intelligence capabilities.

Today I've directed Homeland Secretary advisor Fran Townsend to oversee the interagency process, to review the commission's findings, and to ensure that concrete action is taken. The commission report delivers a sharp critique of the way intelligence has been collected and analyzed against some of the most different intelligence targets, especially Iraq. 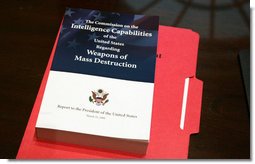 To win the war on terror, we will correct what needs to be fixed, and build on what the commission calls solid intelligence successes. These include the uncovering of Libya's nuclear and missile programs. In Pakistan, our intelligence helped expose and shut down the world's most dangerous nuclear proliferation network. Where we have had success, the commission reports we have seen innovative collection techniques and a fusion of interagency intelligence capabilities. We must work to replicate these successes in other areas.

The men and women of our intelligence community work hard. And the sacrifices they have made have helped protect America, and our nation is grateful for their hard work. The work they're doing is critical. We need to prevent terrorists from getting their hands on the weapons of mass murder they would like to use against our citizens.

And that's why this report is important. It will enable these fine men and women to do their jobs in better fashion, to be able to more likely accomplish their mission, which is to protect the American people, and that's why I'm grateful to the commission for this hard work.

The President and his national security team must have intelligence that is timely and intelligence that is accurate. In their report today, the commission points out that America needs to know much more about the weapons programs and intentions of our most dangerous adversaries. They have given us useful and important guidance that will help us transform our intelligence capabilities for the needs of a dangerous new century.

In other words, we need to adjust. We need to understand the threats and adjust our capabilities to meet those threats. We will work to give our intelligence professionals the tools they need. Our collection and analysis of intelligence will never be perfect, but in an age where our margin for error is getting smaller, in an age in which we are at war, the consequences of underestimating a threat could be tens of thousands of innocent lives. And my administration will continue to make intelligence reforms that will allow us to identify threats before they fully emerge so we can take effective action to protect the American people.