For Immediate Release
Office of the Press Secretary
March 22, 2005 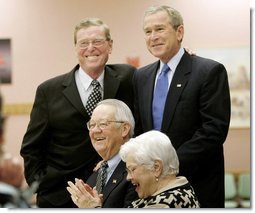 My message to people that are getting their Social Security check is pretty simple, and it's this: The government is going to keep its promise. You don't have to worry about it. I know there are some conflicting messages out there, but it's just not the truth. The truth is you're going to get your checks. The question is whether or not your grandchildren are going to get their checks. (Laughter.) And that's what the Senator and I are here to talk about, because we want to make sure that not only is the safety net solid for you, but that there is a safety net for your children.

But thanks for letting us come by. It's great to see you.

AUDIENCE MEMBER: It's great to see you.

THE PRESIDENT: How were the eggs?

AUDIENCE MEMBER: We have the best cook.

SENATOR DOMENICI: We don't get to eat, Mr. President.

THE PRESIDENT: No, that's right, we've got to go work. (Laughter.)

AUDIENCE MEMBER: Can I shake your hand?

THE PRESIDENT: Yes, sir, you can. Thanks for letting us come by. 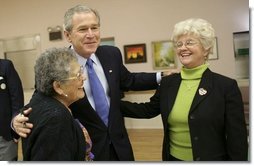