For Immediate Release
Office of the Press Secretary
March 17, 2005

PRIME MINISTER AHERN: Mr. President, First Lady, it's a great honor to be, again, with you on this very special day. St. Patrick's Day is one of joy and celebration for Irish communities all over the world. It's a time when members of the extended Irish family and friends express pride in our homeland and in the bonds that tie us to Ireland. Nowhere is this more true than in the United States, where Irish heritage has been fostered and cherished for generations. Mr. President, we're very honored that we again share this special Irish day with you here at the White House. 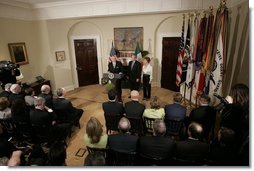 This symbolic ceremony of the presentation of shamrock epitomizes the enduring ties between Ireland and the United States. Today provides a unique opportunity to celebrate our shared heritage, as well as the strength and diversity of our bilateral relations, which continue to prosper and evolve in an ever-changing world.

The shamrock, President, was originally used by St. Patrick as a Christian symbol of unity. It has also become an emblem worn with enormous pride by people of Irish descent, and friends of Ireland, wherever they may be. And this is a heritage and symbol of inclusion that we are proud to share with all traditions on the island of Ireland, in the United States, and indeed, today, around the world.

Mr. President, today we also acknowledge the true and constant friendship which we receive from this country for the efforts to secure peace and stability in Northern Ireland. Your even-handed support and wise counsel continues to be an invaluable resource to us in our search for lasting peace.

As you know, we were very close last December to bringing an end to the journey we first began with the signing of the Good Friday Agreement in April of 1998. The United States has been with us every step of the way. And I greatly appreciate the work of your administration, of your Special Envoy, Mitchell Reiss. Above all, I want to thank you for your personal interventions late last year to encourage the parties to face up to the challenges of peace and partnership, and to take the courageous steps required to secure agreement.

We've come a long way, President, over the last seven years, and we've achieved a great deal of progress in Northern Ireland. The Good Friday Agreement has positively transformed the political landscape. But we need to complete the work of achieving lasting peace and political partnership in Northern Ireland. We need to ensure that the agreement's vision of a new beginning to relationships is fully realized and secured for the benefit of this and future generations. That is what the people of Ireland, North and South, voted for in 1998, when they overwhelmingly endorsed the agreement. They did not vote, President, for an armed peace, neither did they vote for a criminal peace. They voted for a democratic peace. With your continued support and encouragement, Mr. President, we will deliver that outcome. 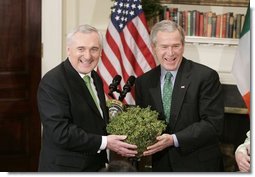 My government remains as fully committed today as we were in 1998 to making the Good Friday Agreement work. Recent events have damaged confidence, but they've also crystalized what must now be done to finalize the process and achieve stable partnership of government in Northern Ireland. Partnership politics requires all parties to play their part. But if trust and confidence is to be established, tangible evidence of commitment to a democratic peace is essential. The political conclusion envisaged by the agreement can only be realized when those who aspire to share in government have brought definitive closure to paramilitary capability and activity, including all forms of criminality.

Mr. President, in our continuing efforts to implement the agreement and achieve political progress in Northern Ireland, I know I can count on your continued support. We in Ireland deeply appreciate your generosity, your friendship, and the goodwill and encouragement of the United States.

I'm very pleased, therefore, to present you with this shamrock as a token of our esteem and heartfelt gratitude for all that you, Mr. President, and the United States have done for my country, and for all the people of Ireland. Thank you.

(The shamrock is presented.)

THE PRESIDENT: Taoiseach, thank you very much, and welcome back to the White House. It's -- Laura and I are delighted to continue the tradition of accepting the crystal bowl overflowing with shamrocks. It's a wonderful gift, symbolizing Ireland's world-renowned hospitality.

Today is a joyous celebration of the deep friendship between the Irish and the American peoples. The histories and blood lines of our two countries are deeply intertwined. And that is why, in cities and towns across our nation, millions of Americans celebrate this feast day of the Apostle of Ireland.

St. Patrick used the three leaves of the shamrock to illustrate the mystery of the Trinity. The shamrock has also come to represent the unity that people can achieve when they commit themselves to peace and freedom.

In America, we have a phrase for that -- it's called e pluribus unum, out of many, one. You'll find that on the great seal of the United States, which, by the way, was largely designed by Charles Thompson, a native of Derry. The hearts of the Irish burn for freedom and they brought that love for liberty to America. The Irish fought in our nation's war of independence, and over the past two centuries they devoted their blood and sweat to defending and building America. 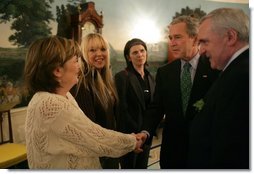 When terrorists struck our nation, the Irish were well-represented among the firefighters and police officers who sacrificed their lives to save others at the World Trade Center. In a great Irish tradition, Marines preparing to retake the city of Fallujah prepared for battle to the strains of Lt. Colonel Paul Sweeney's bagpipes echoing across the Iraqi plains.

The Irish have a way of turning adversity into opportunity. About a million came to our shores seeking refuge from the Great Potato Famine. Once they came, they built and they toiled and they produced. They constructed railroads and great cathedrals; they even helped build the U.S. Capitol. They added to our literature with a genius, with their words. And, of course, a few even entered politics. (Laughter.)

The Irish talent for statesmanship has been evident on both sides of the Atlantic. And today we're proud to welcome a friend of peace, and a friend of freedom, my good friend, Bertie Ahern.

Today, America and Ireland are united in many ways. The economies of our two countries are closely tied. We're working together to bring freedom and justice to Afghanistan and the Balkans and other countries that have now known it. We share a common commitment to the values preached by St. Patrick: liberty under God and the dignity of all human persons.

Taoiseach, we pay tribute to the role the Irish have played in defending and renewing the ideals that Americans cherish. May our friendship remain steadfast, and may the citizens of both our nations enjoy a happy and blessed St. Patrick's Day. Welcome back. (Applause.)