For Immediate Release
Office of the Press Secretary
March 17, 2005

THE PRESIDENT: Good morning. I'm pleased to announce my nomination of Congressman Rob Portman to be our next United States Trade Representative. For more than a decade, Rob Portman has been a superb representative of the 2nd District of Ohio. He's earned the trust of his constituents and the admiration of his colleagues. He brings a record of achievement to this new assignment. 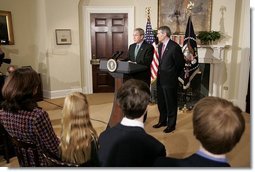 As a member of the House leadership, Rob has shown he can bring together people of differing views to get things done. He's been a tireless advocate for America's manufacturers and entrepreneurs. He's a former international trade lawyer who has shown a deep dedication to free and fair trade. And now he will bring that commitment to his new role as U.S. Trade Representative.

As an Ohioan, Rob knows firsthand that millions of American jobs depend on exports, including one in every five factory jobs. Our country is home to about 5 percent of the world's population, and that means 95 percent of our potential customers are abroad. To keep our economy growing and creating jobs, we need to continue opening foreign markets to American products. And Rob knows that America's farmers and workers can compete with anybody, anytime, anywhere in the world, so long as the rules are fair.

Under the outstanding leadership of Ambassador Bob Zoellick, the U.S. Trade Representative's office helped bring China and Taiwan into the World Trade Organization, and worked with Congress to secure Trade Promotion Authority. Bob and his team have completed free trade agreements with 12 nations on five continents, that will open a combined market of 124 million consumers for America's farmers and manufacturers and small

business owners. I appreciate his fine service, and I will continue to count on his wisdom and good judgment in his new post as Deputy Secretary of State.

When he is confirmed by the Senate, Rob Portman will build on Ambassador Zoellick's achievements. I've asked him to take on a bold agenda. We need to continue to open markets abroad by pursuing bilateral free trade agreements with partners around the world. We need to finish our work to establish a free trade area of the Americas, which will become the largest free trade zone in the world. We need to complete the Doha round negotiations within the World Trade Organization to reduce global barriers to trade. We must continue to vigorously enforce the trade laws on the books so that American businesses and workers are competing on a level playing field.

Rob is the right man to carry out this agenda. I've known him for many years. He is a good friend, a decent man, and a skilled negotiator. He understands that trade creates jobs, raises living standards, and lowers prices for families here at home. Rob also understands that as the world trades more freely, it becomes more free and prosperity abounds. 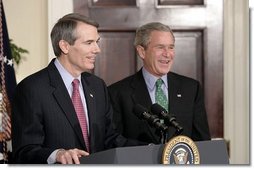 Rob Portman will be a fine leader for the dedicated men and women who work in the Office of the U.S. Trade Representative. I'm grateful he's agreed to serve. I'm grateful to his wife, Jane, and their three children, Jed, Will and Sally. I urge the Senate to promptly confirm this outstanding nominee as America's Trade Representative, and I look forward to welcoming Rob into my Cabinet. Congratulations.

MR. PORTMAN: Mr. President, thank you very much. I am very proud to stand at your side, and I am grateful for you giving me this opportunity to join your Cabinet and promote the bold international trade agenda you just described.

As you and I have discussed, open markets and better trade relations are key components to a more peaceful, a more stable and a more prosperous world. Through expanded trade, the roots of democracy and freedom are deepened. And here at home, trade policy opens markets to create jobs, a higher standard of living and greater economic growth.

For the past four years, Mr. President, you have been passionate about your vision for free and fair trade. And through your personal commitment to it and the tireless work of my good friend Bob Zoellick, former Trade Representative, and his superb team, you have made a lot of progress. I look forward to being able to try to build on that progress.

I would not be here today without the strong support of my family, who have joined us here. I'm fortunate to have a great partner, my wife Jane, who is both the love of my life and the best mother I can possibly imagine. And I couldn't be prouder of my three children, Jed, Will and Sally. They've all given this new responsibility their blessing.

Sally, who is a fourth grader, had to admit that she had never heard of the U.S. Trade Representative. (Laughter.) However, Mr. President, she said, "Dad, it sounds like a really neat job." (Laughter.) And it is, and a very important responsibility during historic times.

It's very tough to imagine leaving Congress and my many friends there, including Speaker Hastert. Dennis Hastert took me under his wing and gave me a seat at the leadership table, and I'll be forever grateful for that. However, if confirmed, I look forward to continuing to work very closely with my colleagues on both sides of the aisle and in both houses of Congress.

I want to thank my superb staff. They have been fantastic for me and for the 2nd District of Ohio. And finally, I owe so much to the constituents of Ohio's 2nd District. I've had the honor to represent them for almost 12 years now, and I'm very proud of what we've been able to accomplish. The people of Southern Ohio, and my hometown of Cincinnati, have given me opportunities to serve that I never dreamed possible. For their friendship and their support, Jane and I will be forever grateful.

Thank you again, Mr. President. I look forward to serving on your team.