For Immediate Release
Office of the Press Secretary
March 16, 2005 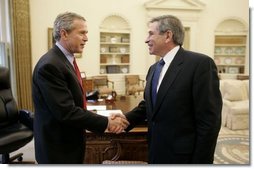 "Paul Wolfowitz is a proven leader and experienced diplomat, who will guide the World Bank effectively and honorably during a critical time in history - both for the Bank and the developing nations it supports. He has devoted his career to advancing the cause of freedom. He is a person of compassion who believes deeply that lifting people out of poverty is critical to achieving that goal. With his significant experience in government, including as a former Ambassador, and as an academic, Paul has a deep understanding of developmental issues and economic and political reform. He has the skills and the track record to build successfully on the leadership and substantial contributions of outgoing World Bank President Jim Wolfensohn," stated President Bush.

Secretary Wolfowitz is currently the 28th Deputy Secretary of Defense, managing the largest U.S. government agency with over 1.3 million uniformed personnel and nearly 700,000 civilian employees around the world. Prior to joining the Administration, he served as Dean and Professor of International Relations at the Paul H. Nitze School of Advanced International Studies of The Johns Hopkins University

Under President Reagan, he was the U.S. Ambassador to Indonesia, one of the largest developing countries in the world. Prior to his assignment overseas, Secretary Wolfowitz served as Assistant Secretary of State for East Asian and Pacific Affairs, where he was in charge of U.S. relations with more than twenty countries. He received his bachelor's degree from Cornell University and his Ph.D. from the University of Chicago. 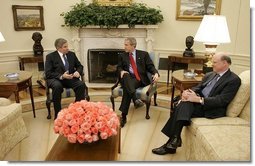