For Immediate Release
Office of the First Lady
March 14, 2005

MRS. BUSH: Thank you, Bob, very much for your kind introduction, and for your leadership at the Institute of Museum and Library Services. And I know I can speak for everyone here, certainly your board members, in thanking you for your incredible work that you've done for the educational and cultural mission of libraries and museums throughout America. 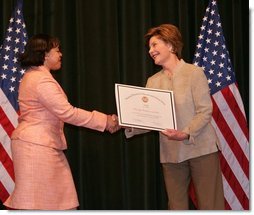 And congratulations to this year's award winners. Everyone here knows how important libraries are to me. Some of my happiest memories from my childhood were the times I spent reading books with my mother that we'd checked out of the Midland Public Library. As an only child, I learned a long time ago that as long as you enjoy reading, you'll always have a friend by your side. So like many of you, I loved reading so much I decided to make a career of it.

Museums take stories off the page and give people a three-dimensional image of our world. Museums feature everything from dinosaurs to Degas. Many children feel their heart flutter for the first time when they wander wide-eyed through a museum.

The libraries and museums we honor today fuel the imagination and the intellect. The Flint Public Library, the Mayaguez Children's Library, and the Medical Library of the University of Texas Health Science Center at San Antonio are using education and outreach to improve the lives of people in their communities. The Chicago Botanic Garden, the Western Folklife Center, and the Zoological Society of San Diego educate their visitors about how the world works and how it has evolved over time.

The Flint Public Library serves a diverse community with programs designed to help children explore their culture and find their voice. One of the young men who found his voice in Flint is Martres Brown. Martres has been visiting the library almost every week since he was five. Now, at age 18, he chaperones his younger brother during visits to the library, and he tutors children so they can enjoy reading as much as he does. Martres is following the path of legendary speakers like Malcolm X by polishing his oratory skills. He's already renowned as a student orator in Flint, and in just a few minutes, he'll introduce his talents to Washington. Thanks so much, Martres.

In Mayaguez, Puerto Rico, the local library is a stepping stone to college and a better life. More than half the town's population lives below the poverty line, and nearly half of teenagers drop out of high school. The bilingual Mayaguez Children's Library has a staff of just five people, but hundreds of community volunteers and supporters help students become literate in both language and technology. Jonathan Sanchez came to the library through a mentoring program. He developed a love of reading and computers, and he found a second family in the close-knit staff and volunteers at the library. As Jonathan gets ready to graduate from high school this spring, he has a 3.8 grade point average. In the fall, he'll enroll in the University of Puerto Rico. Jonathan, you want to stand? (Applause.)

At the Medical Library of the University of Texas Health Science Center at San Antonio, the staff sum up their philosophy as "each one, teach one." It guides their efforts to improve the health of medically underserved people in the Lower Rio Grande Valley. Flor Zuviri, a high school student, contributes to that work. For the past four years, Flor has worked with the Medical Library to prepare bilingual presentations on healthy living and disease prevention for children and adults. This is just the beginning of her medical career. Flor is going to college in the fall and plans to become a pediatrician. Flor, where are you? There you are. Thank you. (Applause.)

The Chicago Botanic Garden offers plenty of green space to city and suburban residents. The Garden hosts programs that let people of every age get their hands dirty -- literally -- as they learn how plants grow. Brianna Sampson's interest in gardening was passed down from her grandmother. She's been active in the Chicago Botanic Garden's "Green Youth Farm," where she learns about horticulture, agriculture and business. Brianna's love of science is leading her toward pharmacy school once she graduates from high school in May. Brianna -- where is she? There she is, on the front row. (Applause.)

As a child of Texas, I have a special place in my heart for the American west. The mountains, the prairies and deserts have captivated Americans' imaginations for centuries. Now the Western Folklife Center in Elko, Nevada, is putting the story of the west on display. Exhibits and workshops show how the west developed over decades, while fieldwork and archives preserve the legacy of western life. The National Cowboy Poetry Gathering, held every year, puts a spotlight on poetry inspired by the west. Linda Hussa draws on her experience as a rancher in creating her works. She's presented her poetry at the gathering in Elko, which she says is "akin to performing at Carnegie Hall." Today, she'll recite one of her poems for us.

Every year, more than five million visitors view and learn about the animals at the San Diego Zoo, one of the most famous zoos in the world. The zoo also brings animals into the community -- under close supervision -- to educate people and to participate in therapeutic exercises. Bonnie Beckman has been wild about the zoo since she was four years old. She learned about animals and their habitat through the Zoo School, which offers activities for children ages four to eleven. Now she volunteers her time to make presentations about endangered species and conservation. As much as people enjoy the zoo, Bonnie knows what really makes a zoo great. She says one of the best things about the San Diego zoo is that the animals seem happier than at any other zoo she'd ever seen. They really thrived. Bonnie. (Applause.)

The young people who are here today, and countless others, are enriched by the libraries and the museums we honor. Children and adults are drawn to each of these institutions because, quite simply, they're fun.

Thank you all, each one of you, for opening eyes and minds to the wonders of reading and exploration. And congratulations on your success. Thank you all so much. Congratulations. (Applause.)