For Immediate Release
Office of the Press Secretary
March 9, 2005

PRESIDENT BUSH: We'll have brief opening statements. The President and I will take two questions per side.

PRESIDENT BĂSESCU: Thank you very much.

PRESIDENT BUSH: I am impressed by your leadership. I am grateful for your friendship. Romania has been a steadfast ally of freedom. And, Mr. President, I can't thank you enough for coming to discuss a wide range of subjects. 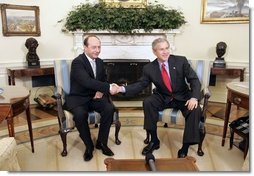 I told the President I'm most impressed by his campaign to rid the government of corruption in Romania -- a steadfast, strong commitment. He believes in transparency and rule of law, and that is very important for American companies looking for a place to invest to hear from the leader of the country. But the thing about this President, he's more than words -- he's action.

And so, Mr. President, I welcome you to the Oval Office, I thank you for your friendship and I'm proud to call you friend.

PRESIDENT BĂSESCU: Thank you very much, Mr. President. I'm happy being here in my first visit over the ocean from when I was elected as President of Romania. I'm happy to discuss with our ally, the President Bush, with the United States, I am happy to pass our message regarding democracy, regarding freedom, regarding development of our strategic partnership, regarding the problems which the Black Sea we have in this moment, and regarding the solutions which we can find together in order to make a peaceful and secure area on the Black Sea.

At same time, I was happy to discuss with Mr. President the future evolutions of our access on the United States. Romania considers that we can be included on the program of allowing Romanians to circulate without a visa on the United States. And I thank you very much, to President Bush, for the open approach regarding this subject.

Q Mr. President, how credible do you think U.S. intelligence is about Iran's nuclear program? Do you think it's solid enough to make judgments about whether Iran is trying to develop nuclear weapons?

In my trip to Europe, I discovered common ground with a lot of European nations, which believe and are worried about Iranian intention. And one reason there needs to be worry about Iran is that this is a non-transparent society, there's no openness. And so I think it's very wise for the free world to be concerned about Iranian weapons and it's very easy -- the Iranian's desire to develop a weapon, and it's very easy for them to solve the problem, and that is to not only give assurances about any nuclear weapons program, but to allow full IAEA inspection processes in a transparent way. 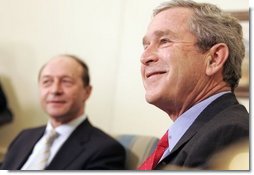 Anybody from the Romanian press? Mr. President, you call on somebody.

Q Yes, please; one question. As Romania becomes part and a springboard for democracy and freedom in the area of the Black Sea, how will this project affect the well being of the Romanian people?

PRESIDENT BUSH: Well, I think one thing -- I'll never forget my trip to Bucharest -- it was the rainbow speech. (Laughter.) It was a mystical experience for me. It was one of the most amazing moments of my presidency, to be speaking in the square, the very square where Ceausescu gave his last speech. And the rainbow that I saw in the midst of the rainstorm ended right behind the balcony from my point of view. It's a clear signal that, as far as I was concerned, that freedom is powerful and --

PRESIDENT BĂSESCU: It meant the signal of destiny, Mr. President.

PRESIDENT BUSH: Well, we'll see. But my point to you is, is that I was there to assure the Romanian people that we were an ally and that the Romanian people need not worry about their security, that the United States, through NATO and through bilateral relations, was committed to the security of our friend.

So the people of Romania need to know that the days are passed when -- you know, when outside forces could threaten them without help. And that's important for a society to be -- to be -- to recognize there are strong enough allies to allow the society to develop, to have gone from a day of dictatorial regime to one of a free society. And that's not an easy transition, but it certainly makes the transition easier, knowing full well that there is security available through bilateral relations, as well as through NATO.

Q Yes, Mr. President, thank you. You have made daily calls on Syria to fully withdraw from Lebanon and warn that they are being isolated. But what are the consequences if they don't pull out? Do they face international sanctions?

PRESIDENT BUSH: Well, we are working with our friends and allies on this very important issue. I'd like to reiterate my call, and that is, in order for those elections to be free in Lebanon, there must be -- the Syrians must remove their troops, as well as their intelligence services. One of the things a lot of people don't understand is that Syrian influence is heavy-handed through the involvement of intelligence services throughout the government. And they must remove both in order for the election to be free. 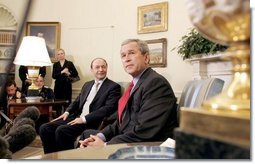 And we're working with friends and allies about steps forward, what to do. Right now, President Assad has said he's removing to the Bekaa Valley. That is a half measure. It is a measure, but it's a half measure. And 1559 is very clear. We worked with France and the Security Council to pass 1559, which said, complete removal, not half measures, but total removal. And so we'll continue to work with our allies to make our -- make our demands known to the world.

The world is speaking now. That's what the President Assad must understand. It's not just the western world that speaks. I was most impressed by Crown Prince Abdallah's statement, that said to the Syrian President: You must adhere to 1559.

Q President Bush, the Romanian President keeps on saying that he favors a special partnership between Washington, London, and Bucharest. Would you confirm that role of special ally in Southeastern Europe of Romania?

PRESIDENT BUSH: Well, I view the -- I view Romania as a special ally because Romania shares the same values that we share: human rights, human dignity, rule of law, transparency in government, anti-corruption. And this President, I think, is a special leader because he has made a commitment to those values. We want to work with our friends in the region to bring stability and peace. And I value his advice and judgment. I mean, he's no better person to listen to on issues such as Moldova than the neighbor of Moldova.

And so he came to the Oval Office. I asked him what I can do to help, what can we do to move democracy forward, because the President understands that a democratic neighbor is one that will be a peaceful neighbor.

And I want to thank you all for coming.