For Immediate Release
Office of the First Lady
March 9, 2005

MRS. BUSH: Thank you very much, Michelle. It's intimidating to follow an award-winning debater. (Laughter.) I only wish we'd met you last year before the presidential debates. (Laughter.)

I'm so happy to be joined with Secretary Margaret Spellings today, my good friend and our very excellent Secretary of Education. And Mary Perdue, thank you for joining us today, and Dianne Isakson, thank you for coming. Dr. Carol Winkler, thank you very much for your great work as Co-Executive Director of the National Debate Project. And Dr. Beverly Hall, thank you for joining us, the Superintendent of Atlanta Schools. And Mr. Alexander, Principal, thank you very much for your great work here at Benjamin S. Carson School. And Roxanne, it's great to be with you again. Roxanne is the President of the Boys and Girls Club of America, and she's joined me a few times on the road as we've visited various projects that the Boys and Girls Club have around our country. 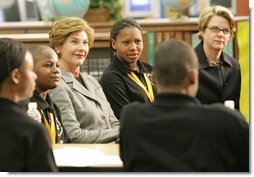 But I'm really happy to be in Atlanta today to talk about a new nationwide effort called Helping America's Youth. The President asked me to lead this effort, and I eagerly accepted. For years, I've worked as a teacher and a librarian, or I've visited so many schools in the last few years and after-school programs around our country that are designed to help children who might be at greater risk of getting in trouble. These programs are changing young people's lives for the better, and children and parents need to know where they can go to get help.

Some trends among youth are heading in the right direction, but others are not. Risky behaviors, including drug, alcohol and tobacco use, violence and early sexual activity are still among the top causes of disease and early death among young people. More children are growing up without an involved and committed father in their lives. And studies show that an overwhelming number of violent criminals in the United States are males who grew up without a father.

Helping America's Youth will benefit children and teenagers by encouraging action in three key areas: family, school and community. These initiatives highlight the importance in every child's life of a caring adult, whether that's a parent, a grandparent, a teacher, a coach, a pastor or a mentor. In addition to emphasizing community involvement, Helping America's Youth is an umbrella initiative for several federal programs that already exist or that the President has proposed for his 2006 budget, programs like Striving Readers, which Secretary Spellings spoke about; programs like the Responsible Fatherhood initiative and the Healthy Marriage initiative, to foster better parenting; and a new anti-gang initiative to keep young people from being involved in gang violence.

This fall, we'll convene a White House summit on Helping America's Youth. Researchers, policy experts, community leaders, parents will discuss ways we can help children avoid risky behaviors and build their lives so that they become responsible, healthy adults. Researchers will identify the causes of problems and help suggest the best practices to overcome them. Community groups, like this one, are also faith-based groups, which will tell us what's working in the field. The conference will introduce a new assessment tool that communities like Atlanta can use to identify the challenges they face and the services they already have, and then see where the gaps exist. Local leaders can then build off existing government programs, as well as volunteer faith-based and community programs, to create seamless efforts to help the youth in their communities. 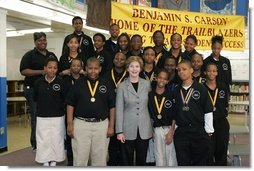 Since the President announced this new initiative at his State of the Union address, I've visited several cities in America to see innovative programs like the ones I just saw today.

In Baltimore, researchers have found that children need to be taught how to behave in school; it doesn't just come naturally. So 1st graders are learning how to be good students through teamwork. Researchers have found that students who participate in the Good Behavior Game in the 1st grade exhibit dramatically less aggressive behavior and have more focus in the classroom more than a decade later.

In Detroit, more than 650 coaches volunteer their time to mentor thousands of young people across the city. Think Detroit teaches children life lessons through sports.

And in northeast Philadelphia, I visited a Boys and Girls Club that has a Passport to Manhood program. Statistics show that boys are having a particularly difficult time growing up. They're more likely to fall behind girls in school, and they're more likely on average to join gangs, to drop out of school, to commit crimes and to wind up in jail. Fewer boys go to college now in the United States than girls, and fewer boys and young men graduate with college or with a master's degree than girls. In this Passport to Manhood class that I visited, boys 8 to 16 meet with a group leader to talk about the characteristics that men should have, and the character traits that they want to develop in their own lives. These young men strive for an ideal of manhood that respects life and women, and rejects violence.

Today, I had a chance to see the Computer Assisted Debate project at work. CAD was created through a partnership of private and public sector organizations. The Atlanta Housing Authority wanted to help children living in their communities do well in school and have a safe, structured environment after school. Local universities in the National Debate Project, Georgia State, Emory and Clark Atlanta, contributed their expertise to forming debate leagues. The Boys and Girls Club of Metro Atlanta provided the resources to build the computer lab at Carson and instituted the curriculum from their "Power Hour" after-school program. The Atlanta Public Schools are providing classroom space and transportation for students. And TechBridge, a non-profit group, designed the interactive website that helped students do online research, and gives parents information about their children's performance.

How is debate helping children in Atlanta? Michelle Parks told us that debating helped her find her voice. Anyone who has raised a teenager know that they are searching for ways to express themselves. Unfortunately, some teens turn to anger or violence as a means of expression. Debate is a healthier option, safer for children and for their communities. Students in the CAD program learn what it's like to be on a team, a lesson much better learned in the classroom than in a gang. They learn to see both sides of an issue, which helps them diffuse potentially dangerous situations. Debaters learn how to identify a good argument and reject a bad one, so they're better equipped to deal with the hazards of negative peer pressure.

CAD encourages students to value their own opinions, which leads to increased self-awareness and higher self-esteem. Marvin Nesbitt of the Atlanta Housing Authority was inspired to start CAD when he saw a report on TV about a debate program in Baltimore. One of the students in that program said, "It just feels good. It makes you feel really good about yourself." Communication, knowledge and healthy competition are great ways to make a child feel good about herself.

The students in the Computer Assisted Debate project have immediate goals, like performing well in competition and winning medals, but they also have long-term goals. Most of the students in CAD talk about wanting to go to college. The college students and the professors who teach debating skills open students' eyes to the world of higher education. I love the story I heard about Robin, who was one of the debaters I watched this morning. For Halloween, the students were told they could dress up and they could give a speech about a person they admire. Robin came to school in her regular clothes. When it was her turn to speak, she said she had dressed up as herself -- a future Harvard graduate. (Applause.)

The Computer Assisted Debate program gives children in Atlanta the tools to improve their academic performance and build a strong, independent character so they can steer clear of the dangers present in many communities. Helping America's Youth depends on innovative programs like this, and it depends on the individual commitment of every American. President Bush has called on all Americans to engage in 4,000 hours of community service throughout their lives. Studies show that 15 million children in America are searching for a role model or a mentor. Surely there are 15 million caring adults who can help fill that need. People who need help getting started can go to USA Freedom Corps website -- USAFreedomCorps.gov -- which has the largest online clearinghouse of volunteer opportunities ever created.

The time between childhood and adulthood is all too short, as George and I can attest, and every moment in a child's life is precious. After my visit to Think Detroit, the coaching project that I told you about, a newspaper reporter asked a little boy in the crowd what he thought of my visit. And I was moved when I read that the little boy simply said, "I wish she could stay here."

Children want us in their lives, and they need us in their lives. And as I've learned from the remarkable people around the roundtable today, and others that I've met around our country, each of us has the power to make the difference in the life of a child.

Thank you all very much. Thank you for your efforts to help America's youth. (Applause.)