For Immediate Release
Office of the Press Secretary
March 8, 2005

PRESIDENT BUSH: Listen, I want to thank former Presidents Clinton and Bush for representing our country and showing the best heart of America when it came to helping those who suffered from the tsunami natural disaster. The Presidents presented me with a report. This report basically says America cares deeply about suffering people around the world. I can't think of two better ambassadors to carry our message of compassion. 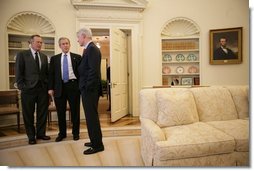 They reported that progress is being made. Nearly a billion dollars of private sector money has gone to help. Our government requested $950 million additional dollars to help. And I want to thank both leaders for really showing the world how much we care. I think the world is beginning to see a different impression of America. One of the things the Presidents reported to me is there was an outpouring of great kindness everywhere they went. I'm heartened that the good folks of Indonesia, for example, see a different America now when they think about our country. They see a country which of course will defend our security, but a country which also cares deeply about suffering people, regardless of their religion, that when we find a Muslim child suffering we weep just as equally as when we find another child that suffers.

And so I want to thank you all for doing the best. I'd like to ask both Presidents to maybe say a comment. They'd be willing to take questions after this in the Roosevelt Room.

FORMER PRESIDENT BUSH: My comment is President Clinton was a joy to work with. I was pleased that the President asked me to be a part of this. And the only other thing I'd say is that when you see the children out there, you count your own blessings because the devastation was real and the generosity of the American people will go a long way to making things better in all the four countries we visited.

FORMER PRESIDENT CLINTON: I'd like to thank the President for giving me a chance to work with former President Bush. We had a very good experience, I think, on this trip before and after raising funds. We're going down to Florida to raise some more money tomorrow.

The report basically says that these people have done an unbelievable job dealing with their losses and cleaning up, but that there's a lot of work yet to be done, particularly in the hardest hit countries, to restore them to normal life, and that we want America and the world to be a part of this all the way through to the end.

They are very grateful for what the American military did, for what USAID did, for what the hundreds of non-governmental organizations have done. But there's a lot of work left to be done, and we want to see it through to the end.

PRESIDENT BUSH: By the way -- by the way -- let me -- one other point. President Clinton and President Bush are going to play golf tomorrow to raise money for the tsunami victims -- which goes to show how sick he is. (Laughter.) 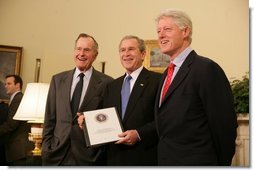 FORMER PRESIDENT CLINTON: We are. (Laughter.)