For Immediate Release
Office of the First Lady
March 8, 2005

Thank you, Madame Secretary. America's new Secretary of State is an inspiration to women in America and to women around the world. (Applause.) No doubt many young girls are dreaming of becoming Secretary of State because of the example they see in Dr. Rice. Thanks also to Under Secretary Paula Dobriansky, for your leadership on international women's issues at the State Department. And thank you Barbara Barrett, Chair of the Public Diplomacy Commission, for your work on behalf of women around the world. (Applause.) 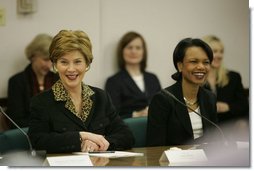 I am proud that President Bush surrounds himself with smart, strong women. (Laughter and applause.)

We are celebrating International Women's Day with women and men from diverse backgrounds who will discuss the challenges democracy faces in the world and the best way to advance the cause of freedom and build tolerant societies. Elections are a defining characteristic of democracy, but democracies include other characteristics as well.

Democratic societies welcome the free exchange of ideas and information. They encourage vigorous debate. They foster education and exploration, and they allow people to grow intellectually and professionally without limits. American women stand in solidarity with women around the world.

We were horrified by the cruel and inhumane treatment of Afghan women under the Taliban regime. Keeping girls out of school and out of work was meant to relegate women to a state of perpetual inferiority. That's unacceptable in any society and it's just not very smart to keep one half of society locked up, forbidden to expand their minds or contribute to the life of their nation. By telling people their ideas and their labor have no value; repressive societies limit their ability to create great thinkers, scientists, educators and leaders who can improve the lives of all people.

America has become a world leader because of our commitment to freedom, but our own history isn't perfect. For decades, women fought for the right to vote and to hold office. Yet even while they were denied access to the ballot box, women made their voices heard on issues like slavery, workers' rights, the protection of children, the intellectual life of their country, and good government. The perseverance of early women leaders was realized when American women gained the right to vote early in the last century.

Today, we recognize the familiar appeal of freedom, equality and tolerance around the world. President Bush has made the advance of women's human rights a global policy priority. We join people around the world in protesting the house arrest of Aung San Suu Kyi, who is a leader in the struggle for freedom in Burma. In China and Cuba, women still can not freely express their political or religious beliefs. The degrading practice of human trafficking continues to enslave women around the world. At the U.N. Commission on the Status of Women, which is meeting now in New York, the United States is advancing a resolution to bring much-needed attention to the issue of human trafficking. 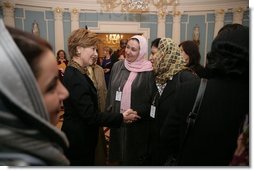 America supports societies around the world that are moving toward democracy and greater political participation for women. The people of Afghanistan have elected their leader and no longer live under the tyranny of the Taliban. Iraqis recently participated in historic free elections. Elections in the Palestinian territories give hope to the possibility that votes will replace terror as the way to seek political power in that region.

In Afghanistan, 8 million people voted; 40 percent of that number were women. Religious and ethnic differences were obscured as voters made their choices across cultural boundaries. People endured hardship and hazard to cast their votes. Men and women trekked miles through the countryside to find polling stations, still bearing the scars of war. Forces opposed to the elections issued threats to try to keep people from the polls, but their threats were ignored by women and men who decided that living in freedom was worth the risk.

The vote in Afghanistan was especially sweet for women who had had the chance to finally banish their Taliban oppressors to the recesses of memory. The new Afghan constitution is one of the most progressive documents on women's rights in the Muslim world. Three women now serve as government ministers in Afghanistan and other women represented their fellow citizens in the Loya Jirga. Also, for the first time ever, a woman was appointed a provincial governor. A vibrant ministry of women's affairs is concentrating on issues for women, including vocational training, health care and civic education.

Women are active in the institutions of civil society and at provincial women centers across Afghanistan, women are learning about their rights and their new opportunities. I'm especially encouraged by the fact that women are heading back to the classrooms as teachers. They are now responsible for educating their students -- including more than 2 million girls -- about the rights and the responsibilities of citizenship and democratic government. The United States is lending support to new teachers through the Women's Teachers Training Institute, established in Kabul. The institute trains women using a master teacher model, so that women who attend the institute can return home and pass on the skills they've gained. The educational benefits will help women make up for years spent out of the classroom.

In January, Iraqi citizens, like those in Afghanistan, overcame intimidation and hardship to cast their votes. An American television network broadcast footage of a 94-year-old woman being carried to the polls by her son. A recent college graduate from Baghdad spoke of the debates about voting in her household. The young woman has four sisters and their father wanted them to stay home because it was too dangerous, but all four sisters insisted on going to the polls and they took their father with them. (Laughter.)

A coalition of women's activists supported by the International Republican Institute, which is a nonpartisan organization dedicated to supporting freedom and good government around the world, suffered a terrible loss in the days before the Iraqi election. One of their leaders was murdered by terrorists because she had been too outspoken about the importance of the elections. Instead of giving in, her fellow activists held a press conference, appearing openly before the media to launch a public awareness campaign promoting women's participation in the election.

Acts of courage like these give the world great confidence that the women of Iraq accept the challenges of building a free, just and tolerant society that respects the rights of all people. Iraqi men and women are scheduled to vote twice more this year. In October, they're expected to vote in a referendum on a new constitution and in December they'll elect the first government under the constitution which will be drafted by Iraq's recently elected assembly. Women will influence the drafting because they hold nearly one-third of the seats in the assembly. We're hopeful that the document they design will firmly establish the principles of representative and transparent government, democracy and universal human rights for all future generations of Iraqis.

Women and men in the Palestinian territories yearn for a life of peace and have started their own democratic journey; 66 percent of registered voters, nearly half of whom were women, cast a vote for president in Gaza and the West Bank. Mai Shaheen is a 25-year-old woman who manages a U.S. government grant for a Palestinian NGO. She saw the election as a golden opportunity for women to participate in political life. Mai attended a two-day training program funded by the USAID, then used what she learned to compile a training manual for Palestinian election workers. She recruited 25 volunteers -- including 21 women -- who went to polling stations in Gaza to observe and report on the voting process. Some of the women stayed late into the night to finish ballot-counting. Mai said, "We stayed through the whole process to prove to men that we are equal partners in society."

Mai is hopeful that elections will make her region more stable. History shows us that democratic nations are more likely to live in peace, and the new leadership of President Abbas has offered encouraging signs that a democratically elected leadership in the Palestinian territories will take a significant step toward peace.

President Bush and Secretary Rice will continue to work with Palestinian and Israeli leaders to make a lasting peace possible. (Applause.)

The elections in Afghanistan and Iraq and the Palestinian Territories will have far-reaching consequences. To date, ink-stained fingers raised in triumph are a clear symbol of freedom. Suddenly, women and men in other parts of the Middle East are asking questions they once wouldn't have dared to ask: When can we choose our leaders? When can we be free? In the last few weeks, people on the streets of Beirut have raised their voices, asking for democracy and an end to occupation. People in the Middle East and commentators around the world are beginning to wonder whether recent elections may mark a turning point as significant as the fall of the Berlin Wall.

Our work to encourage democracy is part of a larger effort to support women across the broader Middle East and North Africa, from girls' literacy programs in Yemen to micro-credit initiatives for women entrepreneurs in Jordan to legal workshops in Bahrain. The State Department organized the Middle Eastern Partnership Initiative to help create a women's network in the region so that women can share and learn from each other, as much as you're doing today. Many of you are actively involved in these programs in your region and I'm proud of your leadership. All people who love freedom hope that we are witnessing the start of a new era of expanding liberty and growing opportunity for women worldwide.

On behalf of all Americans, I want to thank the women and the men who took courageous actions in speaking their minds and casting their votes. Your efforts are testament to the enduring appeal of democracy. And many of our other guests, from Asia, the broader Middle East and North Africa, have their own stories of democracy and freedom to tell. The women and men of the United States military and our coalition partners, as well as Iraqi and Afghan security forces, also deserve our appreciation for risking their lives to make elections possible.

We all have an obligation to speak for women who are denied their rights to learn, to vote or to live in freedom. We may come from different backgrounds, but advancing human rights is the responsibility of all humanity, a commitment shared by people of goodwill on every continent. Thank you for embracing freedom and advancing the rights of women worldwide. I look forward to hearing your experiences and to learning how we can support other men and women who want to follow your example.