For Immediate Release
Office of the Press Secretary
March 3, 2005

THE PRESIDENT: I want to thank Director Goss for his hospitality. It was such a pleasure to come out and see hundreds of folks who work here at the Central Intelligence Agency. I came for a couple of reasons. One, I wanted to assure the people here that their contribution was incredibly vital to the security of the United States, and that, together, we've achieved a lot in securing this country. There's a lot of really incredibly bright, capable, hard-working, dedicated Americans who work in this building. So my first mission was to thank them. 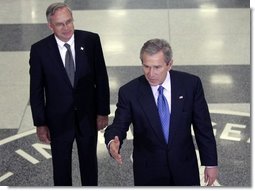 And the second thing was to explain that the reforms that we'll be implementing through the good graces of Ambassador Negroponte, if confirmed by the Senate, will actually help the CIA do its job better. And I got a great reception. I want to thank you, again, Director, for your hospitality. We're making progress in the war on terror. The world is changing. And this country of ours will continue to do our duty, which is to find terrorists, bring them to justice through good intelligence and hard work and some brave souls, and at the same time work to spread freedom and liberty around the world.

Q Mr. President, your CIA Director, Mr. Goss, said yesterday that he has to wear five hats now and that he was concerned there were some ambiguities in the new arrangement about his relationship with Mr. Negroponte and Secretary Rumsfeld. Do you feel there are such ambiguities, and will you move to -- if there are, will you move to clear them up? And will this prevent -- present a problem for the flow of intelligence in this time when it's a transition period?

THE PRESIDENT: That's an excellent question. Porter and I have discussed this, of course, because I don't want there to be any interruption of intelligence coming to the White House, and there won't be. As a matter of fact, Porter Goss comes every morning with the CIA briefer to deliver the briefing. And that, of course, will go on. And it's -- secondly, we don't even have Ambassador Negroponte confirmed yet. In other words, it's hard to implement reforms without somebody to be the reformer. And so the process is ongoing. Obviously, when his name gets up to the Senate we hope there's a speedy confirmation.

But one of the purposes of the whole process, Tom, is to make sure that information flows are smooth and that efforts are coordinated. The CIA is the Central Intelligence Agency, it's the center of the intelligence community, but there's a lot of other intelligence-gathering operations around government. And the job of Ambassador Negroponte is to be -- to take the information and make sure it is coordinated in its distribution to not only the White House, but to key players in my administration. And so I'm confident that the process will work.

Obviously, one of the reasons I came here is because I know there's some uncertainty about what this reform means to the people of the CIA, and I wanted to assure them that the reforms will strengthen their efforts and make it easier for them to do their job, not harder. I'm glad I came out. 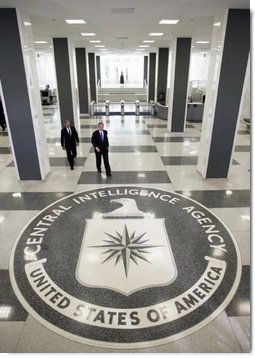 Q Mr. President, on Social Security reform, what's your judgment about where this process stands right now, with polls showing the public skeptical; some Republicans, like Senator Grassley, are seeming to back away from your proposal; and Democrats wanting to declare it dead.

THE PRESIDENT: I would say this: I am -- know we're at the early stages of the process. I've only had nine trips around the country so far -- or nine states on my trips. I've got a lot more work to do. Now, I do believe we're making progress on the first stage of getting anything complicated and difficult done in Washington, and that is to explain the problem. And the surveys I have seen, at least, say that the American people understand we have a problem. And I'm going to continue going out to explain that to people, the nature of the problem. And the problem is, in 2018, the system starts losing money. In 2027, it's $200 billion in the hole and it gets bigger every year thereafter.

In other words, we can't pay for the promises we've made -- that's the problem.

And my second phase of this explanation to the American people is to say to seniors who have retired or people near retirement, you don't have anything to worry about, you're going to get your check. I've got a lot of work to do on that, and I understand that. But we're making progress. People are beginning to say, we have a problem. The next phase, when people say we have a problem, is going to be, what are you going to do about it? And I'm willing to put out some ideas about what to do about it. In my judgment, ultimately, I think politicians need to be worried about not being a part of the solution.

And so I'm looking forward to continue to make the case. As you know, Terry -- you have followed me a lot -- I like to get out amongst the people. I get energized. I get energized by being with people, and I get energized when I think about taking on big problems, because that's why we got elected. The American people expect people to come together to solve problems. And I'm looking forward to listening to Republicans and Democrats. I said, put your ideas out there; there will be no political third rail when it comes to Social Security. Now is the time for good people of goodwill to come together and get the problem fixed. 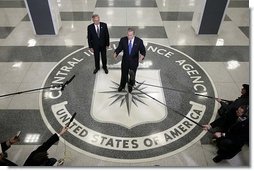 Q Fed Chairman Alan Greenspan said today that a consumption tax, maybe even a national sales tax, might spur greater economic growth. What do you think about that?

THE PRESIDENT: I think that I'm going to wait until the tax commission I put together, the reform commission, headed by former Senator John Breaux, Democrat of Louisiana, former Senator Connie Mack, Republican of Florida, comes forward with some ideas. I told the American people I want to work to simplify the tax code and make it easier to understand, so people are spending less time filing paper, and I believe a simplified tax code will spur entrepreneurial activity. And so I'm looking forward to what the commission has to say.

Q You mentioned Osama bin Laden earlier this morning and you said several times that there's progress being made on the war on terrorism. But more than three years after September 11th, you still don't know where he is. How would you assess the adequacy of the intelligence you're getting on bin Laden, and do you expect that he's going to be found anytime soon, even within your second term?

THE PRESIDENT: If al Qaeda was structured like corporate America, you'd have a chairman of the board still in office, but many of the key operators would no longer be around -- in other words, the executive vice presidents, the operating officers, the people responsible for certain aspects of the organization have been brought to justice. A lot of them have been. And we are -- spend every day gathering information to locate Osama bin Laden and Zawahiri, obviously, people like Zarqawi. We're not resting on our laurels. We've had great successes. And -- but that doesn't mean that we should stop.

And one of the reasons I came out here was to remind people that we've had great successes. I appreciate their successes -- Khalid Shaykh Muhammad, Ramzi Binalshibh. I can go down the list. But there's more work to be done. And it's a matter of time. As far as I'm concerned and as far as the CIA is concerned, it's a matter of time before we bring these people to justice. And I can't thank the intelligence gatherers, the analysts and the operators -- I can't thank them enough for the sacrifices they're making.

Q Mr. President, on Iran, you spoke to Condoleezza Rice yesterday, we were told. What can you tell us about the pros and cons that you're weighing now as you reach a decision on going forward with the EU?

THE PRESIDENT: Yes, let me just tell you how I see the state of action here. First, I am most appreciative that our friends in Europe agreed with the United States that Iran should not have a nuclear weapon, period. No ands, ifs or buts. And I thought that was a very important statement from the leaders I met with. And by the way, Mr. Putin feels the same way. And to me that is a very -- a positive start for achieving our common objective. First, you got to agree to the goal. And the goal is no weapon.

Secondly, I have told our European friends who are handling the negotiations on behalf of the rest of the world that we want to help make sure the process goes forward. And we're looking at ways to help move the process forward.

The guilty party is Iran. They're the ones who are not living up to international accords. They're the people that the whole world is saying, don't develop a weapon. And so we are working with our friends to make sure not only the world hears that, but that the negotiating strategy achieves the objective of pointing out where guilt needs to be, as well as achieving the objective of no nuclear weapon. And I felt good about our visits.

I did visit with Condi yesterday. I'm about to go visit with her again in the Oval Office to discuss not only this issue, but other key issues including Lebanon, where the message is loud and clear from the United States and France -- and many other nations -- that Syria must withdraw not only her troops, but her secret service forces out of Lebanon now. And I look forward to talking to Condi about getting an amplification on her visit with our allies overseas. I look forward to not only hear their words, I want to hear about their body language. I want to hear about their enthusiasm for the project. I think I'm going to find it was quite high because the people now understand that if you believe in democracy, why not let the democracy in Lebanon flourish and grow? And the United States of America strongly supports democracy all around the world, including Lebanon. And it cannot flourish so long as Syrian troops are there. It's time for Syria to get out.

Listen, thank you all. I appreciate seeing you.