For Immediate Release
Office of the Press Secretary
March 3, 2005

THE PRESIDENT: I'm pleased to be here at the Department of Homeland Security with our new Secretary, Michael Chertoff. (Applause.) And I'm honored to share this moment with Meryl and their children.

This is the third time -- not the first or second, but the third time that I've asked Mike to serve our nation. I keep asking him back for a reason: He is a talented public servant, with an outstanding record of achievement and a deep commitment to the cause of justice. As a federal court of appeals judge, assistant attorney general, U.S. attorney and federal prosecutor, Mike has worked tirelessly to make our people safer and our nation more secure. And now he will carry on that vital work as the Secretary of Homeland Security.

I appreciate Michael's in-laws for being here. Always a good thing, Mike -- (laughter) -- to listen to your mother-in-law. (Laughter.)

Since September the 11th, 2001, we have taken unprecedented steps to protect the American people. We have assembled a strong coalition of nations to secure our respective countries. We have closed down terrorists, networks, and chased down their leaders in mountains and deserts around the world. We've removed two dangerous regimes that harbored terrorists and threatened the peace; we convinced a third to voluntary abandon its nuclear and chemical weapons programs. We have broken up the world's most dangerous nuclear trading network, and busted up terrorist cells around the globe.

We have been relentless, and we will continue to be relentless in our mission to secure the people of this country. From Florida to California to Massachusetts we have arrested and prosecuted terrorist operatives and their supporters. By our actions, we are sending the world a clear message that terrorists will not be permitted sanctuary or safe haven, or the tools of mass murder. (Applause.)

As we have taken the battle to the enemy, we have also taken extraordinary measures to better protect the homeland. We've carried out the largest reorganization of government in a half century, merging 180,000 people from 22 government organizations into a single department with a single mission: protecting America from attack. The success of the men and women of the Department of Homeland Security do not always make the headlines. But I understand what you've done, and I appreciate your hard work. By your tireless efforts behind the scenes, you have helped protect our citizens and secure our nation. And this country is grateful for all you do. (Applause.)

In the last two years, this department has implemented a vigorous new strategy to guard our borders, posting Homeland Security personnel at foreign ports; strengthening airport and seaport security; and instituting better visa screening for those entering the United States. We've taken important steps to protect our nation's critical infrastructure -- our bridges and tunnels and nuclear power plants and water treatment facilities and the cyber networks that keep our government and our economy running.

This department has also taken action to strengthen the hand of our partners in state and local law enforcement. Local police and other authorities are those most likely to encounter terrorists. And we're giving them the tools and information they need to do their jobs. We've established secure connections to emergency operations centers in every state and every governor's office to ensure that they get threat information on a real-time basis. We've helped states establish mutual aid agreements and reasonable response plans, so that when first responders need help from their neighbors they can be sure the right assistance will get to the right people at the right time.

We've provided more than $14 billion over the last four years to train and equip state and local first responders across America: funds for mobile command centers, communications equipment, mobile decontamination equipment, HAZMAT trucks, mobile WMD detection equipment and other capabilities they need to protect our citizens and our communities. Since 2001, we've trained more than 600,000 first responders, and more than tripled spending on homeland security. And all of you in this department, and the members of the Congress can be proud of the accomplishments and the progress we have made. (Applause.)

You have done all this, and more, under the skilled leadership of Tom Ridge. Tom is a longtime friend, and I thank him for his leadership and his dedicated service to our country. (Applause.)

And I have found an able successor in Mike Chertoff. As the 9/11 Commission said in its report, America is safer because of your efforts, but we are not yet safe. Mike Chertoff knows we cannot afford to become complacent. He understands that as we adapt our defenses, the terrorists will adapt their tactics in response. He understands they continue to pose a great threat to the American people.

Recently, we learned that Osama bin Laden has urged the terrorist Zarqawi to form a group to conduct attacks outside Iraq, including here in the United States. We're on a constant hunt for bin Laden. We're keeping the pressure on him, keeping him in hiding. And today, Zarqawi understands that coalition and Iraqi troops are on a constant hunt for him, as well. Coalition and Iraqi forces have caught and killed several of his key lieutenants. We're working every day and night to dismantle his network and to bring him to justice. (Applause.)

Bin Laden's message is a telling reminder that al Qaeda still hopes to attack us on our own soil. Stopping them is the greatest challenge of our day. And under Mike's leadership, we will do everything in our power to meet that challenge. Mike is wise and he is tough -- in a good way. (Laughter.) And he knows the nature of the enemy. As head of the criminal division at the Department of Justice, Mike helped trace the September 11th attacks to the al Qaeda network. And it didn't take him very long to do so. He understands that the terrorists are brutal and determined, and that to stop them all our agencies must work more closely together using every resource and technological advantage we have.

I have given Mike an ambitious agenda to carry out. We will continue to work to fully integrate the agencies within the Homeland Security Department. We will build on the progress that has been made. We will continue working to reduce our nation's vulnerabilities and prepare effective responses for any future attack. We will speed the development of new 21st century vaccines and treatments to protect Americans against biological, chemical, nuclear and radiological attacks. We will continue our historic investments in homeland security to match the threats facing our country. We will protect the American people from new dangers while protecting their civil liberties.

Mike understands that we need to work closely with state and local officials because he has shared their vantage point. Like men and women who wear our nation's uniform on distant battlefields, those who wear the uniform here at home risk their lives every day to protect our people. By their service and sacrifice, our police, our firefighters and emergency rescue personnel are making the homeland safer. And our nation must constantly thank them for their work.

Mike is the right person to lead this department in this vital work. He knows that to win the war on terror abroad, we always must remember where it began -- here in the homeland. He will be an outstanding Secretary of Homeland Security. Mike, thank you for willing -- for your willingness to serve our nation once again. God bless. (Applause.)

MR. CHERTOFF: Thank you. Mr. President, members of my family, friends and colleagues. Mr. President, I am grateful to you for affording me the privilege of working under your leadership to protect and safeguard our nation. As you have so powerfully described, since September 11th, the job of defending the homeland has become the challenge and the calling of our generation. Under your steadfast and determined guidance, our country has risen to meet the threat of the age of terror. We have responded in a unified, strategic and comprehensive manner, and as a result, America today is safer, stronger and more secure.

Thousands of men and women, including many here, now stand watch across this country and overseas guarding our families and our freedoms. In taking the oath as Homeland Security Secretary, I am honored to join these dedicated public servants. Ours is a Department in which the American public is deeply invested. Just in the past few weeks, I have encountered many citizens who have personally expressed to me their gratitude, their hopes and their prayers for the work of DHS. These citizens -- indeed, all Americans -- have placed their trust in the men and women who carry out the important work of homeland security. I look forward to carrying out this vital charge as we strengthen the protections already in place at our ports of entries, in our skies overhead, and in our cities and our communities.

My predecessor, Secretary Tom Ridge, his Deputy, Jim Loy, and other founding leaders of DHS did a superb job in launching this new Department. In building on their achievements, I am conscious that my new leadership team and I will be standing on their shoulders and building on what they accomplished.

Our task now is to advance the exceptional achievements of the first two years of this department, to meet and manage the threats of today, and to prepare to confront the risks of the future. Our mission is no less than this: protect America, while fostering the values of liberty, privacy and opportunity we all hold dear. 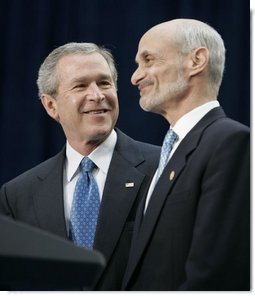 For their willingness to stand beside me in this endeavor, I thank Meryl and my children. Once again, you have given me your love, your sacrifices and your constant support. And as all members of this department know, the work we do is possible only because of the support and sacrifices of our families and friends. (Applause.)

I first embarked on public service over 20 years ago as an assistant United States attorney in Manhattan. Now as Secretary of Homeland Security, I have taken the oath of office for the fifth time. As with each prior time I have sworn the oath, I dedicate myself to serving America and the American people.

Mr. President, again, thank you for this opportunity and for your resolute commitment to the cause of freedom and the protection of our families and our way of life. I appreciate the trust you have placed in me, and stand ready to devote my full energy and strength to the duty we all share: the preservation of our nation and the liberties we cherish. 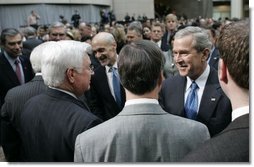