For Immediate Release
Office of the Press Secretary
March 2, 2005

THE PRESIDENT: Members of Congress. Mrs. Robinson, and Sharon and Dave, Laura and I are honored to be with you all as we honor your husband and your dad. Reverend Jackson. You know, I figure I'm the ninth speaker -- (laughter.) I spent a little time in baseball. Commissioner, it's good to see you and appreciate the McCourts being here of the great Los Angeles Dodgers family. But a lot of times, the ninth hitter was told by the manager, keep your swing short. (Laughter.) I kind of guess that's what Nancy Pelosi meant when I got up -- she said, you are the ninth speaker. (Laughter.) How about keeping it short? 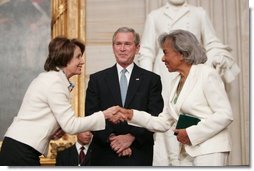 I'm honored to be here for the -- to present the Congressional Gold Medal to Mrs. Robinson. It's a great tradition of our Congress to honor fantastic and noble Americans, and we're doing just the thing with Jack Roosevelt Robinson.

You know, he was a great ball player. Anybody who follows baseball knows how great he was -- fantastic statistics: MVP, all the big honors you could get. But his electricity was unbelievable. Think about this. This is a guy who inspired little seven-year-olds to dream of wearing "42" and dashing for home in Brooklyn, and a seven-year-old like me hoping to get his Topps baseball card, even though I was an avid Giants fan. He was an amazing guy. And his story was powerful then, and it is powerful today.

His story is one that shows what one person can do to hold America account -- to account to its founding promise of freedom and equality. It's a lesson for people coming up to see. One person can make a big difference in setting the tone of this country.

I found Martin Luther King's quote about him interesting. I'm sure you will, too. He said, "He was a freedom rider before freedom rides." That's a pretty high compliment, when you think about it. To me, it just says, courage and decency and honor.

This son of Georgia sharecroppers was taught by his mother that the best weapon against racism was the use of his talent, his God-given talent, not to waste a minute, and he didn't. And that spirit, passed on from mother to son, and now son to family, still lives through the Jackie Robinson Foundation. The Jackie Robinson Foundation is a noble cause to help academically-gifted students of color go to college. I know the Dodgers will continue to support that foundation. I hope baseball continues to do so, as well. 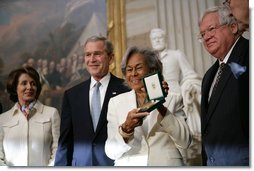 It is my honor now to join Speaker Hastert and Senator Stevens in presenting the Congressional Gold Medal to Rachel Robinson, in the name of her husband, the great baseball star and great American, Jackie Robinson. (Applause.)

(The medal is presented.)