For Immediate Release
Office of the Press Secretary
February 23, 2005 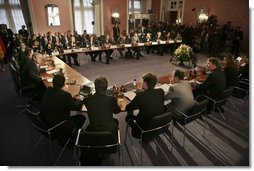 I really want to thank you for your time, and I appreciate your willingness to come and speak to two old guys like me and Gerhard. Isn't that right, Gerhard?

PRESIDENT BUSH: Older man. (Laughter.) But this is a fantastic moment. This is going to be one of the highlights of my trip to Europe, and I can't thank you enough for being here.

Gerhard, do you want to say a few things?

CHANCELLOR SCHRÖDER: No, you can --

Q Okay, once again, welcome. Mr. President, you said in a recent interview with The Washington Times that if people want to get a glimpse of how you think about foreign policy, they should read The Case for Democracy, by Netan Sharansky. In this book, as you know, Sharansky suggests the so-called town square test.

Q Can a person walk into the middle of the town square and express his or her views without fearing arrest or physical harm. My question for you: Did Sharansky's book have influence on your approach toward Russia?

THE PRESIDENT: First of all, Sharansky's book confirmed how I was raised and what I believe, and it's essentially this: that deep in everybody's soul -- everybody's soul, is this deep desire to be free. That's what I believe. No matter where you're raised, no matter your religion, people want to be free; and that a foreign policy, particularly from a nation that is free, ought to be based upon that thought. You know, you can't discriminate. Freedom is not a discriminatory thought, at least in the White House -- in other words, if you say, certain people should be free, but others shouldn't free. It's a universal thought, as far as I'm concerned.

And therefore, our foreign policy is based upon this notion that the world is a better place when people are able to realize that which is embedded in their soul, because in that book, also, he talks about the idea that free societies are peaceful societies -- democratic societies don't attack each other. And Europe is a classic example of countries which have embraced values based upon democracy, and is peaceful. 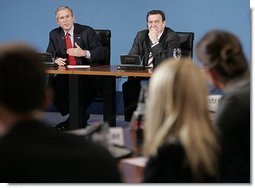 One of the interesting things about being with a Chancellor, or in Putin's case, a President, is that we share something: We make decisions. And I like to learn from people how they make decisions. They say to me, what's the President like, give me a job description. The job description is, decision-maker. And maybe we can talk a little bit about that later on. But, yes, it applies to Russia, as well.

Q My name is Loretta Wurtenberger, from Blue Corporate Finance. Concerning Russia, the Iraq crisis has made quite clear to all of us how dependent we are on the oil resources from that region. And for the future, it is certainly necessary for us all to kind of look for strategies to become more independent of these resources.

Q Does this aspect, for you, have influence on your relationship to Russia?

PRESIDENT BUSH: That's an interesting question. The foreign policy of our country for years -- I'm stepping back, I'm kind of going to branch out from Russia, and I'll get back to Russia. For years, there was this sense that we could tolerate tyranny for the sake of energy. And yet, beneath the surface of that policy lurked this hatred and feeling of oppression and frustration and hopelessness, which lent itself to an ideology of hatred that ended up manifesting their hatred on America.

And let me say something about September the 11th. I think this will help frame the conversation as we go forward. For some, September the 11th was a passing moment in history. In other words, it was a terrible moment, but it passes. For me, and my government, and many in the United States, it permanently changed our outlook on the world. Those two attitudes caused us, sometimes, to talk past each other, and I plead guilty at times. But as this conversation goes on, I want you to remember that point of view.

As a result of feeling like -- that my main obligation is now to protect the American people, and to confront an ideology of hate. We are no longer -- our primary objective is the spread of freedom. The best way to diversify, at least for my country -- and I don't want to raise a sore subject here -- but diversify away from dependence on foreign sources of energy, is for us to take advantage of new technologies and expand safe nuclear power in the United States of America.

To me, that would achieve several objectives. One, it's a renewable source of energy; two, it's a domestic source of energy; and three, it would help us meet our obligations to clean air requirements. Unfortunately, it's an issue that's hard to get through our Congress. I mean, there's a lot of people still fearful of nuclear power, and it's a debate I've engaged in. It's a subject I brought up in my State of the Union address, and it's a subject I'll continue to talk about, because I think it is a way for the United States to be less dependent on foreign sources of energy, which is good for our economy, and, frankly, helps us with foreign policy.

(This ends the open part of the roundtable.)