For Immediate Release
Office of the Press Secretary
February 22, 2005

PRESIDENT BUSH: I just had a good breakfast. I always enjoy being with my friend, Tony Blair. We talked about the progress being made in Iraq, and I want to congratulate you on your vision. The Iraqis are -- you know, have defied the terrorists and showed the world they want to live in a free society, and we're there to help them achieve that. 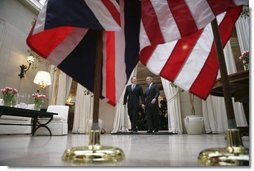 I'm looking forward to the NATO meeting today. NATO is a vital relationship for the United States and for Europe. And I'm looking forward to meeting with the EU, as well. As I said in my speech yesterday, a strong Europe is very important for the United States, and I really meant that. And the Prime Minister is one of the strong leaders in Europe, and I really enjoy my relationship with him.

PRIME MINISTER BLAIR: First of all, I'm pleased to come and talk to the President again and go through the range of different issues that we face in the world today. And I both welcome the President's speech yesterday very much and thanked him for it. And I think what it sets out is a very clear way forward for us now. Whatever the differences in the international community have been over the past couple of years, I think we have a really solid basis now for going forward in a unified way. And if we take that opportunity, it will be greatly for the benefit of the international community.

We can see this, obviously, with Iraq, where after the democratic elections that are held now, it's possible to see a way forward in which Iraq can become a stable and a prosperous and a democratic state. And after all the tragedies of the past and the dictatorship and the loss of life under Saddam, there's now real prospect for the Iraqi people. And that, joined to what has happened in Afghanistan, I think gives us real hope for the future.

In addition, the President set out very clearly a way forward on the Middle East peace process. There's a renewed sense of vigor and optimism in that process. And with the London conference coming up next week, I think we've got every possibility now of trying to reach a settlement, which I think would do so much for international relations worldwide.

Then, of course, we also went through many of the other issues, to the upcoming G8 later in the year and so on. So it was, as ever, a very constructive, very useful discussion across a whole range of issues. And as I say, I think that yesterday's speech and today's meeting at NATO gives us an opportunity to restate for people in Europe and in America the fundamental importance of this transatlantic alliance. It's been a cornerstone of our security for many, many years; it's based on shared values; it's absolutely the right thing for us to have at the center of our relations. And we'll do everything we can to make sure that that relationship is strong.