For Immediate Release
Office of the Press Secretary
February 18, 2005

The bill I'm about to sign is a model of effective, bipartisan legislation. By working together over several years, we have agreed on a practical way to begin restoring common sense and balance to America's legal system. The Class-Action Fairness Act of 2005 marks a critical step toward ending the lawsuit culture in our country. The bill will ease the needless burden of litigation on every American worker, business, and family. By beginning the important work of legal reform, we are meeting our duty to solve problems now, and not to pass them on to future generations. 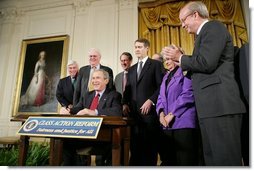 I appreciate so very much the leadership that Senator Frist and Senator McConnell have shown on this bill in the United States Senate. I want to thank Senator Chris Dodd and Senator Tom Carper and Senator Craig Thomas, as well for working in a bipartisan fashion to get this good bill to my desk.

Congress showed what is possible when we set aside partisan differences and focus on what's doing right for Congress, and you all are to be -- I mean, for the country -- and you're to be credited for your good work. Thank you very much. (Applause.)

I welcome our new Attorney General -- oh, right there. (Laughter.) How quickly they forget in Washington. (Laughter.) Al Gonzales. Proud you're up here, Al. Hector Barreto, the SBA. Thank you, all the business leaders, community leaders, consumer groups who care about this issue. Thanks for your hard work. Thanks for being patient. Thanks for not becoming discouraged. And thanks for witnessing the fruits of your labor as I sign this bill.

Class-actions can serve a valuable purpose in our legal system. They allow numerous victims of the same wrong-doing to merge their claims into a single lawsuit. When used properly, class-actions make the legal system more efficient and help guarantee that injured people receive proper compensation. That is an important principle of justice. So the bill I sign today maintains every victim's right to seek justice, and ensures that wrong-doers are held to account.

Class-actions can also be manipulated for personal gain. Lawyers who represent plaintiffs from multiple states can shop around for the state court where they expect to win the most money. A few weeks ago, I visited Madison County, Illinois, where juries have earned a reputation for awarding large verdicts. The number of class-actions filed in Madison County has gone from two in 1998 to 82 in 2004 -- even though the vast majority of the defendants named in those suits are not from Madison County. Trial lawyers have already filed 24 class-actions in Madison County this year. We're in February. (Laughter.) Including 20 in the past week -- after Congress made it clear their chance to exploit the class-action system would soon be gone. 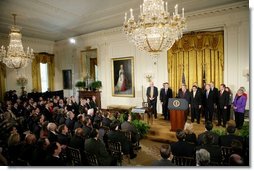 Before today, trial lawyers were able to drag defendants from all over the country into sympathetic local courts, even if those businesses have done nothing wrong. Many businesses decided it was cheaper to settle the lawsuits, rather than risk a massive jury award. In many cases, lawyers went home with huge pay-outs, while the plaintiffs ended up with coupons worth only a few dollars. By the time the settlement in at least one case was finished, plaintiffs actually owed their lawyers money.

A newspaper editorial called the class-action system "an extortion racket that only Congress can fix." This bill helps fix the system. Congress has done its duty, and I'm proud to sign it into law.

Over the past few years I've met people from all over the country who know the importance of class-action reform firsthand, and three of them are with us today. Marylou Rigat lives in Connecticut, yet a class-action involving her faulty roof was resolved by a judge in Alabama. The award covered only a fraction of the cost of new shingles, but that wasn't Marylou's biggest problem. She had no idea she was part of the class-action in the first place, and no one contacted her about her award. She only learned by accident when she called the company about her warranty. And then she found out there was nothing more she could do.

Hilda Bankston is with us. And her late husband used to own a drugstore in Fayette, Mississippi. Their business was doing well, until the store got swept up in massive litigation just because it dispensed prescription drugs for a certain drug -- prescriptions for a certain drug. She had to sell the pharmacy six years ago. But she's still getting dragged into court, again and again. Here's what she said: "My husband and I lived the American Dream until we were caught up in what has become an American nightmare."

Alita Ditkowsky is with us. She was part of a class-action against a company that made faulty televisions. When the case was settled in Madison County, Illinois, Alita's lawyer took home a big check while she got a $50 rebate on another TV, built by the same company that had ruined the first TV. (Laughter.) Here's what she said: "I'm still left with a broken TV." (Laughter.) "He got $22 million. Where's the justice in this?"

I want to thank you all for letting me use your stories, not only here, but during different events we've had in highlighting the need for class-action reform, because this act will help ensure justice by making two essential reforms. First, it moves most large, interstate class-actions into federal courts. This will prevent trial lawyers from shopping around for friendly local venues. The bill will keep out-of-state businesses, workers, and shareholders from being dragged before unfriendly local juries, or forced into unfair settlements. And that's good for our system, and it's good for our economy.

Second, the bill provides new safeguards to ensure that plaintiffs and class-action lawsuits are treated fairly. The bill requires judges to consider the real monetary value of coupons and discounts, so that victims can count on true compensation for their injuries. It demands settlements and rulings to be explained in plain English, so that class members understand their full rights.

These are needed reforms. It's an important piece of legislation. It shows we're making important progress toward a better legal system.

There's more to do. Small business owners across America fear that one junk lawsuit could force them to close their doors for good. Medical liability lawsuits are driving up the cost for doctors and patients and entrepreneurs around the country. Asbestos litigation alone has led to the bankruptcy of dozens of companies and cost tens of thousands of jobs, even though many asbestos claims are filed on behalf of people who aren't actually sick.

Overall, junk lawsuits have driven the total cost of America's tort system to more than $240 billion a year, greater than any other major industrialized nation. It creates a needless disadvantage for America's workers and businesses in a global economy, imposes unfair costs on job creators, and raises prices to consumers.

We have a responsibility to confront frivolous litigation head on. I will continue working with Congress to pass meaningful legal reforms, starting with reform in our asbestos and medical liability systems.

Once again, I want to thank you all for the hard work on this important legislation. Class-action reform will help keep America the best place in the world to do business. It will help ensure justice for our citizens, and I'm confident that this bill will be the first of many bipartisan achievements in the year 2005.

And now it is my honor to sign the Class-Action Fairness law. (Applause.)