For Immediate Release
Office of the Press Secretary
February 14, 2005

THE PRESIDENT: Good morning. Laura and I are pleased to be here with Al Gonzales, his wife Becky, and their wonderful family. Thank you all for coming. I turned to Al and said, "It seems like they're cheering pretty loud." He said, "Most of them work for me now." (Laughter.)

For the past decade, Al has been a close advisor, an honorable public servant, and a dear friend. Now, he assumes a new title. Today it is my honor to call this son of Humble, Texas, the 80th Attorney General of the United States. (Applause.) 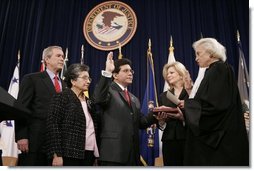 I appreciate Justice Sandra Day O'Connor for administering the oath, and admitting publicly that she was born in Texas. (Laughter.) I want to thank the current and former members of my Cabinet who are here. I appreciate Senator Pat Leahy, Senator Judd Gregg and Kathy, Senator John Cornyn and Sandy, Senator Mel Martinez for joining us today. I thank Congresswoman Grace Napolitano for joining us. I thank the other distinguished guests who are here, and I thank the Texans who have come up. (Applause.)

As Attorney General Gonzales begins his service, he will build on the outstanding work of Attorney General John Ashcroft. (Applause.) Over the past four years, Attorney General Ashcroft has started the Department of Justice on the right course in the war on terror; he's helped reduce violent crime to a 30-year low; he's taken vital new steps to protect children from exploitation. John Ashcroft has worked tirelessly to make our nation safer and more just, and America is thankful for your lifetime of service. (Applause.)

Attorney General Gonzales now joins every employee at the Department of Justice in an urgent mission to protect the United States from another terrorist attack. Few periods in our history have demanded so much of this department. With Al's principled leadership, the Department of Justice will continue this important mission, and will defend the security of all Americans and the liberty of all Americans.

The men and women of this department are meeting your duty every day -- from your headquarters in Washington to U.S. Attorneys offices across the country, to dangerous posts overseas. You've reorganized your resources to confront the threats of this new war. You've devised effective methods to investigate and prosecute terrorists. Some of you have volunteered for demanding new duties in complex areas such as intelligence and counterterrorism. Our nation is grateful for your dedication and sacrifice.

And in return, we must provide you all the tools you need to do your job. And one of those tools is the Patriot Act, which has been vital to our success in tracking terrorists and disrupting their plans. Many key elements of the Patriot Act are now set to expire at the end of this year. We must not allow the passage of time or the illusion of safety to weaken our resolve in this new war. To protect the American people, Congress must promptly renew all provisions of the Patriot Act this year. (Applause.) 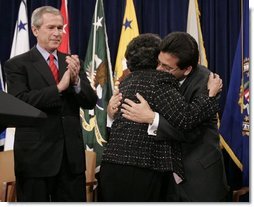 Your mission to ensure equal justice for every American extends far beyond the war on terror. By aggressively prosecuting gun criminals and drug dealers, you make neighborhoods safer for all families. By holding corporate wrongdoers to account, you build confidence in our economy. By protecting victims of child abuse and domestic violence, you help guarantee a compassionate society. And by defending the civil rights of every American, you affirm the dignity of every life, and you set an example of liberty for the entire world.

As we strive to provide equal justice, we must ensure that Americans of all races and backgrounds trust the legal system. By spreading the use of DNA analysis, we can solve more crimes, lock up more criminals, and prevent wrongful conviction. So I've asked Congress for more than a billion dollars over five years to expand this vital technology. And to help ensure that the death penalty is applied justly, I've also requested new funding to train prosecutors, judges and defense counsels in capital cases.

To maintain confidence in the legal system, we must ensure that judges faithfully interpret the law, not legislate from the bench. I've a constitutional responsibility to nominate well-qualified men and women for the federal courts -- I have done so. And I've benefited greatly from the sound judgment of Attorney General Gonzales on picking qualified people to serve on our benches. I will continue to rely on his advice. And the United States Senate must also live up to its constitutional responsibility. Every judicial nominee deserves a prompt hearing and an up or down vote on the floor of the United States Senate. (Applause.)

As he embarks on all these duties, Attorney General Gonzales has my complete confidence. From his early days of selling soda at Rice University football games, to his time in the Air Force, to his distinguished legal career and service on the White House staff, Al has been a model of courage and character to his fellow citizens. I've witnessed his integrity, his decency, his deep dedication to the cause of justice. Now he will advance that cause as the Attorney General and ensure that more Americans have the opportunity to achieve their dreams.

From the day the President announced my nomination as the Attorney General of the United States, three months ago, I have thought often about how to best prepare to meet the awesome responsibilities of this office. Outside these walls, the cries of those powerless souls who are injured, disenfranchised, or otherwise aggrieved may, indeed, be faint. But those same pleas for help echo powerfully within the Department of Justice. Every day, like a steady drum beat, we are asked to provide an answer to a problem, to secure a remedy, to be a champion. And every day, this department responds, as it has done so time and time again throughout the history of our beloved America. 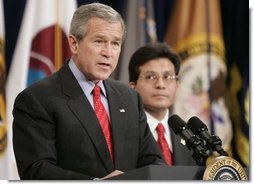 There has been much discussion during my confirmation about the appropriate role of the Attorney General, certainly an important and legitimate debate about the individual viewed by many as the primary guardian of our rights and protector of our freedoms. Undeniably, the Attorney General is a member of the President's Cabinet, a part of his team. But the Attorney General represents, also, the American people, and his first allegiance must always be to the Constitution of the United States.

And so I rise today to reassure you that I understand the special role of this office, and to commit to do my best on behalf of the American people, to fulfill the confidence and trust reflected in my appointment. I rise also to express my thanks to all of you here and around the country, particularly in Texas, who have walked with me, even for just a short time, along my journey.

My words, I fear, are inadequate to convey my gratitude for picking me up when I have stumbled. Can a son repay the debt reflected in a lifetime of sacrifice by his parents? Can a husband express in appropriate words and deeds his love and respect for the many years of affection and loyalty of a loving wife? Can a friend compose a message of sufficient gratitude for a President who has been an inspiration and mentor? Mom, Becky, Mr. President: I do not believe I can, nor do I intend to even try in this abbreviated ceremony, other than to acknowledge, from the bottom of my heart, how much each of you has meant in my life. In the years ahead, I hope that my service as Attorney General will serve to honor your faith and trust in me.

Finally, I rise to embrace the employees of the Department of Justice. I assume this office knowing that the dedicated men and women here are focused on protecting the lives and the liberties of our citizens. Tremendous strides in the war on terrorism were made under the leadership of Attorney General John Ashcroft, and I thank him for his service to our country and to the cause of freedom. Like John, I am but one instrument in our battle for freedom and the protection of our rights. And I am confident that in the days and years ahead, we in the department will work together tirelessly to address terrorism and other threats to our nation, and to confront injustice with integrity and devotion to our highest ideals. 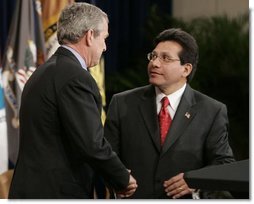 America is my home. I believe in her promise, and I will do what I can to secure that promise for future generations of our children. America is great, not because of our military might or our economic strength, but because of the greatness of Americans. And I welcome the opportunity to stand shoulder to shoulder, side by side, with each of you, to preserve our heritage, rich in liberty and justice for all.

Thank you, and may God continue to bless the United States of America. (Applause.)