For Immediate Release
Office of the Press Secretary
February 9, 2005

Thank you all for coming. Welcome back to the Oval Office. It is my great pleasure to welcome my friend back here to discuss important international policy and policy related to our bilateral relationship. We discussed, and will continue to discuss, very important issues. We'll talk about, of course, Iraq and our mutual desire to train Iraqis so that they can defend their own freedom. We'll talk about my trip to Europe. I'm looking forward to advice from my friend. 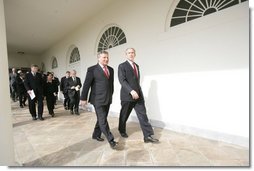 We'll continue to discuss the Ukraine. And let me just step back and say that I'm impressed by the leadership of President Kwasniewski when it came to the Ukraine. He showed remarkable leadership. And the people of Ukraine are better for it, and the world appreciates that and I appreciate it.

We'll spend time continuing to talk about the importance of our bilateral relationship, whether it be trade and commerce, or whether it be the ability of Polish folks to travel to the United States of America. The visa policy of the country has been under review for a while, and now we've got a way forward to make trips to America easier for Polish citizens.

I want to thank you for your leadership on that issue, Mr. Prime Minister. I mean, Mr. President. Excuse me. I demoted him. (Laughter.) Well, it's not a demotion.

PRESIDENT BUSH: It's a lateral transfer. (Laughter.) Anyway, I am thrilled you're here, and look forward to seeing you not only over lunch, but in Brussels on my trip. Welcome.

PRESIDENT KWASNIEWSKI: Thank you. So I should speak Polish in the beginning.

Mr. President, ladies and gentlemen, first of all, I would like to express my joy that this is my fourth visit already to the White House, visiting President George W. Bush.

I want to tell you that we talked about Polish-American cooperation, which has now a strategic, lasting character. And in the recent years, we have had many successful events in cooperation with the United States.

During our meeting today we talked about Iraq. Poland participates in the stabilization mission in Iraq, and we are full of optimism thinking about that country and about the successful completion of our mission.

We have been talking about the transatlantic relationships, and we are very happy that America is getting closer and is having better and better relations with our European neighbors and also with Poland. We talked about bilateral cooperation, and both President Bush and myself talked about the adoption of the road map that is going to solve the visa problem. And it implies concrete decisions that are going to be made in relation to the visa regime, doing away with some old information -- old data, statistics concerning the immigration violation from before 1989, easing the procedures, review of different -- that are connected to the visa system, and further cooperation with the Congress in order to facilitate the process as much as possible. 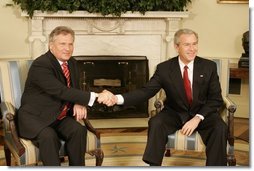 We hope that the road map that has been accepted will be a very good solution. Poland will have to observe many rules, and it will bring about a final doing away with this problem that has been present in our talks for many years now.

I would like also to say that as far as the thank-you words concerning Ukraine are concerned, everything wouldn't be possible without the participation of the United States. And without the United States' role, it wouldn't be possible to finish the crisis situation in Ukraine and strengthen democracy in that country. It is the success of Ukraine and the Ukrainian people, but it is also the success of all of us.

Q Mr. President, Secretary Rice said today in Brussels that the United States would not tolerate foot-dragging by Tehran on accounting for their nuclear program. Is time running out for Iran to come to terms with the European negotiators?

PRESIDENT BUSH: The Iranians just need to know that the free world is working together to send a very clear message: Don't develop a nuclear weapon. And the reason we're sending that message is because Iran with a nuclear weapon would be a very destabilizing force in the world.

And I look forward to going over to Europe to continue discussing this issue with our allies. It's important we speak with one voice. I'm very pleased with the response that European leaders have given to Dr. Rice on this issue. She has made -- her trip, by the way, has been a fantastic trip. I want to thank Aleksander, the President, for being so gracious to her on the first leg of her trip, or one of the first legs on her trip. But the message is, is that we're going to speak with one voice, and we'll continue to do so.

PRESIDENT BUSH: Well, we've got a way forward to answer the questions of a lot of the members of the United States Congress to get this issue solved. And the President has been very -- hard at work in helping develop a road map that is fair to the Polish people. And I adopt the principles and accept the recommendations of the road map, and that will become the basis for legislation. 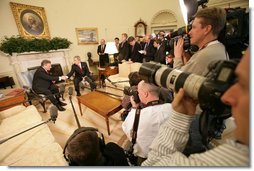 Q Mark McClellan is now acknowledging the new Medicare drug benefit will cost $720 billion, far more than the White House initially said. Will you consider steps to lower the cost? Might Medicare be a bigger problem now than Social Security?

PRESIDENT BUSH: Well, there's no question that there is a unfunded liability inherent in Medicare that we're -- Congress and the administration is going to have to deal with over time. Obviously, I've chosen to deal with Social Security first. And once we accomplish -- once we modernize and save Social Security for a young generation of Americans, then it will be time to deal with the unfunded liabilities in Medicare. The same issue that deals with -- creates a problem with Social Security creates a problem for Medicare. In other words, baby boomers are retiring with fewer payers going into the system. And I look forward to working with them.

Listen, the reforms haven't even begun yet. I signed a piece of legislation last year and the major reforms of providing prescription drugs for our seniors kicks in next year. And I look forward to watching those reforms take effect. I'm convinced they'll have cost savings for our society, and I know it will make the life of our seniors better.

And so we look forward to working with Congress to make sure that the Medicare reforms that are in place are fully enacted and the people can realize the benefits of them.

Q I've got a question to President Bush. Sir, will the United States increase its assistance in modernization of Polish armed forces?

PRESIDENT BUSH: We -- Aleksander and I, the President and I talked about that. He has been very insistent that -- about our mil-to-mil relations. He's been very forthright and very clear, and I appreciate his leadership on this issue. I am -- intend -- I say "intend" because our system is one where I make requests; Congress has to appropriate the money. But we will make requests that will enable there to be a mil-to-mil expenditure to help Poland modernize and fulfill its mission of about $100 million this year.

Now, again, I repeat, I don't get to write the checks in the American system; the government -- the Congress does that. But I get to put out requests. And I assured the President that would be -- when it's all said and done, that would be the request that we would put forward. I'm confident the Congress will respond.

Listen, Poland has been a fantastic ally, because the President and the people of Poland love freedom. And I know the people of your country must have been thrilled when the millions of people went to the polls and showed that people from all parts of the world want to live in a free society, just like your great nation has shown the world over the last decade.

So, Mr. President, welcome. Thanks for coming. I value our friendship.