For Immediate Release
Office of the Press Secretary
February 8, 2005

THE PRESIDENT: Good afternoon and welcome to the White House -- the people's house. Laura and I are pleased you're here, so we can celebrate together the 79th Celebration of African American History Month. We're here today because of the dedication and persistence of a man named Dr. Carter G. Woodson. 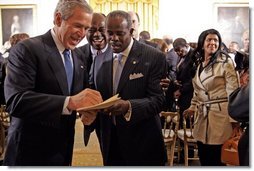 In the 1920s, Dr. Woodson argued that if African Americans were to take their rightful place in society, young Americans of all races needed to learn about the black contribution to our history and culture. So in 1926, he launched the first black history week. Today, a movement that began in black churches and schoolrooms is observed all across America -- including the White House. Welcome. (Applause.)

The Civil Rights pioneers of Dr. Woodson's era also had another dream: a national museum to celebrate the history and achievements of African Americans. On December 16, 2003, I was proud to sign legislation that will create the National Museum of African American History and Culture within the Smithsonian Institution. (Applause.) Laura and I are pleased to welcome to the White House so many who were instrumental in the passage of that legislation, and those who will help us make the museum a reality.

It's such an honor to be with Dr. Dorothy Height -- you look great. Thanks for coming, Dorothy. (Applause.) Members of the Council of the National Museum of African American History and Culture, thank you for serving.

Today is the first day in which folks are able to contribute to the building of the museum. Laura and I want to be one of your first contributors, and so I -- (applause.) You know where to find me. (Laughter.)

I'm honored that members of the original Tuskegee Airmen have joined us; we're proud of your service. (Applause.) I told the members of the Tuskegee Airmen how important the example they set for those who wear our uniform today and it is a shining example. And you've just got to know that you've made a huge difference in the lives of a lot of people. 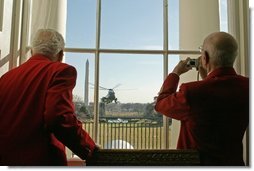 As we celebrate this month, we must remember a great actor, Ossie Davis, who passed away on Friday. Laura and I, and many in this room, were honored to salute Ossie and his remarkable wife, Ruby Dee, at the Kennedy Center Honors last December. The entire Davis family are in our prayers, may God comfort them in their sorrow.

I appreciate so very much the chance to have gone to Goree Island in Senegal. Laura and I traveled there during my presidency. It was an amazing experience for us. It was gut-wrenching to see the cramped cells where Africans were held right before they began their journey to America in chains. We stood in the "door of no return." I'll never forget that feeling. It's a door through which so many innocent men, women and children passed through. They would be loaded as cargo on the ships for the long voyage across the Atlantic to a future of slavery and servitude.

And so when the National Museum of American History and Culture opens -- and it will open -- visitors will be able to have a much more vivid sense of what slavery meant for real men and real women. It is important to know -- and this museum is going to be a really important museum, because it's important that our children know that there was a time in their nation's history when one in every seven human beings was the property of another. They need to know how families were separated, denied even the comfort of suffering together. It's an important lesson of a shameful period that the young must never forget.

And they need to know that bigotry and discrimination did not end with slavery; that within the lifetimes of their own parents and grandparents, Americans were still barred by law from hotels and restaurants; made to drink from separate water fountains; forced to sit in the back of a bus -- all because of the color of their skin. We need to teach them about the heroes of the civil rights movement, who by their courage and dignity forced America to confront the central defect of our founding.

And we all need to learn more about the men and women whose determination and persistent eloquence forced Americans of all races to examine our hearts, revise our Constitution and laws, and make America into the nation it was always supposed to be. 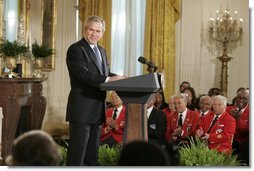 The theme of this year's African American History Month is the 100th anniversary of "the Niagara Movement." Led by W.E.B. DuBois and John Hope and William Monroe Trotter, the Niagara Movement rejected any accommodation with discrimination, and challenged our nation to grant its African American citizens the same rights enjoyed by other Americans. In so doing, it helped lay a foundation for the civil rights movement that would change America in the decades that followed.

Like Dr. Woodson, W.E.B. DuBois placed his hopes in our youngest citizens -- those who had not yet been taught to hate. So he directed his call to them. He said, "We appeal to the young men and women of this nation ... Stand up for the right, prove yourselves worthy of your heritage and ... dare to treat men as men." His appeal echoes across a century, doesn't it? It made sense then; it makes sense now. And serves to remind us that while slavery has been abolished and segregation outlawed, the struggle for justice and equality has not yet ended.

At the start of this new century, we will continue to teach habits of respect to each generation. We will continue to enforce laws against racial discrimination in education and housing and public accommodations. We'll continue working to spread hope and opportunity to African Americans with no inheritance but their character -- by giving them greater access to capital and education, and the chance to own and build and dream for the future. In this way, African Americans can pass on a better life and a better nation to their children and their grandchildren, and that's what we want in America. (Applause.)

We're making progress, but there's more work to be done. Today, American schools are no longer separate, but they're not yet equal. Too many of our children still face what I have called the soft bigotry of low expectations. With the No Child Left Behind Act we've raised expectations. We believe every child can learn and we expect every school to teach. And we measure. And guess what's happening? Test scores are going up. There's an achievement gap for minority children that is closing in America.

We'll work to strengthen families. Children from two-parent homes are less likely to end up in poverty or drop out of school. It's important that families be strong in America. HIV/AIDS brings suffering and fear into so many lives, and so we need to focus on fighting this disease among those with the highest rates of new cases -- African American men and women. We need to give our young people, especially young men in inner cities, better options than apathy or gangs and jail. And I want to thank Laura for taking on this incredibly important initiative to help young men realize a great future in America. (Applause.)

You know, in the last half-century, the cause of liberty has made great strides in this country, and around the world. At each stage, and on every front, African Americans have helped to lead this advance. African Americans struggled peacefully for their own freedom on the streets of Birmingham and on the Mall here at Washington, D.C. Some of you were probably there. They have fought for America's freedom on distant battlefields -- and at this moment many are serving bravely in Afghanistan and Iraq, And we respect their courage and we honor their sacrifice.

They know, as we do, that success of freedom on the home front is critical to its success in foreign lands. As I said in my inaugural address, we cannot carry the message of freedom and the baggage of bigotry at the same time. (Applause.)

We've made progress, and our work is not yet done. But we can proceed with faith in our country and confidence in our cause. See, history moves toward freedom because the desire of freedom is written in every human heart. As W.E.B. DuBois declared nearly a century ago, "The battle for humanity is not lost or losing ... The morning breaks over blood-stained hills. We must not falter, we must not shrink. Above are the everlasting stars."

I want to thank you all for coming. Thank you for helping us celebrate this month, as well as to make it clear to our fellow citizens we have a chance to build a fantastic museum, right here in the heart of Washington, D.C., on the Mall -- (applause) -- to stand proud -- and I'm confident there will be an appropriate web page -- (laughter) -- for people to be able to tap in. Perhaps you should start, if you're interested, in going to the Smithsonian web page, and I suspect there may be an avenue that will direct you toward this important museum and cultural center, that will enable our fellow citizens to participate in helping to build it.

There will be a reception at the end of the hall here. We're really thrilled you're here. And may God continue to bless our great country. (Applause.)