For Immediate Release
Office of the First Lady
February 3, 2005

MRS. BUSH: Thank you very much, Lamar. Thanks to all of you. I'm so excited to be here today. Lamar has had a great story for us. He's an inspiration to us, and I know you are really proud now that young people look up to you for inspiration, just like you looked at Jack and your other mentors. 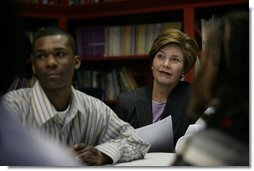 I want to thank Jack Law and Steve Highsmith and Rick Smith for your warm welcome to the Germantown Boys and Girls Club. And special thanks also to Roxanne Spillett, President of the Boys and Girls Clubs of America for your commitment to our nation's young people.

I love to visit Philadelphia and I've spent a lot of time here over the last four years. I've visited museums and historic sites. I've met many great students and teachers here. And I have to admit, I've eaten one too many Philly cheese steaks. (Laughter.) But I'm really happy to be here today at the Germantown Boys and Girls Club today.

Last night, during the State of the Union address, President Bush shared his goals for the next four years with the American people. The President reaffirmed his commitment to freedom for those who are oppressed around the world. As the people of Afghanistan and Iraq have shown, liberty triumphs over terror. President Bush will work to strengthen our economy, our Social Security system, and our schools for the next generation. And he called on all Americans to expand the values of family and compassion that are the foundation of our country.

The greatest strength of our country is the goodness of the American people. Faithbased and community groups bring greater hope to us all. And last night the President proposed an initiative to help these organizations reach out to young men and young women, but particularly to young men who find themselves lost or trapped in gangs. We want to show young people the ideal of manhood that respects life and rejects violence. The President's administration has proposed $150 million over three years to help young people in some of our toughest neighborhoods. Encouraging young men to see beyond a world of hopelessness is part of a national effort to help all young people reach their full potential.

Since my years as an elementary school teacher and librarian, through the years as First Lady of Texas and now as First Lady of the United States, I have worked to emphasize the vital importance of early childhood education for all children. The first five years of life are critical. They are a critical time for children to develop the physical, emotional and cognitive skills that they will need for the rest of their lives. Infants and toddlers need parents and caregivers who read to them, who foster their development so when they start school, they are ready to learn. 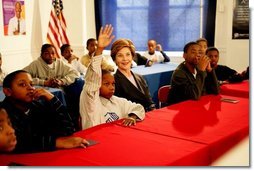 These years are also critical to the social and the behavioral development of young children. Research shows that boys who exhibit highly aggressive behavior as early as kindergarten have a greater chance of being involved with drugs and violence as adolescents. In fact, children who are overly impulsive at age three are twice as likely to be dependent on alcohol by age 21. And research from Yale University shows that there is substantive linkages between early reading failure and truancy and depression later in young people.

Our children are living in an increasingly complex world, and many boys especially are having a tough time growing up. Boys have a harder time learning to read, graduating from high school and achieving independence. They often fall behind girls in elementary school, and more boys drop out of high school than girls. Boys are also more likely to drink and use drugs to gain approval from their peers. And they are more likely than girls to be arrested for crimes.

Researchers are studying how boys differ from girls in their ability to cope with life changes. We have more to learn, but we do know that positive experiences within their families, schools and their communities can determine whether boys will live a life of peril or a life of promise.

Tyenell Rose said that Germantown Boys and Girls Club helped her son Tyalif turn his life around. Tyalif started getting in trouble in the first grade. His role as the class jokester escalated as he moved through the fourth grade. Last year, the school called Tyenell nearly every single day to report that her son was acting out. She turned to Jack Law in the Boys and Girls Club for help. Through oneonone mentoring and the Club's no tolerance policy, Tyalif is doing better in school. He is paying attention in class, and he has improved in reading, passing the state assessment test this year.

At home Tyalif listens to his mom and helps with his younger brother and sister. As a single mother, Tyenell welcomes his help, and she appreciates knowing that her children have somewhere safe to go after school. 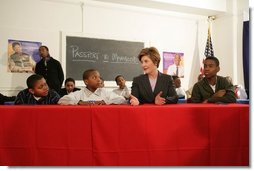 Tyenell said, "I'm fortunate to have a Boys and Girls Club in my neighborhood and to have great mentors for my children. My boys now have positive influences in their lives and I can be proud of the men that they are becoming." Thank you Tyenell and Tyalif for sharing your story. You are an inspiration to all of us.

We want all children to grow up healthy and safe. As parents, teachers and community leaders, we have a personal interest in seeing our children succeed. And as Americans, we have a moral responsibility to ensure that all children are prepared for school and for life. Children need strong role models and relationships with adults who nurture their confidence and their character. Young people must have safe places to go where they can express themselves and be heard. And all children need the experience and the joy of giving back to their own communities and helping other people.

This is what Boys and Girls Clubs of Philadelphia provide young people with every day. Like all Boys and Girls Clubs, Germantown is a great example of a communitybased center that engages young people through positive youth development. For children the Club is an alternative to the streets. Every Club has trained youth development professionals who provide positive role models for young people, and I visited with two of those young professionals and the groups of young people that they're working with today and it was very, very moving to see the Passport to Manhood class and the SMART Moves class, and thank you both. Thank you for letting me come sit in your classes with you and thank you for your great influence on young people.

In these classes, young people learn to resolve conflicts and how to prepare for college. They have their own passport in the Passport to Manhood class, which symbolizes their journey and in which they can capture their accomplishments. Shenelle Colman, who I visited in her SMART Moves class, teaches teens how to say no to drugs and sex. Through role playing, young people learn to resist peer pressure and learn how to make the right decisions.

By focusing on character and career development, early reading and community service, this Club is making an incredible difference in the lives of young people, and we see success like this in Clubs throughout the country. Research shows that where there is a Boys and Girls Club, there is generally a reduction in vandalism, drug trafficking and youth crime. While many programs are making a difference in the lives of boys and girls, we can and we must do more. We need the support of families, communities, schools and government to ensure that no child is left behind. 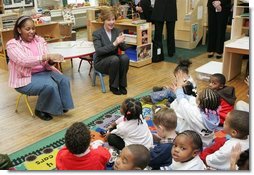 There are specific interventions and promising practices that work. These programs nurture a child's social and emotional health and their academic skills. They also teach parents how to develop a loving, stable home and how to solve problems. We must share this information widely so that communities can engage and empower young people. And parents, teachers, faithbased and community groups need to be part of this national conversation.

I encourage all Americans to get involved in the life of a child. Many volunteers dedicate their times at Boys and Girls Clubs. The President established USA Freedom Corps to help Americans find volunteer opportunities in their own home communities.

Over the next few months, I'll be traveling across the country visiting schools and faithbased centers and community programs like this one. I hope to learn more about the challenges boys face and how we can improve their lives. We can nurture our children's dreams, we can help them develop their talents and we can ensure their healthy development. Our success will not only affect the direction of their lives, but it will also affect the future of our country.

The challenges before us are great, and the time between childhood and adulthood, as George and I can attest, is all too short. But as the men and women of the Germantown Boys and Girls Club show, each of us has the power to make a difference in a young person's life.

Thank you all so much for being here. Now I want to introduce Roxanne Spillett, the President of the Boys and Girls Clubs of America. (Applause.)