For Immediate Release
Office of the Press Secretary
February 1, 2005

American Heart Month, 2005
A Proclamation by the President of the United States of America


The miracles of modern medicine offer hope to those affected by heart disease, yet there are also simple measures that Americans can take to help prevent the disease. During American Heart Month, I encourage all Americans to take action to help reduce their risk and increase awareness of heart disease. 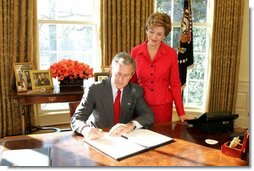 The steps to a healthy heart include preventing and controlling factors that can lead to heart disease--smoking, high blood pressure, high blood cholesterol, physical inactivity, obesity, and diabetes. By avoiding tobacco, limiting consumption of alcohol, exercising regularly, eating a nutritious diet, and maintaining a healthy weight, Americans can substantially reduce their risk of developing cardiovascular disease.

I also urge citizens to get routine preventative screenings and consult with their doctors. Through these commonsense steps, we can save many of the lives we might otherwise lose each year to heart disease.

Although heart disease is often associated with men, it is the leading cause of death for American women: Nearly 500,000 American women die from cardiovascular disease each year. The National Heart, Lung, and Blood Institute, part of the National Institutes of Health at the Department of Health and Human Services and other national organizations, have launched a national campaign called "The Heart Truth" to educate women about heart disease and to encourage them to make their health a priority. The symbol of "The Heart Truth" campaign is the red dress, which reminds women to talk with their doctors about heart disease and to make healthy choices. In addition, the American Heart Association has launched the "Go Red For Women" campaign to reach out to more women across our country. By continuing to raise public awareness about this deadly disease, we can help all our citizens lead healthier lives.

In recognition of the importance of the ongoing fight against heart disease, the Congress, by Joint Resolution approved December 30, 1963, as amended (77 Stat. 843; 36 U.S.C. 101), has requested that the President issue an annual proclamation designating February as "American Heart Month."

NOW, THEREFORE, I, GEORGE W. BUSH, President of the United States of America, do hereby proclaim February 2005 as American Heart Month, and I invite all Americans to participate in National Wear Red Day by wearing a red dress, shirt, or tie on February 4, 2005. I also invite the Governors of the States, the Commonwealth of Puerto Rico, officials of other areas subject to the jurisdiction of the United States, and the American people to join me in our continuing commitment to fighting heart disease.

IN WITNESS WHEREOF, I have hereunto set my hand this first day of February, in the year of our Lord two thousand five, and of the Independence of the United States of America the two hundred and twenty-ninth.