For Immediate Release
Office of the Press Secretary
January 28, 2005

THE PRESIDENT: Thank you all for coming. Laura and I are honored to be here. Over the past four years, America has benefited from the wise counsel of Dr. Condoleezza Rice and our family has been enriched by our friendship with this remarkable person. We love her -- I don't know if you're supposed to say that about the Secretary of State. (Laughter.) 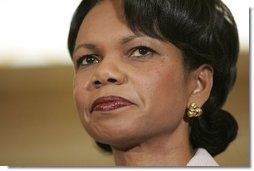 Condi's appointment and confirmation of Secretary of State marks a remarkable transition in what is already a career of outstanding service and accomplishment.

Today also marks an opportunity to honor another career defined by service and accomplishment. Throughout a lifetime spent in public service, Colin Powell has asked nothing in return. For over four decades, millions at home and abroad have benefited from his bravery, his dignity and his integrity. He's left our nation a better place than it was when he began his career in public service as a second lieutenant in the United States Army. His magnificent wife, Alma, I am certain is pleased that a grateful nation is giving back her husband -- (laughter) -- and all of us admire and appreciate the service of Colin Powell. (Applause.)

I appreciate the fact that Justice Ruth Bader Ginsburg administered the oath. It was neighborly of her to do that. (Laughter.) I want to thank Congresswoman Jane Harman from California for joining us, as well as Juanita Millender-McDonald from California. We're honored you both are here. Thanks for taking time to honor your fellow Californian, Condi Rice. (Applause.)

I see sitting between you two is a fine American in Andrew Young. Welcome, Andy. Thank you for coming. I shouldn't start going around the room, heralding all the -- (laughter) -- accomplished souls who are here. I do want to thank members of the diplomatic corps for coming. I appreciate Your Excellencies taking time to honor Condi. I want to thank the distinguished guests and members -- folks who work at the State Department for joining us, as well. It's a good thing to come and honor your new boss. (Laughter.) Good diplomacy. (Laughter.)

Colin Powell leaves big shoes to fill at the State Department, but Condi Rice is the right person to fill them. As National Security Advisor, she has led during a time when events not of our choosing have forced America to the leading edge of history. Condi has an abiding belief in the power of democracy to secure justice and liberty, and the inclusion of men and women of all races and religions in the courses that free nations chart for themselves.

A few days from now, these convictions will be confirmed by the Iraqi people, when they cast their ballots in Iraq's first free elections in generations. Sunday's election is the first step in a process that will allow Iraqis to write and pass a constitution that enshrines self-government and the rule of law. This history is changing the world, because the advent of democracy in Iraq will serve as a powerful example to reformers throughout the entire Middle East. On Sunday, the Iraqi people will be joining millions in others parts of the world who now decide their future through free votes. 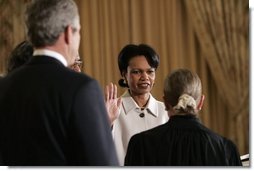 In Afghanistan, the people have voted in the first free presidential elections in that nation's 5,000-year history. The people of Ukraine have made clear their own desire for democracy. The Palestinians have just elected a new President who has repudiated violence. Freedom is on the march, and the world is better for it. (Applause.) Widespread hatred and radicalism cannot survive the advent of freedom and self-government. Our nation will be more secure, the world will be more peaceful, as freedom advances. Condi Rice understands that.

And the terrorists understand that, as well. And that is why they are now attacking Iraqi civilians in an effort to sabotage elections. We applaud the courage of ordinary Iraqis for their refusal to surrender their future to these killers.

No nation can build a safer and better world alone. The men and women of the State Department are doing a fine job of working with other nations to build on the momentum of freedom. I know our nation will be really well served when the good folks at the State Department join with Condi Rice to face the many challenges and opportunities that lie ahead. In the coming months and years, we must stop the proliferation of dangerous weapons and materials. We must safeguard and expand the freedom of international marketplace and free trade. We must advance justice and fundamental human rights. We must fight HIV/AIDS and other diseases and reduce poverty.

SECRETARY RICE: Thank you, Mr. President, for those wonderful remarks. I want to thank also First Lady Laura Bush. The President and Mrs. Bush have been really a strong support system for me here and good friends, and I want to thank you for that.

I want to thank the members of my family and my friends who are here -- a number are here from Birmingham, Alabama, and they represent generations of Rices and Rays, who believed that a day like this might somehow be possible.

I'm honored by your confidence in me, Mr. President, and I'm deeply grateful for the opportunity you've given me to serve as this country's 66th Secretary of State. 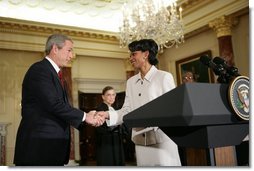 Let me say, too, in echoing the President's comments, that I'm, indeed, fortunate to succeed a man of the character and quality of Colin Powell, who served with such distinction, who's done so much to strengthen the State Department, so much to carry forward America's message and goals and so much to help me, personally, in so many ways.

In the past four years, America has seen great trials and great opportunities. Under your leadership, Mr. President, our nation has risen to meet the challenges of our time, fighting tyranny and terror and securing the blessings of freedom and prosperity for a new generation.

Now it's time to build on those achievements to make the world safer and even more free. We must use American diplomacy to help create a balance of power that favors freedom. The time for diplomacy is now. Standing for the cause of liberty is as old as our country itself. Indeed, it was our very first Secretary of State, Thomas Jefferson, who said, "The God who gave us life, gave us liberty at the same time." America's story is the story of men and women ceaselessly striving to ensure that we as a nation live up to the ideals set forth by our forefathers. Our founders realized that they, like all human beings, were flawed creatures, and that any government created by man would not be perfect. Even the great authors of our liberty sometimes fell short of their ideals -- even Thomas Jefferson, himself. Yet, our forebears established a democratic system of, by and for the people that contained within it the means for citizens and -- of conviction and of courage to correct its flaws.

The enduring principles enshrined in our Constitution made it possible for impatient patriots -- like Frederick Douglass, and Abraham Lincoln, and Martin Luther King -- to move us ever closer to our founding ideals. And so it is only natural that through the decades America would associate itself with those around the world who also strive to secure freedom for themselves and for their children.

September 11, 2001, made us see more clearly than ever how our values and our interests are linked and joined across the globe. That day of fire made us see that the best way to secure a world of peace and hope is to build a world of freedom. We do not simply seek the absence of terrorism. We seek a world where the aspirations for freedom of men and women triumph. Today, it is more fitting than ever that our nation should pursue a foreign policy that is grounded in democratic principles and aligns itself with the efforts of all those around the globe who share our love of liberty.

In all that lies ahead, the primary instrument of American diplomacy will be the Department of State, and the dedicated men and women of its foreign and civil services and our foreign service nationals. More than half a century ago, Dean Acheson and his officers stood present at the creation, in helping President Truman secure a world half free, while hoping that there would one day be a world fully free.

Mr. President, here with us today are some of the newest members of the State Department. The young officers here today are present at the transformation. And they will carry forward long into the future the work that we are undertaking to realize your vision of a world where all people live in freedom.

Under your leadership, Mr. President, we at the Department of State will conduct a foreign policy that sees the world clearly as it is. But, Mr. President, we will not accept that today's reality has to be tomorrow's. We will work in partnership with allies and reformers across the globe, putting the tools of diplomacy to work to unite, strengthen and widen the community of democracies.

We fully recognize that the hard work of freedom is the task of generations. Yet, it is also the urgent work that cannot be deferred. And, ultimately, the impatient souls all around the world who struggle and stumble and rise again to take up freedom's cause will succeed -- for the great mover of history is the power of the human spirit.

Mr. President, you have given us our mission, and we are ready to serve our great country and the cause of freedom for which it stands.