For Immediate Release
Office of the Press Secretary
January 10, 2005

THE PRESIDENT: Mr. Secretary, welcome back. I want to thank Secretary Powell and Andrew Natsios and Mike Brown and Marc Grossman for taking the lead on behalf of our government and the American people, and providing relief for the victims of the tsunamis.

The Secretary has given me a extensive briefing on what he has seen, on the unbelievable damage, particularly in Banda Aceh. He's also brought me up to date on the extraordinary efforts by the United States government and the United States people, along with governments around the world, to provide much needed relief to those who've suffered. We're now entering a second phase of providing for rehabilitation to these affected societies, as well as a reconstruction effort. 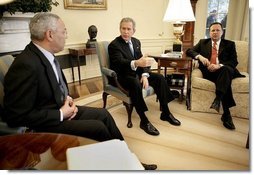 And as the Secretary said yesterday, the government of the United States is committed to helping the people who suffer. We're committed today, and we will be committed tomorrow. The outpouring of support from the citizens of our country has been more than heartening. It has been -- it has been very strong. And I want to thank those who have felt like -- felt the need to contribute directly to the relief efforts. I urge them to go to the usafreedomcorps.gov website to make sure that their cash contributions are funneled to programs which are having the necessary effect of providing relief, eventually rehabilitation and reconstruction, to those who have suffered.

And so, Mr. Secretary, I want to thank you. Andrew, I'm looking forward to going over to your headquarters to thanks those NGOs who have been working hard, as well as those in your agency who have worked so incredibly hard to show the compassion and decency of the American people during this time of extraordinary crisis.

Q Thank you, Mr. President. This long-term commitment by the United States to the Indian Ocean region, what specifically does that mean? Does it mean more dollars above the $350 million? What are you -- what are you prepared to do?

THE PRESIDENT: Well, we'll see. I think the important thing is to make sure that, as one person noted the other day, that the dollars are demand-driven. In other words, the key is to provide immediate relief, which we are doing, and then to work with governments and the United Nations to assess the needs -- the intermediate-term needs and the long-term needs -- to make sure the money that is available actually achieves a coordinated objective. And that's what we're in the process of doing.

In other words, these men went in -- in to make sure that the money that we had put up is being applied to provide necessary relief. And now we're in the process of helping to rehabilitate and reconstruct the societies. And they're beginning to focus -- the demand is beginning to focus, particularly on the Banda Aceh region. That is the part of the world that is going to require the most intense effort by our -- by the governments around the world.

THE PRESIDENT: Well, first, I want to offer my congratulations to Mr. Abu Mazen. I look forward to talking with him at the appropriate time. I look forward to welcoming him here to Washington if he chooses to come here. I look forward to helping to make sure that the conference in London, a conference all aimed at helping the Palestinians develop the institutions necessary to support Abu Mazen's vision of a peaceful, active, vibrant state, to become reality. And so we are -- this is a man who has been elected by what appears to be a good-sized vote. I'm heartened by the elections, and I'm also looking forward to the Iraqi elections on January the 30th.

Q Are there any steps that Israel can take to help the Abbas position? Any confidence-building measures? And Abbas called Israel the "Zionist enemy" on the campaign trail. Was that rhetoric helpful?

THE PRESIDENT: I think Israel did help with the elections. I know the Secretary worked hard on making it clear to Israel that it was very important that voters in Jerusalem be allowed to have access to the polls. And the initial reports we got back, and on the briefing that the Secretary gave me today about the initial reports on the election, was that there was better than good movement. I mean, it was better than we thought a month ago; that the Israelis did understand the need to have an election.

I think it's going to be very important for Israel to fulfill its obligation on the withdrawal from the territories that they have pledged to withdraw from. It is essential that Israel keep a vision of two states, living side by side in peace, and that as the Palestinians begin to develop the institutions of a state, that the Israeli government support the development of those institutions, and recognize that it is essential that there be a viable economy, that there be a viable health care system, that people be -- that people be allowed to start building a society that meets their hopes and needs. And Israel can play, and must play, an important part of the development of a Palestinian state.