For Immediate Release
Office of the Press Secretary
January 3, 2005

Q Mr. President, you have come this far; are you planning to extend your visit someday to India? It could be before your presidency --

THE PRESIDENT: I appreciate that very much. I was just telling the Ambassador, when I spoke to the Prime Minister I assured him that my intentions were to make it this year to India. In the meantime, though, our country stands with the people who've suffered. We want the Indian government, the Indian people to know that we'll help in any way we can. I've asked President Clinton and President Bush to lead an effort to raise private contributions to go to the families of those who have suffered, and to help provide food, medicine, water, shelter, whatever the Indian government thinks is necessary. 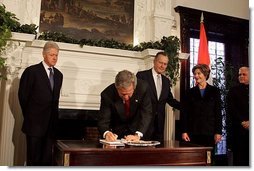 I want to thank the Indian government for taking a lead in this issue. One of the first things that we did was to put together a core group of nations, nations that are capable of organizing relief efforts around the region, and the Indian government has been especially strong, as a part of this core group. And I told the Ambassador to thank the Prime Minister for his very strong leadership.