For Immediate Release
Office of the Press Secretary
December 14, 2004

THE PRESIDENT: Good morning, and welcome to the White House. Laura and I are proud to have you all here today, especially our three honorees and their families and their friends.

The Presidential Medal of Freedom is our nation's highest civil award given to men and women of exceptional merit, integrity and achievement. Today this honor goes to three men who have played pivotal roles in great events, and whose efforts have made our country more secure and advanced the cause of human liberty. 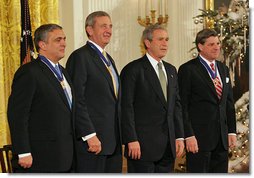 George Tenet learned the value of hard work as a bus boy in the 20th Century Diner, the family restaurant in Queens, New York. Between work and school and athletics, George always kept up with current events and world affairs, and that enthusiasm led him into public service.

In Washington, George immersed himself in the field of intelligence work. After a long career in the legislative and executive branches of government, George was tapped by President Bill Clinton to run the agency he loved. His challenges at the CIA were many. George acted quickly and aggressively to rebuild the Agency's capabilities. He made the recruitment of new talent a top priority. Applications to join the Agency have now soared or more than 138,000 per year. Under George's leadership, the number of yearly graduates from the Clandestine Service Training Program have increased nearly sixfold. And just about every CIA officer can tell you a story about Director Tenet's hands-on style of management. He was often seen in the hallways, chewing on an unlit cigar -- (laughter) -- or showing up at their cafeteria table and talking shop.

Early in his tenure as DCI, George Tenet was one of the first to recognize and address the growing threat to America from radical terrorist networks. Immediately after the attacks of September the 11th, George was ready with a plan to strike back at al Qaeda and to topple the Taliban. CIA officers were on the ground in Afghanistan within days. Seasoned American intelligence officers, armed with laptop computers, Afghan clothes and a visionary plan, rode horseback with the fighters of the Northern Alliance, identified key targets for our military and helped to free a nation.

Since those weeks, CIA officers have remained on the hunt for al Qaeda killers. More than three-quarters of al Qaeda key members and associates have been killed or detained, and the majority were stopped as a result of CIA efforts. CIA officers were also among the first to enter the battle in Iraq, alongside their colleagues in uniform.

In these years of challenge for our country, the men and women of the CIA have been on the front lines of an urgent cause, and the whole nation owes them our gratitude.

George is rightly proud of the people of the Agency, and I have been proud to work with George. George has carried great authority without putting on airs, because he remembers his roots. There's still a lot of Queens in George Tenet. (Laughter.) A colleague once said that "George has the intellect of a scholar and the demeanor of a longshoreman." (Laughter.) His tireless efforts have brought justice to America's enemies and greater security to the American people. And today, we honor a fine public servant and patriot in George John Tenet. (Applause.)

General Tommy Franks was raised in Midland, Texas -- nothing wrong with that. (Laughter.) I didn't know him then, but Laura and he went to the same high school. In those days, some people in Midland wondered about Tommy's future. It sounds familiar. (Laughter.) At a recent high school reunion, Tommy's old principal told the General, "You weren't the brightest bulb in the socket," to which the General replied, "Ain't this a great country?" (Laughter.)

America rewards talent, intelligence, and hard work, and the career of Tommy Franks is living proof. Tommy dropped out of college after two years to enlist in the Army. He quickly rose to become an officer, graduating from Officer Candidate School with honors, and beginning his ascent through the ranks. He went on to finish his degree and earn one more. And he made the best decision of his life when he asked a young lady named Cathy Carley to marry him.

Tommy Franks served in Germany and Korea, at the Pentagon, and at the Army War College. He served in the Persian Gulf War. He served in Vietnam where he was wounded twice. Yet his greatest challenges and his greatest service came after the attacks on September the 11th.

As the commander of CENTCOM, Tommy Franks held responsibility for defending American interests in some of the most remote and difficult terrain in the world. It's a job that requires the toughness of a general, the foresight of a strategist, the tact of a diplomat, and the skill of a good manager. Tommy Franks led the forces that fought and won two wars in the defense of the world's security, and helped liberate more than 50 million people from two of the worst tyrannies in the world.

In Afghanistan, America and our allies, with a historically small force and a brilliant strategy, defeated the Taliban in just a few short weeks. The General likes to say that "no plan ever survived the first contact with the enemy." But in Iraq, Tommy Franks' plan did. A force half the size of the force that won the Gulf War defeated Saddam Hussein's regime and reached Baghdad in less than a month, the fastest, longest armored advance in the history of America warfare.

Today the people of Iraq and Afghanistan are building a secure and permanent democratic future. One of the highest distinctions of history is to be called a liberator, and Tommy Franks will always carry that title.

General, the American people thank you for your courage, your leadership, and your lifetime of service in the cause of freedom and security. To the lists of medals and honors and awards you have already earned, I am proud to add the Presidential Medal of Freedom. (Applause.)

Jerry Bremer is a diplomat, a philanthropist, a businessman, and a fashion pioneer. (Laughter.) Everyone knows the Bremer look -- coat, dress shirt and tie, and desert combat boots. (Laughter.) Beyond the fashion statement, Jerry will be remembered for his superb work in laying the foundations of a new democracy in the Middle East.

Jerry Bremer's life of service began in 1966, when he joined the Foreign Service. He was a special assistant to six different Secretaries of State, and rose to become America's Ambassador to the Netherlands. In 1986, President Ronald Reagan appointed Jerry Ambassador-at-Large for Counterterrorism. Eventually, Speaker Hastert named him Chairman of the National Commission on Terrorism. And I chose him to serve on my Homeland Security Advisory Council.

When America and our coalition needed a seasoned diplomat and a manager to help the people of Iraq emerge from decades of oppression, I knew where to turn. For 14 months, Jerry Bremer worked day and night, in difficult, dangerous conditions, to stabilize the country, to help its people rebuild, and to establish a political process that would lead to justice and liberty. The job was demanding, requiring personal courage, calmness under fire and hundreds of decisions every day.

Yet, Jerry not only rose to the challenge, he found time nearly every day to study the Arabic language. Jerry Bremer earned the respect and admiration of Iraqis, and helped to assemble an exceptional group of Iraqi leaders for the Governing Council. With his help, these leaders drafted the Transitional Administrative Law which charted the country's political future and established a bill of rights. In the final days of hammering out consensus on this landmark law, Jerry sat through day-long meetings, sometimes without ever speaking. His silence was essential to reassure Iraqis that the new law was entirely their own. Yet his presence was essential to reassure Iraqis of our coalition's steadfast commitment to their future and their success. Every political benchmark that the Iraqis set for themselves and that Jerry helped them meet was achieved on time or ahead of schedule, including the transfer of sovereignty that ended his tenure.

Sometimes, Iraqi officials would express doubts that the day would ever come. Jerry would pick up a photo of his granddaughter and say, "This is your guarantee I'm leaving." (Laughter.)

Jerry, I know your wife, Francie, and your children, Paul and Leila, and your granddaughter, Sophia, are really glad to have you back.

When Jerry Bremer greeted visitors at his office in Baghdad, he always began, "Welcome to free Iraq." Jerry, Iraq is free today and you helped make it so. And a free Iraq will help make generations of Americans more secure. Our nation will always be grateful to Ambassador Jerry Bremer and his good work. (Applause.)

These three men symbolize the nobility of public service, the good character of our country, and the good influence of America on the world.

Now it is my honor to present the Presidential Medal of Freedom, and I ask the Military Aide to read the citations.

(The citations are read and the Medals of Freedom are presented.) (Applause.)

THE PRESIDENT: Thank you all for coming. Laura and I now invite you for a reception here to honor our honorees.