For Immediate Release
Office of the Press Secretary
December 9, 2004

THE PRESIDENT: Thank you all. Please be seated. Good morning. I'm pleased to announce my nomination of Ambassador Jim Nicholson to the -- to be the Secretary of Veterans Affairs.

Jim Nicholson is a patriot, a man of deep conviction who has answered his country's call many times. As a young man from Iowa, raised in modest circumstances, he became a cadet at West Point in the late 1950s, and went on to become an Army Ranger and paratrooper. As a Ranger, he fought in Vietnam, where he won multiple decorations for bravery in combat, including the Bronze Star and the Combat Infantry Badge. After eight years on active duty, he joined the Army Reserves, where he served for 22 more years before retiring as a full colonel. 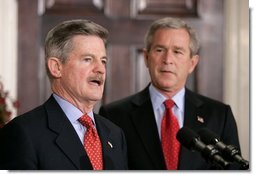 Throughout his career, Jim has shown the same honor, integrity and commitment to service that defined his life as a military officer. He and his wife, Suzanne, have given back generously to their community and have been leaders in numerous volunteer causes in their home state of Colorado. He was a respected chairman of the Republican National Committee. And for the past three years he has served as the United States Ambassador to the Vatican. Jim has worked with the Vatican to advance many vital foreign policy goals, including fighting poverty, hunger, AIDS, expanding religious liberty around the world, and ending the brutal practice of human trafficking.

I'm grateful to Jim for his superb work as our Ambassador, and I now have asked him to accept a new assignment, to serve his country and his fellow veterans.

As Secretary of Veterans Affairs, he will lead a department of more than 230,000 employees responsible for ensuring our nation's -- that our nation's veterans receive the health care and other benefits our country has promised them. Twenty-five million Americans are military veterans who stepped forward to serve when the nation needed them. The nation owes them in return a VA that is dedicated to effective, prompt attention to their needs. That has been a commitment of my administration for the last four years, and it will remain a commitment for the next four years.

When confirmed by the Senate, Jim Nicholson will succeed Tony Principi, who has been a fine member of my Cabinet. Secretary Principi is a man who insists on results, and he has gotten results. Thanks to his leadership, veterans and their families have seen many improvements in VA services. They're receiving better care, and their claims are processed more quickly. Tony Principi has made it the department's highest priority to assist veterans with service-related disabilities, low incomes, and other special needs. He's also launched a program to help homeless veterans find permanent housing. In all his work as Secretary of Veterans Affairs, Tony Principi has shown himself to be an outstanding executive, a friend to his fellow veterans, and a goodhearted man. I'm proud of his service, and I wish him and Liz all the very best.

Jim Nicholson will build on Tony Principi's achievements in continuing to modernize the VA, especially the VA health care system. Jim has the judgment and the character and the management expertise to do this job well.

I thank him for agreeing to serve. I also thank Suzanne and other members of their family. I want to thank their son, Nick and his wife, Charlotte; daughter, Katie, and son-in-law, Bo. I hope the Senate will confirm Jim Nicholson very soon. I look forward to welcoming him to my Cabinet.

Thank you, Mr. President. It's a real honor to be here in the White House with you and members of my family. I'm joined here today, as the President said, by my wonderful wife of 37 years, Suzanne; and by our son, Nick, and his wife, Charlotte; our daughter, Katie, and her husband, Bo. Our son, R.J., is unable to be with us today.

Mr. President, I am grateful to have represented our country at the Vatican and we will really miss Rome and our wonderful team at the U.S. Embassy to the Holy See. If confirmed by the Senate, it would be a singular honor for me to serve in your Cabinet as Secretary of the Department of Veterans Affairs.

At times like this, one tends to ponder their past. And when I think of growing up dirt poor in a tenant house without plumbing and sometimes without food, I marvel at America. The boy from Struble, Iowa may serve in the President's Cabinet. How could this happen? For me, it is because of the opportunities that my country gave me as a cadet at West Point and as a soldier. These experiences have defined my life, shaped my abilities and my desire to serve.

Mr. President, you are giving me yet another wonderful chance to serve my country, and a very special group of countrymen and countrywomen -- our veterans. As you have said, there are now more than 25 million veterans, and three-quarters of them have served during wars or hostilities. In addition, many of tomorrow's veterans are bravely defending America's freedom today in uniform abroad. All of our nations veterans, present and future, deserve strong leadership at the Department of Veterans Affairs. The Department has had such a leader in Secretary Tony Principi. I look forward to building upon his fine record, and I appreciate his experienced counsel and his continued friendship.

Our military is the pride of our country. We can't pay them enough to do the things that we ask of them -- the sacrifices, the separations, the heroics. They answer the call for one reason: Their country needs them. Our country depends on them and they have never, ever let us down. We must not let them down, either.

President George Washington spoke of our obligations to the veterans of the Revolutionary War. "As more of a common debt," he said, "it is a debt of honor." I know you feel the same way, Mr. President. You have made the health and well-being of our veterans an important priority of your administration. I will proudly join you in keeping those commitments, should I be confirmed. I am eager for the work ahead and I am grateful for the confidence.