For Immediate Release
Office of the Press Secretary
December 6, 2004

PRESIDENT BUSH: Mr. President, welcome to the Oval Office. Last time we met was in Georgia, and now you're here in Washington, D.C. and I'm really honored you're here.

First, I want to thank you for your courage and your vision for a united and free Iraq. The President and I just had a great conversation about the future of Iraq -- he can speak for himself, but I came away that I'm talking to a man who has got great confidence in the Iraqi people's capacity to self-govern and a great belief in the fact that it's going to happen. 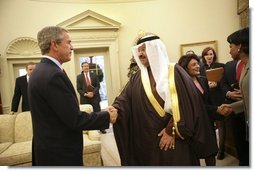 And the President can speak for himself on the subject, but he was very reassuring to me, as he was yesterday in his comments to the American people.

All in all, Mr. President, I am really proud you're here. I look forward to working with you.

PRESIDENT BUSH: And I look forward to achieving a common objective, which is an Iraq that is free and peaceful.

PRESIDENT AL-YAWER: Thank you very much, sir. I've been honored this morning to meet the President of the United States -- after all, we in Iraq are in debt for the United States for -- and the courageous leadership of President Bush of liberating Iraq from a dynasty, a villain. Right now we are faced with the armies of darkness who are -- who have no objective but to undermine the political process and incite civil war in Iraq. But I want to assure the whole world that this will never, ever happen; that we in Iraq are committed to move along. After all these sacrifices there is no way on earth that we will let it go in vain.

This is very important. Victory is not only possible, it's a fact, we can see it, it's there. We are committed. We see that we have all the reasons to prevail. We see that our enemy is an enemy that has only a short time because they have no roots in the Iraqi society, they have no ideology that they can sell to Iraq or the whole world.

There is unfairness by calling them Sunni insurgents

-- these are not Sunni. These are a mix of people who have one thing in common: hatred to the Iraqi society and hatred to democracy, people who are trying to stop us from having our first elections. We in Iraq, the whole Iraqi society are willing to participate in elections. Nobody in Iraq wants to boycott the elections, except for some politicians. But I'm talking about the mass public of Iraq; they all are very anxious to go and cast their votes and practice, for the first time in 45 years, their right and duty of voting for whoever they feel confidence in.

This is very important. And I just came here to tell the President of the United States and the American public that we in Iraq are very appreciative for all the sacrifices; that this is a job that we see has honor and even a duty that we have to make everybody free. In Iraq, these people are trying to kidnap people in streets and sell them from one gang to another. This is slavery, and shame on anybody who can condone to slavery. We are going to face them. We are determined. And God bless you, sir.

PRESIDENT BUSH: We'll answer a couple of questions in the spirit of democracy.

Q Mr. President, who do you think was behind today's attacks in Saudi Arabia, and what do you think was their motive? And on Iraq, if I could ask a little bit more, how can Iraqis feel secure about going to the polls on January 30th when there is so much violence and bloodshed?

PRESIDENT BUSH: First, on the incident in Saudi Arabia, I want to thank the Saudi government for responding as quickly as they did. We send our heartfelt condolences to the Saudi National Guard that died in the defense of our consulate. I want to thank the Marines for doing their job so splendidly. And we will find out more about who caused the attacks. As I understand it, several of the attackers died, but several were captured by the Saudi government, and I'm confident they will share the information with us.

You remember all the dire threats prior to the elections in Afghanistan. People said, if you vote in Afghanistan, you'll be killed. But the desire of people to vote overwhelmed the capacity of the terrorists. And this is the same message we're getting here in Iraq -- that people are willing to blow up people by the use of car bombs will do anything they can to stop democracy, and there is a reason why -- because a free society in Iraq will be a major defeat for the terrorists.

And I think that the capacity of these killers to stop an election would send a wrong signal to the world, and send a wrong signal to the Iraqi people, themselves. And the President has said that people want to vote, and I believe they ought to have a chance to vote. And we'll do everything we can, working with the Iraqis, to make the election sites as secure as possible. That's why the commanders on the ground have asked for additional troops -- to help with the election process. And I granted them that request, Mr. President. And our commanders, working with Ambassador Negroponte and the Iraqi security forces, believe they can do a lot to make these polling places secure. You can never guarantee a hundred percent security.

But Iraqi people have a chance to say to the world, we choose democracy over terrorism. And that's going to be defining moment in that country.

Are you Al Jazeera?

THE PRESIDENT: Yes. I appreciate that question. I am confident that when peoples are allowed to vote and express their will, peaceful societies emerge. And I'm confident that the process that has been set up by the international community to allow the people of Iraq to express their will is a major step in democracy in the greater Middle East. I believe the Iraqi people have got the capacity and the desire to self-govern. And these elections will be a very important moment in the advance of democracy.

The American people must understand that democracy just doesn't happen overnight. It is a process. It is an evolution. After all, look at our own history. We had great principles enunciated in our Declarations of Independence and our Constitution, yet, we had slavery for a hundred years. It takes a while for democracy to take hold. And this is a major first step in a society which enables people to express their beliefs and their opinions.

I also believe that success in Iraq will breed success elsewhere. I believe it is very possible for there to be a Palestinian state with the institutions of democracy in place that will allow for leadership to emerge that listens to the demands of the Palestinian people. And when such a state takes place, it will make peace much more possible with the Israelis. And so in a second term, not only will I work with our Iraqi friends to help them achieve democracy that the President has just said is the overwhelming desire of most people, but I'll also spend time and efforts to help the Palestinian people grow their own state and own democracy so we can achieve peace.

Q Senator Warner has raised some concerns about the chain of command issue in the intelligence reform bill. Is this bill going to have to wait until next year?