For Immediate Release
Office of the Press Secretary
December 2, 2004

PRESIDENT BUSH: Mr. President, welcome back, it's great to see you. I'm looking forward to working with you over the next years to strengthen our relationship, to work on a prosperous continent of Africa, to work with you on implementing our strategy to help defeat the pandemic of HIV/AIDS. I look forward to our discussion today. 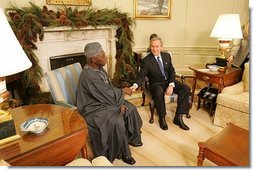 I particularly want to thank the President for his contributions to the peacekeeping forces of the African Union who have worked together on issues such as Liberia, Sudan and other important parts of the continent of Africa. I look forward to a fruitful relationship and I'm glad you're here. I want to welcome you, and thank you for coming, sir.

PRESIDENT OBASANJO: Mr. President, let me start by congratulating you once again. And let me express our appreciation for receiving me and my delegation so very early in your preparation for the second term. Of course, you are receiving me not only in my capacity as President of Nigeria, but also in my capacity as the Chairman of AU, continuing that organization.

I'm looking forward to this meeting to consolidate what we have been able to do together, like you have rightly said, in the area of peace and security and conflict resolution in Africa; in the area of trade and resource flow for Africa; and in the area of fight against terrorism by making the world -- particularly Africa -- a more peaceful and a more conducive continent to live in; and of course in the area of security, stability and availability of some of the essential resources for the development of the world, but the (inaudible) in the Gulf region of our continent. I'm looking forward to being able to work with you.

PRESIDENT BUSH: It's good to see you again, sir.

Scott, a couple of questions.

Q Thank you, Mr. President. Do you think questions of fraud in the U.N.'s Oil for Food program have hurt Kofi Annan, and do you think he should resign, as Senator Coleman has urged?

PRESIDENT BUSH: Yesterday I spoke about the United Nations, I said the United States participates in multi-lateral organizations, and we expect those organizations to be effective. You know, when an organization says there's going to be serious consequences if something doesn't happen, it better mean what it says.

Q Should he resign, sir?

PRESIDENT BUSH: I look forward to the full disclosure of the facts, a good, honest appraisal of that which went on. And it's important for the integrity of the organization to have a full and open disclosure of all that took place with the Oil for Food program.

Q Sir, should there be a new election in Ukraine, and should it be free of Russian influence? 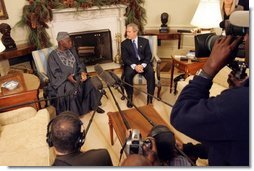 PRESIDENT BUSH: Well, I think any election, if there is one, ought to be free from any foreign influence. These elections ought to be open and fair. I appreciate the progress that is being made. I particularly want to again thank my friend, the President of Poland, the President of Lithuania, and the EU for its involvement in helping to resolve the Ukrainian election crisis.

The position of our government is that the will of the people must be known and heard. And, therefore, I will -- we will continue to monitor and be involved in a process that encourages there to be a peaceful resolution of this issue. And, you know, there are different options on the table and we're watching very carefully what is taking place. But any election in any country must be -- must reflect the will of the people and not that of any foreign government.

Q Mr. President, you're sending more troops to Iraq now. This comes on the heels of reports that Iraqi security forces appear to be under-performing, appear to be unprepared for elections in January. If that's the case, what would be so bad about postponing elections if there's the potential that those elections may be seen as illegitimate?

PRESIDENT BUSH: Well, first of all, the elections should not be postponed. It's time for the Iraqi citizens to go the polls. And that's why we are very firm on the January 30th date. Secondly, I have always said that I will listen to the requests of our commanders on the ground. And our commanders requested some troops delay their departure home and the expedition of other troops to help these elections go forward. And I honored their request.

And, thirdly, we are working hard to train Iraqis. And we have got certain benchmarks in mind. And General Petraeus is in charge of training the Iraqi troops, and the Iraqi ministers in charge of that are meeting the goals. And the idea, of course, and the strategy, of course, is have the Iraqis defend their own freedom. And we want to help them have their presidential elections. And at some point in time, when Iraq is able to defend itself against the terrorists who are trying to destroy democracy -- as I have said many times -- our troops will come home with the honor they have earned. 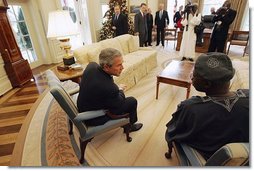 It's time for those people to vote, and I am looking forward to it. It's one of those moments in history where a lot of people will be amazed that a society has been transformed so quickly from one of tyranny and torture and mass graves, to one in which people are actually allowed to express themselves at the ballot.

Q As you march into the second term, what will Africa be looking forward to, in terms of America's contribution to security, especially in (inaudible.)

PRESIDENT BUSH: No, I appreciate that. First of all, Africa was a very important part of my first term. I have met with the President -- four or five times?

PRESIDENT BUSH: So many times, it's hard to count.

PRESIDENT OBASANJO: And at the G8, I think about 10 times.

PRESIDENT BUSH: Ten times. I have met with other leaders from the continent of Africa a lot. I have traveled to Africa. I have made the -- fighting the pandemic of HIV/AIDS a central part of my administration. I helped work to extend AGOA on the full belief that economic trade and the benefits of trade far exceed the benefits of direct aid. I've worked on a Millennium Challenge Account to help encourage the habits of good governance. And I will continue that focus and attention on the continent of Africa. I think it is vital that the continent of Africa be a place of freedom and democracy and prosperity and hope, where people can grow up and realize their dreams. It's a continent that has got vast potential, and the United States wants to help the people of Africa realize that potential.