For Immediate Release
Office of the First Lady
November 30, 2004

Red Room to be Highlighted in 2004 White House Christmas Card


President and Mrs. Bush highlight the Red Room of the White House in the 2004 White House Christmas card. Designed by Cindi Holt of Fort Worth, Texas, the original oil on canvas painting shows the room decorated for the holidays with a cranberry topiary and a glowing fireplace.

The inscription inside the card reads: 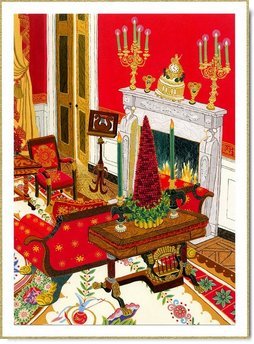 Let us come before him with thanksgiving and extol him with music and song. Psalm 95:2 (NIV)

May songs of joy fill your home with warmth and your heart with happiness this holiday season. 2004

President and Mrs. Bush will send out more than 2 million Christmas cards this year to friends, family and foreign dignitaries. The cards, bearing a Crawford, Texas postmark, will be mailed on Friday, November 26, 2004.

Cindi Holt has been painting for nearly 20 years. A self-taught artist, Holt began painting at the age of 34 when inspiration struck the California native who has called Fort Worth home since 1984. She began showing her work publicly in 1986 and had her first solo exhibition in 1989. When then Gov. George W. Bush and his wife Laura invited Holt to create the official Governor's Christmas card in 1998, her painting of the library in the Governor's Mansion prompted Holt to request permission to paint other rooms of the mansion. The result was a series of 12 paintings that went on tour to five Texas museums.

Clint Willour, Director of the Galveston Arts Center, described Holt's unique style of painting rooms as chalk-a-block with patterns and enlivened by furniture taking on human forms. "Walking through Holt's The Governor's Mansion exhibition is like taking a virtual reality tour with Walt Disney as director, Henri Matisse as cinematographer, and David Hockney as set designer."

Holt has participated in more than 45 exhibitions. Working on one painting at a time, she begins by making a line drawing of her subject. Then, as if turning her back on the specific place, she relies on her memory and imagination to tell the painting. Holt's painstaking technique allows her to create only six paintings in a year. In September 2005 Holt's paintings will be exhibited at Valley House Gallery in Dallas.