For Immediate Release
Office of the Press Secretary
November 21, 2004

PRESIDENT BUSH: Listen, thank you very much for coming, Mr. President. It's great to see you. 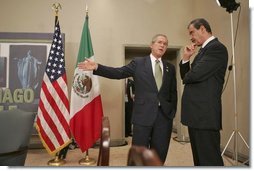 We've just had a very frank and constructive discussion about important issues regarding our two countries. I was very pleased to hear from the President that the economy in Mexico is growing, in large part thanks to his strong leadership. And that is very good news for the United States and our workers, because we have so much trade with Mexico.

We spent a great deal of time talking about the immigration issue. I told President Fox that I had campaigned on this issue; I made it very clear my position that we need to make sure that where there's a willing worker and a willing employer, that that job ought to be filled legally in cases where Americans will not fill that job. I explained to the President that we share a mutual concern to make sure our border is secure. One way to make sure the border is secure is to have reasonable immigration policies. And finally, I assured him that we want people from Mexico treated with respect and dignity.

I look forward to working with my friend over the next couple of years to get a lot done for the benefit of both our countries.

PRESIDENT FOX: Thank you very much, Mr. President. This has been a very good opportunity to discuss the issues on our bilateral agenda. And I think that our friendship, our relationship is strong, it's a very optimistic one, and I think that we will continue to build on it to make this partnership even stronger.

And the first thing is that Mexico wants to fulfill its responsibility to make its economy grow, make it stronger, to have more jobs in Mexico. That is our first priority. And in order to do this, what we discussed today is that we are looking to the future, we're looking to the future in economic development with the United States and our bilateral relationship, but also in the trilateral relationship with the region, in order to be able to grow, to generate more jobs and generate more opportunity.

And we're going to be working on this purpose in order to further what we're trying to achieve in the area of social security, in order to be ever more efficient and competitive. And the other thing that we hope to do is to be able to meet later on in Washington, D.C., and then finish off some of these issues we've been discussing, perhaps putting them in the shape of some form of agreement.

And as pointed out, this growth is leading to an increase in jobs, particularly in the border area, and this, in turn, generates more opportunities for our people.

And, finally, I extended my congratulations to President Bush on his reelection. We both stated that we are very willing to continue to build on our relationship and to do even more in the two remaining years of the Fox administration, and the next four years of the Bush administration.