For Immediate Release
Office of the Press Secretary
November 20, 2004

PRESIDENT BUSH: It was my honor to have spent some quality time with my friend, the leader of our strong ally, Japan. I enjoyed visiting with the Prime Minister. He's a man of clear vision and inner strength. 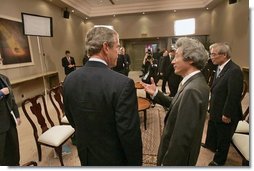 We covered a wide range of subjects, including the North Korean Peninsula and Iraq. I also explained to him that my nation is committed to a strong dollar, and I assured him that in my upcoming contacts in working with Congress, we'll work to reduce our short-term and long-term deficit.

It was a great conversation.

PRIME MINISTER KOIZUMI: I'm very happy to be able to see the President in person, the first time after his reelection. And we have shared a view that the U.S. had a great effect in terms of security and also in terms of the well-being of the world economy. And I completely agree with the view of the President that a strong dollar has good impact on the U.S. economy and is also important for the world economy.

And I was also gratified to know that President Bush has a strong intent for further strengthening the framework of cooperation, international cooperation, to cope with the issue of Iraq.

And we also agreed to continue to place importance on the six-party talks process concerning North Korea, and that we would also continue to pursue a diplomatic solution to dismantle all their nuclear programs.

It was a very short meeting, but it was a meeting of great content, so I'm very happy about that.

Q Yes, sir. Thank you. Can I ask you what level of flexibility you're willing to accept towards North Korea to try to bring them back to the table?

PRESIDENT BUSH: What's very important is for the leader of North Korea to understand that the six-party talks are -- will be the framework in which we continue to discuss the mutual goal we all have, which is to rid the Korean Peninsula of nuclear weapons, and that here, at this summit, I will not only speak with my friend, the Prime Minister of Japan, but also the President of South Korea, the President of China, and the President of Russia, about making sure that our intention remains the same, that we work together to achieve the goal. And the leader of North Korea will hear a common voice.

Somebody from the Japanese press?

Q Was there discussion concerning the realignment of U.S. force in Japan?

PRIME MINISTER KOIZUMI: We had a very good discussion from the viewpoint of maintaining the deterrence capability of U.S. force in Japan, and also of reducing the burden that the U.S. bases are posing on Japanese communities, including Okinawa. We had a good discussion from this kind of point of view. And we also agreed that we would have the relevant authorities -- the foreign ministry and defense authorities -- both countries have them discuss this issue in more detail.

Q Mr. President, given the intelligence failures over weapons of mass destruction in Iraq, do you think the U.S. now faces a more skeptical world in -- when it comes to the nuclear program in Iran?

PRESIDENT BUSH: We appreciate the efforts of the governments of France, Germany and Great Britain to convince the Iranians to give up any nuclear ambitions they may have. And the reason why they're involved is because they do believe that Iran has got nuclear ambitions, as do we, as do many around the world. And it's very important for the Iranian government to hear a -- to hear that we are concerned about their desires, and we're concerned about reports that show that prior to a certain international meeting, they're willing to speed up processing of materials that could lead to a nuclear weapon. This is a very serious matter; the world knows it's a serious matter, and we're working together to solve this matter.

Q There will be elections -- elections to be held in Iraq at the end of January next year, and I'd like to know if there were any discussions on what kind of efforts you will be making towards making this election a success?

PRIME MINISTER KOIZUMI: Successful reconstruction and nation-building in Iraq is just not an important matter for Japan and the United States, it's an issue for the entire international community. And, of course, there were some disagreements concerning the beginning of the use of force in that country in the international community, but the U.N. resolution providing for reconstruction efforts in Iraq was adopted by overwhelming consensus. And we have to make this effort into a success. And from that standpoint, Japan intends to continue to do as much as it can based on its own initiatives.

And I told Mr. President that we would like for him to leave it to us to decide what kind of assistance that we would be providing, and the President was agreeable to this.