For Immediate Release
Office of the Press Secretary
November 20, 2004

PRESIDENT BUSH: Mr. President, thank you for this very frank exchange. I told the President that I look forward to working with him over the next four years to continue our close work on keeping peace, peace on the Korean Peninsula and peace throughout the Pacific region, and to spread peace throughout the world. And I'm looking forward to working with him on those matters. 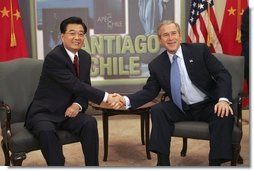 We also spent time talking about our economic relationships, about how we'll work over the next four years to continue to spread prosperity to both our people, to make sure the relationship is fair and equitable on both sides.

I invited President Hu to come and visit the United States as soon as he can, and he invited me to China. Neither of us committed because we don't have our schedules in front of us, but, nonetheless, we did commit to make sure our relationship is healthy and strong.

PRESIDENT HU: Friends from the press, I just had a talk with President Bush through which we covered many grounds. I first re-offered my congratulations to him on his re-election to the -- presidency of the United States. We together reviewed how much this relationship has come in the past four years. We expressed satisfaction over the positive programs made in a constructive and cooperative relationship between the two countries.

We agree that the second term of President Bush will be an important period for continued development of China-U.S. relations. We are also committed to stronger coordination and cooperation between the two countries on economic matters and in terrorism, as well as important international and regional issues.

We also exchanged views on the question of Taiwan. I expressed my high appreciation to President Bush's adherence to the one China policy and the three communiqus, and to his opposition to Taiwan independence.

We also discussed the nuclear issue on the Korean Peninsula. Both sides expressed the hope that the issue can be solved peacefully through dialogue.

I would like to thank President Bush for inviting me to visit the United States, and I have also invited him to visit China. Thank you, Mr. President.