For Immediate Release
Office of the Press Secretary
October 29, 2004

President Bush on Friday: "We Will Not be Intimidated"
Statement by the President
Toledo Express Airport
Toledo, Ohio

THE PRESIDENT: Earlier today I was informed of the tape that is now being analyzed by America's intelligence community. Let me make this very clear: Americans will not be intimidated or influenced by an enemy of our country. I'm sure Senator Kerry agrees with this. 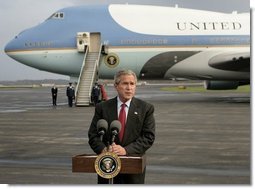 I also want to say to the American people that we're at war with these terrorists and I am confident that we will prevail.

Thank you very much. Thank you.