For Immediate Release
Office of the Press Secretary
October 7, 2004

THE PRESIDENT: Chief weapons inspector, Charles Duelfer, has now issued a comprehensive report that confirms the earlier conclusion of David Kay that Iraq did not have the weapons that our intelligence believed were there.

The Duelfer report also raises important new information about Saddam Hussein's defiance of the world and his intent and capability to develop weapons. The Duelfer report showed that Saddam was systematically gaming the system, using the U.N. oil-for-food program to try to influence countries and companies in an effort to undermine sanctions. He was doing so with the intent of restarting his weapons program, once the world looked away. 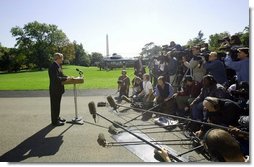 Based on all the information we have today, I believe we were right to take action, and America is safer today with Saddam Hussein in prison. He retained the knowledge, the materials, the means, and the intent to produce weapons of mass destruction. And he could have passed that knowledge on to our terrorist enemies. Saddam Hussein was a unique threat, a sworn enemy of our country, a state sponsor of terror, operating in the world's most volatile region. In a world after September the 11th, he was a threat we had to confront. And America and the world are safer for our actions.

The Duelfer report makes clear that much of the accumulated body of 12 years of our intelligence and that of our allies was wrong, and we must find out why and correct the flaws. The Silberman-Robb commission is now at work to do just that, and its work is important and essential. At a time of many threats in the world, the intelligence on which the President and members of Congress base their decisions must be better -- and it will be. 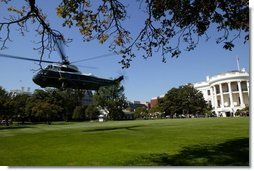