For Immediate Release
Office of the First Lady
October 7, 2004

Q It's good to see you again.

MRS. BUSH: Very nice, glad to be here. Thanks a lot.

Q I know you're very concerned about education and literacy. I just wonder if you saw our two young people -- those are --

MRS. BUSH: That's why we have education reform. (Laughter.)

Q I was cringing back there. I went, perhaps this isn't the night to show this. 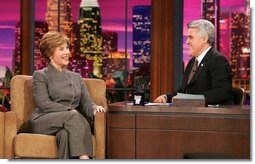 Q Are you surprised when you see that kind of thing?

MRS. BUSH: I am surprised, I'll have to admit, pretty surprised. I thought they were actors.

Going back to your natural blond then?

MRS. BUSH: Yes, exactly. Only my hairdresser knows for sure. (Laughter.)

Q It looks lovely. I know you're out here, you're campaigning. Where have you been in the last 24 hours?

MRS. BUSH: I left Washington yesterday morning. I came through Milwaukee and then Reno, ended up in California last night. And then this morning, I spoke to a very powerful group, the Fortune Magazine's Most Powerful Women group, which was really terrific. (Applause.)

And these are women who are leaders in every field, politics and business, a lot of business leaders. And one thing I think you'd be interested in is a lot of them are mentoring women in Afghanistan.

MRS. BUSH: They're working with women in Afghanistan, either to start businesses themselves, micro-businesses. Or one, like Pat Mitchell from Public Television, has mentored two women who want to be journalists. They've done a show which will be on television later this fall called Afghanistan Unveiled.

Q That's wonderful. My wife will be thrilled to hear that as well. (Applause.)

MRS. BUSH: Great. I hope she will be.

Q Well, you know, this seems like a turnaround, because you were somewhat reluctant to campaign at first. Now you're going gangbusters here.

MRS. BUSH: Well, it actually is pretty much fun.

Q Do you enjoy it now?

Q Did you have to do any sort of drills or anything, to overcome -- because to go -- and it's not just like you're in a little theater. I mean, my God, you're speaking to the whole nation. Do you have any things you do?

MRS. BUSH: Sure. I mean, first, I make sure I have a speech. Yes. That's the number one thing. And then, you know, I was a teacher and I was a librarian for years. And who would have ever guessed it, but I think that was actually pretty good practice.

Q Now, Oprah said -- I think it was Oprah said to get over public speaking you should picture the entire audience in their underwear. Now, when you're speaking to the nation, that can't be possible. 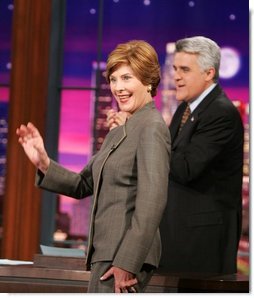 Q You don't want to do that. (Laughter.)

Now, I remember your husband promised you that you'll never have to -- look, honey just go with me on this governor thing and as we move along, I'll never make you get up -- wasn't that --

MRS. BUSH: That was the promise. It was actually our prenuptial agreement.

MRS. BUSH: This was back in 1977 when we married, he was thinking about running for Congress, which he did, in our home district in the Panhandle of Texas. So I said, you'll have to promise me I'll never have to give a political speech. And he said, oh, no, of course, you'll never have to. So much for political promises. (Laughter.)

But also, I have to admit, I promised I'd jog with him, too. And I never did.

Q You never did?

Q Well, okay, so that works. One cancels out the other.

Let me ask you, when you watch these debates, is it hard for you? Does it make you nervous?

MRS. BUSH: Sure, absolutely. I'm very, very nervous, much more nervous than he is, obviously. I watched it from the very front row. I was with Barbara and Jenna, my girls were with me. And Senator John McCain was on my aisle when I was watching it. And, of course, it's very different to watch it in person than it is on television.

Q How about like -- being somewhat dyslexic, anybody who watches this monologue, I trip over my words. And occasionally, your husband will make a gaffe, which we will exploit to the hilt. (Laughter.) I mean, do you guys have fun with that afterwards?

MRS. BUSH: We do. We laugh about it sometimes. Sometimes, we don't laugh. (Laughter and applause.)

But actually, the fact is, he gives hundreds of speeches and he'll give three or four in a day. And, you know, after that amount of time, it's easy to make a mistake or two.

Q How about the faces? Because everyone seemed to say he would kind of grimace --

MRS. BUSH: That he was scowling?

MRS. BUSH: I didn't see that. I was on the very front row and in person that didn't really show up that much. But I think he said this morning that anyone who listened to his opponent say that many things about him would have to make a face. (Applause.)

Q When you don't have botox, you can actually move your face. (Laughter and applause.)

We'll be right back with the First Lady right after this. (Applause.)

Q Welcome back. We're back with the First Lady, Laura Bush. I wonder -- I know how my wife is when somebody attacks me. She gets very -- I kind of let it roll off. And your husband, he seems -- he goes, oh, it's politics, people just saying that. But do you take it a little personal sometimes?

Of course I do. You know, it's really hard. It's much harder I think for the person who loves the candidate to hear the bad things and the negative things.

Q Do you turn off the pundits?

Q Or do you like to listen to them?

Q No matter which side, don't want to hear it. Now, you've met Teresa Kerry?

MRS. BUSH: We met at the debate.

Q That was the first time you met?

MRS. BUSH: That was the first time we'd met. And I could tell we had a lot in common. We even chose the same color suits to wear for that night. (Laughter.)

Q That's right. I had a joke but didn't do it. I can't remember what it was. (Laughter.) That's right, you had the same outfit.

Q It must seem odd, because you two really have a lot in common.

MRS. BUSH: We do, really. I really do feel like we're members of a club. We're the only ones who know right now what it's like for your husband to run for President in 2004, and I'm sure we'd have a lot to talk about.

Q Now, your -- the daughters are out campaigning.

MRS. BUSH: The girls are with me. Jenna is with me tonight.

Q Jenna is sitting right over there. (Applause.)

MRS. BUSH: And it's been really fun to have them with George and me. Funny and lively and I'm sure everyone can tell. And they -- it's just relaxing and fun for us to have them.

MRS. BUSH: No. They just, you know, complain about helmet hair that they think I have. (Laughter.)

Q No, see, I commented on it, the first thing I told you, it looks very nice.

MRS. BUSH: But it actually is great. They introduced me, Jenna introduced me this week when -- yesterday in Milwaukee and Reno, and it's really pretty terrific to hear your girls say a lot of nice things about you in public. (Laughter.)

Q Now, Jenna got into -- I don't think this is trouble; it looked like just being silly. A photographer got -- show that picture. (Laughter.)

MRS. BUSH: Jenna, I'm sorry they had to show that.

Q Now what brought that on?

MRS. BUSH: I think it actually was they were being silly. Barbara and Jenna and her dad were all in the car. And George told me -- I was on a hiking trip. I was in Glacier National Park so I didn't know one thing about it. But when I got home he said, Jenna turned around and said, I just stuck my tongue out. And he said, well you'll be on the front page of the paper tomorrow, and she was -- (laughter) -- pretty embarrassed.

Q What do they want to do now? What are they seeing --

MRS. BUSH: Actually, that happens to Barbara and Jenna now on the campaign trail, when they make campaign stops. People will have their -- boys will have their Bush-Cheney sign held up with their own phone number written at the bottom.

Q Now, what's worse, the girls come home with a criminal or a Democrat? (Laughter.)

MRS. BUSH: Well, you heard Jenna's line at the Republican convention, just after Arnold spoke and then I spoke, and Jenna introduced me, and she thanked Arnold for allowing her to marry a Democrat if she wants to, because he had done that. (Laughter.)

Q Let's talk about the gender gap. Obviously you're out there, you're appealing to all voters, well, women voters too. But it's bigger this year than it's been before. Women are 52 percent of the vote or something like that?

Q Now, where will you spend Election Night?

MRS. BUSH: We'll travel in to Crawford on that Monday night, get up and vote the next day, and fly in to Washington. So on actual Election Night, we'll be in Washington.

Q Oh, okay. And now, in Crawford, do you have like a special satellite? Or you've just got the TV with the two things, doing this -- (laughter) -- trying to --

MRS. BUSH: We have a satellite. (Laughter.)

Q Oh, moving on up down there in Crawford. (Laughter.)

Q Oh, there's no cable down in Crawford?

Q Now the neighbors complain, them Bushes got that big dish out there on the lawn -- (laughter).

Q Well, cool. Listen, you got a chance to meet -- I know you have to run now, but you met our spaceship guys.

MRS. BUSH: I met them, and they're great. And the President had called them and talked to them and congratulated them. And so I'm really excited to get to meet them back stage. They're geniuses.

Q Oh, yes, they really are. And they'll be out here in a second.

Listen, thank you for stopping by on your tour.

MRS. BUSH: Thanks so much, Jay.