For Immediate Release
Office of the Press Secretary
September 23, 2004

The United States has a unique legal and political relationship with Indian tribes and a special relationship with Alaska Native entities as provided in the Constitution of the United States, treaties, and Federal statutes. Presidents for decades have recognized this relationship. President Nixon announced a national policy of self-determination for Indian tribes in 1970. More recently, Executive Order 13175, entitled Consultation and Coordination with Indian Tribal Governments, was issued in 2000. I reiterated my Administration's adherence to a government-to-government relationship and support for tribal sovereignty and self-determination earlier this year in Executive Order 13336, entitled American Indian and Alaska Native Education. 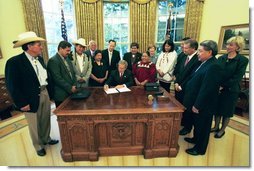 This commitment begins at the White House, where my Director of Intergovernmental Affairs serves as my White House liaison with all Indian nations and works with federally recognized tribal governments on an intergovernmental basis. Moreover, it is critical that all departments and agencies adhere to these principles and work with tribal governments in a manner that cultivates mutual respect and fosters greater understanding to reinforce these principles.

Accordingly, the head of each executive department and agency (agency) shall continue to ensure to the greatest extent practicable and as permitted by United States law that the agency's working relationship with federally recognized tribal governments fully respects the rights of self-government and self-determination due tribal governments. Department or agency inquiries regarding this memorandum, specifically those related to regulatory, legislative, or budgetary issues, should be directed to the Office of Management and Budget.

This memorandum is intended only to improve the internal management of the executive branch and is not intended to, and does not, create any right, benefit, or trust responsibility, substantive or procedural, enforceable at law or in equity, by a party against the United States, its agencies, entities, or instrumentalities, its officers or employees, or any other person.