For Immediate Release
Office of the Press Secretary
September 15, 2004 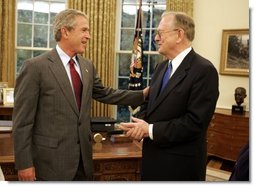 The President intends to nominate Francis J. Harvey, of California, to be Secretary of the Army. Dr. Harvey currently serves as Vice Chairman of Duratek, Inc., in Columbia, Maryland. Dr. Harvey also held a number of executive positions throughout his twenty-eight year career at Westinghouse Electric Corporation. As President of the Corporation's Defense and Electronics Systems Group, he was involved in systems development and production programs for surface ships, submarines, aircraft, tanks, missiles, and satellites. Dr. Harvey earned his bachelor's degree from the University of Notre Dame and his Ph.D. from the University of Pennsylvania.