For Immediate Release
Office of the Press Secretary
September 11, 2004

THE PRESIDENT: Good morning. This is a day of remembrance for our country. And I am honored to be joined at the White House today by Americans who lost so much in the terrible events of September the 11th, 2001, and have felt that loss every day since.

Three years ago, the struggle of good against evil was compressed into a single morning. In the space of only 102 minutes, our country lost more citizens than were lost in the attack on Pearl Harbor. Time has passed, but the memories do not fade. We remember the images of fire, and the final calls of love, and the courage of rescuers who saw death and did not flee. 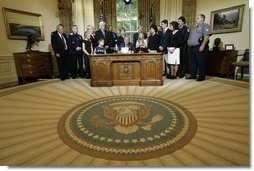 We remember the cruelty of enemies who murdered the innocent, and rejoiced in our suffering. We remember the many good lives that ended too soon -- which no one had the right to take.

And our nation remembers the families left behind to carry a burden of sorrow. They have shown courage of their own. And with the help of God's grace, and with support from one another, the families of terror victims have shown a strength that survives all hurt. Each of them remains in the thoughts and prayers of the American people.

The terrorist attacks on September the 11th were a turning point for our nation. We saw the goals of a determined enemy: to expand the scale of their murder, and force America to retreat from the world. And our nation accepted a mission: We will defeat this enemy.

The United States of America is determined to guard our homeland against future attacks. As the September the 11th Commission concluded, our country is safer than we were three years ago, but we are not yet safe.

So every day, many thousands of dedicated men and women are on duty -- as air marshals, airport screeners, cargo inspectors, border patrol officers, and first responders. At the same time, Americans serving in the FBI and CIA are performing their daily work with professionalism, while we reform those agencies to see the dangers around the next corner. Our country is grateful to all our fellow citizens who watch for the enemy, and answer the alarms, and guard America by their vigilance.

The United States is determined to stay on the offensive, and to pursue the terrorists wherever they train, or sleep, or attempt to set down roots. We have conducted this campaign from the mountains of Afghanistan, to the heart of the Middle East, to the horn of Africa, to the islands of the Philippines, to hidden cells within our own country.

More than three-quarters of al Qaeda's key members and associates have been detained or killed. We know that there is still a danger to America. So we will not relent until the terrorists who plot murder against our people are found and dealt with.

The United States is also determined to advance democracy in the broader Middle East, because freedom will bring the peace and security we all want. When the peoples of that region are given new hope and lives of dignity, they will let go of old hatreds and resentments, and the terrorists will find fewer recruits. And as governments of that region join in the fight against terror instead of harboring terrorists, America and the world will be more secure. Our present work in Iraq and Afghanistan is difficult. It is also historic and essential. By our commitment and sacrifice today, we will help transform the Middle East, and increase the safety of our children and grandchildren.

Since September the 11th, the sacrifices in the war on terror have fallen most heavily on members of our military, and their families. Our nation is grateful to the brave men and women who are taking risks on our behalf at this hour.

And America will never forget the ones who have fallen -- men and women last seen doing their duty, whose names we will honor forever.

The war on terror goes on. The resolve of our nation is still being tested. And in the face of danger we are showing our character. Three years after the attack on our country, Americans remain strong and resolute, patient in a just cause, and confident of the victory to come.